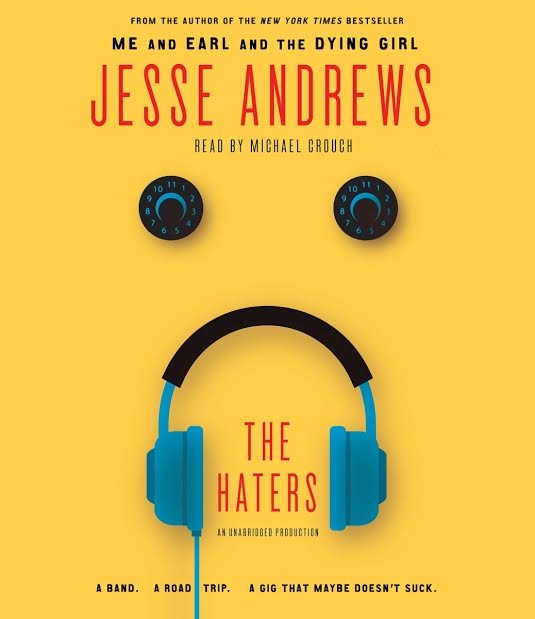 YABC: THE HATERS is at times absolutely hilarious and also emotionally intense. How difficult is it to maintain that contrast between humor and the dramatic while narrating?

Michael Crouch: First of all, I’m so glad you’re interested! Thank you. I’m such a geek for this stuff. To answer your question, when I worked onThe Haters I didn’t focus specifically on either element. My attitude is that the humor and emotion come from the same place: a connection to the scene — to the life underneath the words. If I understand the characters and ground myself in the scene, the humor and drama will unfold naturally.

YABC: What was your favorite scene in THE HATERS and why?

MC: Hmm… One that really stands out to me is the scene where Wes and Corey are on the roof, stoned out of their minds. Actually, this is a great example of how the humor and drama are so connected. Like, the only way Corey’s ridiculous sobbing will be funny is if I wholeheartedly commit to the grief he’s experiencing in that moment. When I ride that wave, it’s fun to see what happens.

MC: The scene at Ed and Charlize’s house was challenging to narrate. It was tricky to jump back and forth between the husband and wife’s testy banter and the trio’s “um, wtf is happening” awkwardness. It took a lot of concentration.

YABC: Do you come up with each character’s individual voice on your own, or with guidance from the author or audio director? Are the voices influenced by people you know or have met?

MC: I come up with the voices on my own, but I refer to the director if I have questions or if I’m not happy with what I’ve come up with. At this point, many of the voices I use are inspired by other characters I’ve recorded. Some are based on people I know, but mostly not. For example, I’ll take the personality or sound of a character I played in a previous audiobook and adjust it to fit a character in The Haters – but only if it makes sense. You have to play around with it. The most important element is the character’s personality. If I’m committed to embodying how he/she thinks and behaves, I may not need to change my voice at all.

YABC: Which of the character’s voices is most like your own?

MC: Definitely Wes. Unless the text suggests otherwise, I always make the narrator’s voice closest to my own. Because A) It helps the narration flow more naturally, and B) It’s just easier!

YABC: Do you get to interact with the author while working on the audio?

MC: As the narrator, usually not–that’s typically the producer’s job. In my experience the author has never been directly involved with the recording. For The Haters I was in the studio with executive producer/director Sarah Jaffe and engineers Jayme Mattler and Tyler Whitlatch. They were awesome.

YABC: How many times do you read the novel while working on the audio?

MC: Once, pretty thoroughly. I look up unfamiliar words and bookmark each new character. Then I skim through the book a second time and make notes in the margins, making sure I understand the subtext — that life underneath the words — for each scene. I read from an iPad and use an app called iAnnotate. One thing I find helpful is to highlight different characters’ dialogue in different colors. For instance, in preparation for The Haters I highlighted Ash’s dialogue in blue and Corey’s in green. It helps with the constant jumping between voices.

YABC: What kind of audio work do you do besides audiobook narration?

MC: I do commercials, dubbing for animé (Yu-Gi-Oh! Arc-V, Pokémon), industrials, some animation, things like that! I love it.

YABC: What can we look forward to from you next?

MC: I recently narrated a very powerful memoir called BOY ERASED by Garrard Conley. Beautiful, heartfelt writing. The book and audio will be released May 10th. Michael Crouch is a New York-based actor specializing in voice-over.  His credits span a variety of genres, including national commercials, animated series, promos, video games, and audiobooks.  He holds a BFA in Musical Theatre from Ithaca College and is a proud member of SAG-AFTRA. From Jesse Andrews, author of the New York Times bestselling Me and Earl and the Dying Girl and screenwriter of the Sundance award–winning motion picture of the same name, comes a groundbreaking young adult novel about music, love, friendship, and freedom as three young musicians follow a quest to escape the law long enough to play the amazing show they hope (but also doubt) they have in them.

Inspired by the years he spent playing bass in a band himself, The Haters is Jesse Andrews’s road trip adventure about a trio of jazz-camp escapees who, against every realistic expectation, become a band.

For Wes and his best friend, Corey, jazz camp turns out to be lame. It’s pretty much all dudes talking in Jazz Voice. But then they jam with Ash, a charismatic girl with an unusual sound, and the three just click. It’s three and a half hours of pure musical magic, and Ash makes a decision: They need to hit the road. Because the road, not summer camp, is where bands get good. Before Wes and Corey know it, they’re in Ash’s SUV heading south, and The Haters Summer of Hate Tour has begun.

In his second novel, Andrews again brings his brilliant and distinctive voice to YA, in the perfect book for music lovers, fans of The Commitments and High Fidelity, or anyone who has ever loved—and hated—a song or a band. This witty, funny coming-of-age novel is contemporary fiction at its best.

Jesse Andrews’s debut novel, Me and Earl and the Dying Girl, a New York Times and USA Today bestseller, was published to critical acclaim and starred reviews. His adaptation of the book for the big screen won both the Grand Jury Prize and the Audience Award at the 2015 Sundance Film Festival. Jesse is also a musician and screenwriter. He lives in Boston, Massachusetts. Visit Jesse at www.jesseandrews.com.

Five winners will each receive a copy of the audio CD of Jesse Andrews’ THE HATERS, narrated by Michael Crouch. (US only).

4 thoughts on “Interview with Michael Crouch, Voice of The Haters, Plus Giveaway!”

You are here: Interview with Michael Crouch, Voice of The Haters, Plus Giveaway!