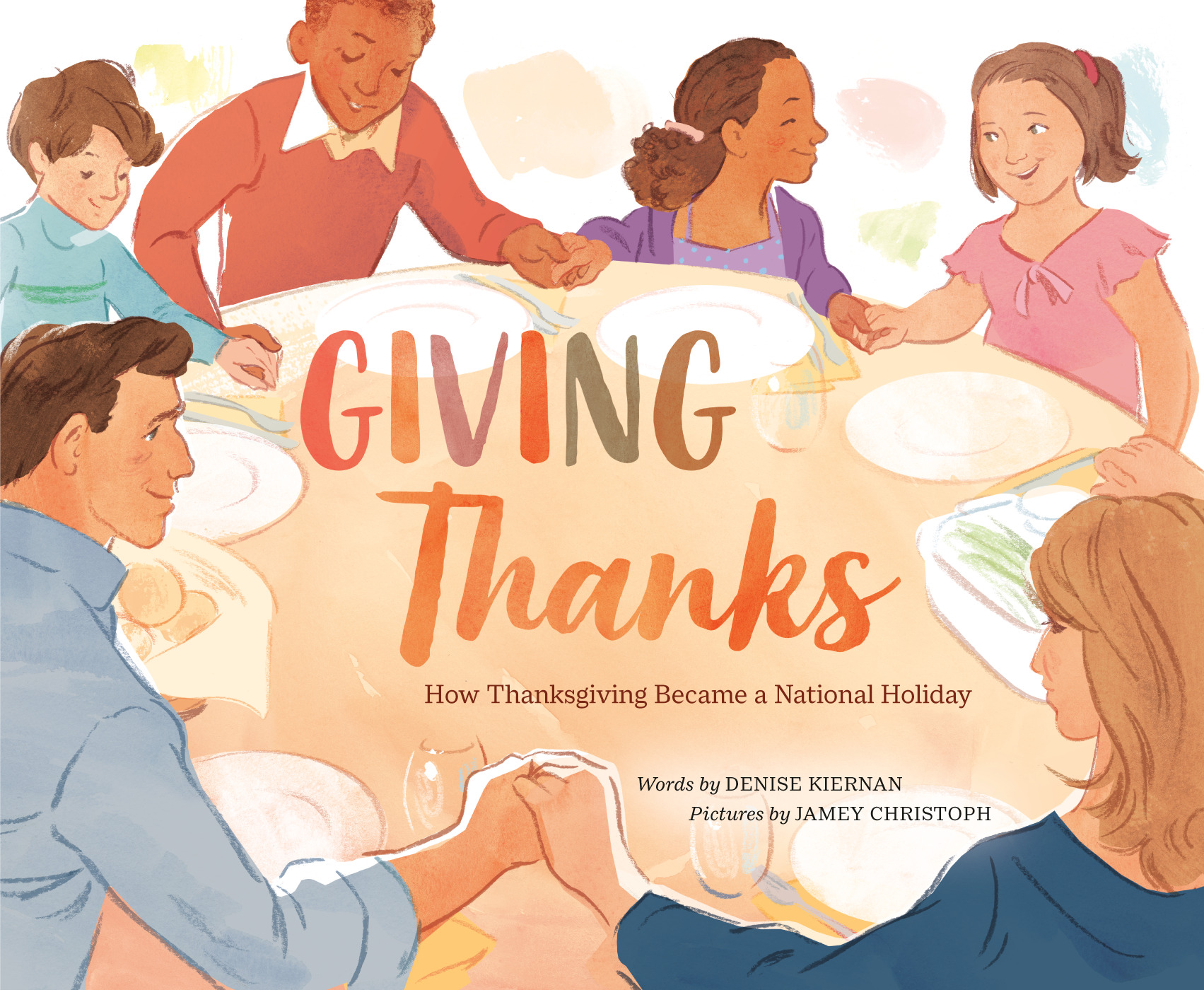 Giving Thanks: How Thanksgiving Became a National Holiday!

Read on for more about Denise and Giving Thanks! 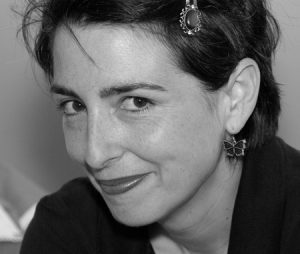 Denise Kiernan (she/her) is an American journalist, producer and New York Times bestselling author. She has written several history books, including We Gather Together, The Last Castle, and The Girls of Atomic City. When not writing, she likes playing tennis, watching soccer, working in her garden, and cooking tasty treats at her home in North Carolina. Visit her online at denisekiernan.com. Follow her on Instagram (@iamdenisekiernan) and on Twitter (@DeniseKiernan).

About Giving Thanks: How Thanksgiving Became a National Holiday: 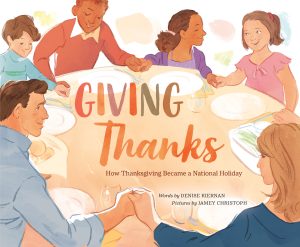 The beautifully illustrated true story of how Thanksgiving became a national holiday in America, of Sarah Josepha Hale, the woman who made the holiday happen, and of the role of gratitude the world over. Marvelously brought to life by the New York Times bestselling author Denise Kiernan.

All across the world, among hundreds of cultures and across centuries, people have come together to give thanks. But Americans didn’t have an official Thanksgiving holiday until the 1800s. The holiday Americans know today exists because of a woman named Sarah Josepha Hale, a spirited letter-writing campaign, a sympathetic president, and a civil war.

This beautifully illustrated picture book shares the true story of how Thanksgiving became a national American holiday and offers a look at the timeless and global power of gratitude.

She was an influencer more than 150 years before the first post appeared on Instagram…. She told people across the country how to host and entertain more than a century before Martha Stewart was born. And she accomplished all this while living in the 19th century as a widowed mother of five with no formal education.

Sarah Josepha Hale hardly had time to do much of anything, let alone write. Yet she became one of the most important magazine and book editors of her time—and changed the course of American culture along the way.

Giving Thanks is the true story of how Sarah Josepha Hale fought to make Thanksgiving an American tradition. It tells the story of how Abraham Lincoln help Hale’s dream become a reality. More importantly, the story is a reminder of the importance of living a life steeped in gratitude.

Sarah Josepha Hale’s magazine, Godey’s Lady’s Book, had one of the largest readerships in the United States. Her publication told readers what to wear, how to cook, whose books to read… As the magazine’s “editress”—as she called herself—Hale wielded a unique kind of power at a point in history when she didn’t even have the right to vote.

But her work was more than just a way to sell copies of her magazine. She promoted the writing of other women and shared their talents. She used her media pulpit to raise funds for libraries, military veterans, their widows, monuments to their memory, and more.

Despite the limits society placed on her because of her gender, Hale’s influence has carried through to the present day. She’s the one who encouraged young brides to wear white dresses on their wedding days. She’s the one who first encouraged Americans to decorate their homes each December with Christmas trees—a novel idea imported from Europe.

Hale had petitioned president after president before Abraham Lincoln to proclaim a day of thanksgiving for all the nation. All the earlier presidents said no. But Lincoln agreed. At the end of November 1863, Hale and Lincoln, through their combined efforts, helped establish the annual Thanksgiving tradition Americans continue to this day.

When Lincoln issued his first national Thanksgiving proclamation on October 3, 1863, his message landed in the midst of the Civil War. It was difficult for citizens to hear and absorb his message that “[t] he year that is drawing to its close, has been filled with the blessings of fruitful fields and healthful skies…” Despite the war, Lincoln saw that the nation teemed with bounties and gracious gifts, and advances in industry. He invited citizens “in every part of the United States, and also those who are at sea and those who are sojourning in foreign lands,” to join him in thanksgiving the last Thursday of November. Not every one agreed, and certainly not everyone participated, but an annual tradition began to take hold.

The mind-blowing thing about this story is that neither Hale nor Lincoln were thinking about Pilgrims or the event that took place in 1621 when they invented the holiday that we feel we know so well. They were thinking instead of a way to unite a divided nation. In fact, the power of embracing gratitude during trying times—from the Civil War and World War I through the Spanish Flu—is a thread that runs often through my mind and my stories. The importance of gratitude is something that is now also supported by modern scientific research. Yes, it is true: gratitude heals.

No wonder I wanted to write about Thanksgiving, not just for adults, but for kids as well. (My adult title is called We Gather Together.) I see this as a story of thanks that matters to all. An inspirational message for both grown-ups and kids. The books are a new way to look at American history through the lens of gratitude.

That said, how could we—and how do some of us—follow Sarah Josepha Hale’s lead today?

Hale worked for decades on something that mattered to her. She didn’t live long enough to see Congress pass a law to make Thanksgiving an official holiday, but she’s the reason it happened. She had no idea that her efforts would change the course of American culture, but they did.

You never know the positive impact you can have on the world around you.

Stay true to your values, and act on what you believe in. Never give up.

Book’s Title: Giving Thanks: How Thanksgiving Became a National Holiday

You are here: Guest Post with Author Denise Kiernan (Giving Thanks: How Thanksgiving Became a National Holiday)