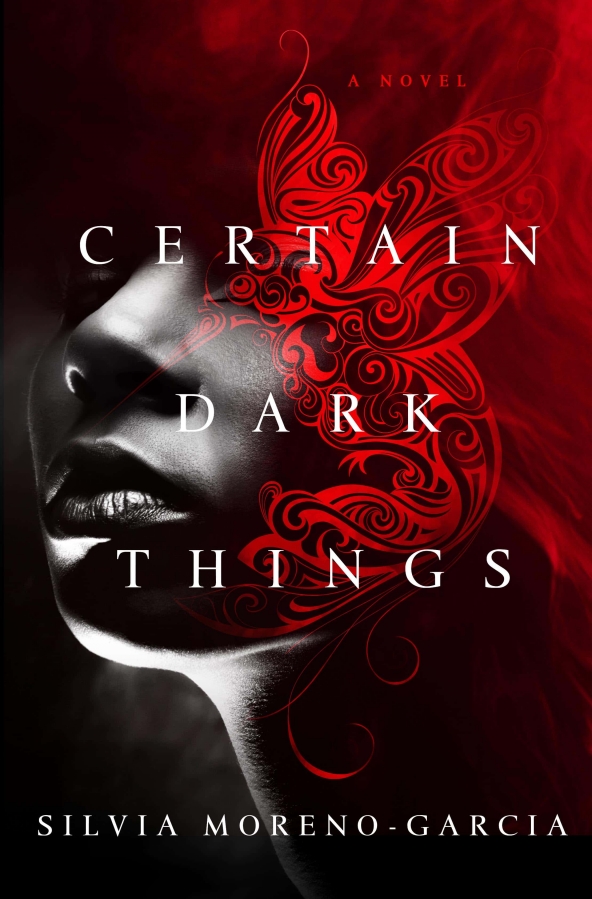 Below you’ll find more about Silvia,

her book, plus a

SILVIA MORENO-GARCIA: I wrote a short story called “A Puddle of Blood” for an anthology a few years ago, and it featured the main characters, Atl and Domingo, plus the basic plot: a vampire on the run in Mexico City. I thought the idea could be expanded so I turned it into a novel. I wanted to combine my interest in noirs (especially Mexican noirs) with a fantastical element. Plus, it’s not like there’s a monstrous amount of Mexican vampire novels.

SILVIA MORENO-GARCIA: I like all my characters. That said, I enjoyed the voice of Domingo, who is a street-kid that makes a living picking garbage. He is an optimist, and I was trying to strike the right note between naïve and foolish. He contrasts well with this world of grime and violence. He is a bright light. That said, if I ever wrote a sequel it would probably be because of Bernardino, who is a secondary character.

YABC: Which came first, the title or the novel?
SILVIA MORENO-GARCIA: The original title was Young Blood. None of my novels have retained their original titles. I’m getting used to that.

YABC: Thinking way back to the beginning, what’s the most important thing you’ve learned as a writer

SILVIA MORENO-GARCIA: I write too short. My tendency is to write 70,000 word books but there doesn’t seem to be too much of a market for that, at least in the speculative fiction category. This harks back probably to my interest in fiction from the 70s, when spec books were still very slim. I also have to say my desire for lean prose, ala Bukowski, doesn’t seem to go well with editors. There’s always notes about “describe more,” so I’m attempting to do that. My basic desire is for something very stripped down, with fire-rapid dialogue. Someone once asked me why I wasn’t a play writer instead. Good question.

SILVIA MORENO-GARCIA: I was happy that they didn’t have a model who was white for the cover. That’s something that has happened to novelists frequently, even a few years ago. Publishers used to keep non-white characters off the covers for fear they wouldn’t sell. This is changing. John Picacio, the award-winning artist, talks a bit about this issue with the design of one of his recent book cover paintings (link: http://johnpicacio.com/onthefront/2016/07/05/the-last-adventure-of-constance-verity/). I’d like John to do the cover for one of my books one day, incidentally

SILVIA MORENO-GARCIA: I am doing edits on The Beautiful Ones, which is my next novel. It’s a love triangle involving a performer with telekinetic powers, set in a world inspired by the Belle Epoque. I also guest-edited an issue of Nightmare Magazine. It should be on sale right now.

SILVIA MORENO-GARCIA: It wasn’t trouble, but Ana Aguirre was expanded, I think I ended up adding one or two more chapters from her POV. I’m a very lean writer and like I said, there is not a lot of appetite for 70,000 word books. The editor, and everyone who read the final draft, seemed to love Ana, so she was one of the characters who received an expansion. Ana is a human detective who is trying to solve a murder, and ends up in the middle of a vampire gang rivalry. And yes, she is named after a writer who is a friend of mine. Hint: Bronze Gods.

SILVIA MORENO-GARCIA: I’m organized and disciplined. That may not seem like much, but when you work a full-time job and do other stuff, like writing, on the side, it comes in handy. There’s no secret to writing except actually writing, which oddly enough is something a lot of people have trouble with, just sitting down and doing the work. SILVIA MORENO-GARCIA is the author of the critically-acclaimed novel Signal to Noise and the short story collection This Strange Way of Dying, which was a finalist for the Sunburst Award in Canada. She was a finalist for the Manchester Fiction Prize, and a recipient of the Gloria Vanderbilt/Exile Award for Best Emerging Writer.

Two winners will receive a copy of Certain Dark Things (US only).
*Click the Rafflecopter link below to
enter the giveaway*

6 thoughts on “Author Chat with Silvia Moreno-Garcia, Plus Giveaway!”

You are here: Author Chat with Silvia Moreno-Garcia, Plus Giveaway!