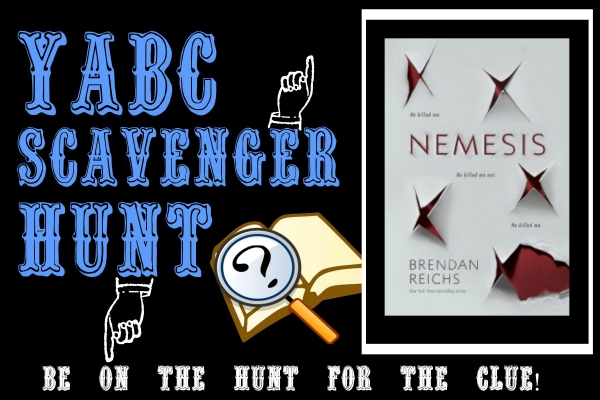 Today we’re excited to share Brendan Reichs’ playlist inspired by his novel, Nemesis as part of the YABC Scavenger Hunt! Read on for more about Brendan, his novel, and an extra giveaway! And don’t forget to answer the question from this post on the Scavenger Hunt form for a chance to win the Grand Prize! Brendan Reichs was born and raised in Charlotte, North Carolina. He graduated from Wake Forest University in 2000 and The George Washington University School of Law in 2006. After three long years working as a litigation attorney, he abandoned the trade to write full time. He lives in Charlotte with his wife, son, daughter, and a herd of animals that tear up everything. It’s been happening since Min was eight. Every two years, on her birthday, a strange man finds her and murders her in cold blood. But hours later, she wakes up in a clearing just outside her tiny Idaho hometown—alone, unhurt, and with all evidence of the horrifying crime erased.Across the valley, Noah just wants to be like everyone else. But he’s not. Nightmares of murder and death plague him, though he does his best to hide the signs. But when the world around him begins to spiral toward panic and destruction, Noah discovers that people have been lying to him his whole life. Everything changes in an eye blink.For the planet has a bigger problem. The Anvil, an enormous asteroid threatening all life on Earth, leaves little room for two troubled teens. Yet on her sixteenth birthday, as she cowers in her bedroom, hoping not to die for the fifth time, Min has had enough. She vows to discover what is happening in Fire Lake and uncovers a lifetime of lies: a vast conspiracy involving the sixty-four students of her sophomore class, one that may be even more sinister than the murders.

a Rafflecopter giveaway
**And for a chance at the YABC Scavenger Hunt Grand Prize,
continue to the OFFICIAL ENTRY FORM. When completed, submit your entry by clicking the Rafflecopter post below.