I don’t know about you, but I am SUPER HYPED for the release of The Hunger Games: Mockingjay Part 2 in just a couple of weeks! The Hunger Games movies have been some of the best book-to-movie adaptations ever done (in my opinion!) and I can’t way to see Katniss and Gale and the rest of the team on the big screen again.
I’m sure all librarians have a go-to set of read-alikes for The Hunger Games books, and I wanted to offer some newer releases to help update that list! So here are some standalones and series that would be perfect to offer to your Hunger Games fans after they finish Mockingjay for the 5th or maybe 50th time.
Imagine a world where your destiny has already been decided…by your future self. It’s Callie’s seventeenth birthday and, like everyone else, she’s eagerly awaiting her vision―a memory sent back in time to sculpt each citizen into the person they’re meant to be. A world-class swimmer. A renowned scientist. Or in Callie’s case, a criminal. In her vision, she sees herself murdering her gifted younger sister. Before she can process what it means, Callie is arrested and placed in Limbo―a hellish prison for those destined to break the law. With the help of her childhood crush, Logan, a boy she hasn’t spoken to in five years, she escapes. But on the run from her future, as well as the government, Callie sets in motion a chain of events that she hopes will change her fate. If not, she must figure out how to protect her sister from the biggest threat of all—Callie, herself.
Kristen Simmons has created an eerily realistic dystopian world, then thrown her characters into the toughest situation they could imagine, and they fight for their freedom harder than anything. The Glass Arrow is a masterpiece of feminist fiction that teens and adults will love. I highly recommend this standalone novel for anyone looking for a strong story with a kickass female protagonist!
NIL is a story of survival and self-discovery. When Charley is mysteriously transported to the unmapped island of Nil she must learn the rules and survive a year of deadly animals, gate-hunting, and new romance. Nil is a beautiful island paradise, haunted by the ghosts of those who have gone before and the howls of whatever dangerous beasts have been dropped in by gates. Charley is taken into Nil City by Thad, the current Leader, and initiated into the tribe of teenagers Searching for their personal gates out of there. NIL was a fast-paced page-turner that kept me up late at night until I finished it. I very highly recommend it! Lynne Matson’s debut is a masterpiece of survival science fiction!
THE CAGE is the first in a compelling new science fiction series from popular YA author, Megan Shepherd. ALIENATED (Melissa Landers) meets NIL (Lynne Matson) in this sci-fi romance survival adventure. With exquisitely crafted world-building, a tantalizing romance, and thrilling character dynamics, THE CAGE is a page-turning intro to a series that YA readers will fall in love with.
Told in dual perspectives, NOW THAT YOU’RE HERE is the first book in a duology called “Duplexity” – in which one of the protagonists is transported from one parallel world into another. Teens looking for a new and interesting outlook on paranormal romance will love the first book in the Duplexity series. The contrasting points of view and hints of Danny’s alternate reality will keep readers turning the pages.
In WHILE YOU WERE GONE Nichols turns the tables and we get the story from Danny’s point of view. Discover the secrets of the alternate dimension Danny is sucked into and how the political turmoil in that world will affect the safety of all possible worlds. 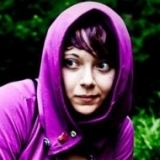 Eden Grey is the Young Adult Programming Librarian at the Erlanger branch of the Kenton County Public Library system, the busiest branch library in the state of Kentucky. Eden is a contributor to Teen Services Underground, and reviews books for YABC and School Library Journal. When she is not herding cats -ahem, teens- at the library, Eden can be found reading, knitting, sewing, cosplaying, and playing Pokemon. You can always find her on Twitter (@edyngrey), and Blogging Between the Lines.

Tags: Dystopian, Recommendations, The Hunger Games, The Librarians Corner, We Read YA