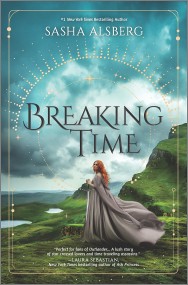 Fate brought them together. Time will tear them apart.
When a mysterious Scotsman suddenly appears in the middle of the road, Klara thinks the biggest problem is whether she hit him with her car. But, as impossible as it sounds, Callum has stepped out of another time, and it’s just the beginning of a deadly adventure.

Klara will soon learn that she is the last Pillar of Time—an anchor point in the timeline of the world and a hiding place for a rogue goddess’s magic. Callum believes he’s fated to protect her at all costs after being unable to protect the previous Pillar, his best friend, Thomas. A dark force is hunting the Pillars to claim the power of the goddess—and Klara and Callum are the only two people standing in the way. Thrown together by fate, the two have to learn to trust each other and work together…but they’ll need to protect their hearts from one another if they’re going to survive.

What I Liked: As a fan of Outlander, I was ready to like this book just on the premise. Klara and her dad have an inn in Scotland after her mother passed away. Callum is an orphan that scrapes together a living as a bar fighter in 1568. He ends up in the present after he finds his friend, Tom, mortally wounded by a shadowed man of superhuman strength that he grabs hold of as he disappears into another time.
Most of the plot is easy to predict but still fun to read. I enjoyed Callum trying to maneuver his way through the magic of modern technology. It was fun seeing our world through his eyes. He was surprisingly open-minded about Klara being a modern girl. There were plenty of times that he was able to use his manly muscles to save her as they find out she is a pillar of time.
Their evolving romance from strangers to something more was enjoyable. There was plenty of heat and feelings while staying a clean romance. She hides everything from her dad which I found disappointing. He is supportive of her even when it appears she has run off with a handsome stranger for no reason throwing away her choice of going to college.
The ending was totally unexpected. I thought we were headed to a standalone book with all things neatly wrapped up. That is not how it ends at all. I don’t want to give spoilers but I need the sequel to come out soon so I can make sure one of them isn’t truly dead.