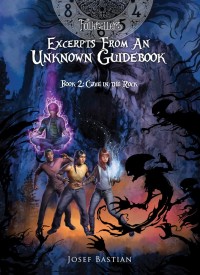 In every age, across time and space, there have been Folktellers. These are the select few who have been chosen to collect and share the stories that must be told. Aaron, Wendy, Jake, and Eddie Little Bear must come to grips with the fact that their troubles are growing, their lives are intertwined, and an even greater horror waits for them—just inside the Cave in the Rock.

Books hold the key to the past and the future.

What worked:
The Folktellers are the most powerful characters, although they don’t cast spells or wield super abilities. They travel to different dimensions and times, but their impact comes from their Guidebooks and telling stories. They’re sent on missions to locate people and tell them stories that they need to hear. Their tales are recorded in leather-bound books, and these Guidebooks become the focus of the plot. Shadow People are the Folktellers’ nemeses, although they’re scattered across the dimensions. However, they’ve stolen a Guidebook, and its information might lead them to a portal across all dimensions. Opening the portal will allow them to unite and form a formidable army that will wreak chaos.
The book switches focus between three main characters: Wendy, Aaron, and Jake. Wendy’s primary mission is to protect the portal from the Shadow People, but she’s only recently become a Storyteller. It seems like she understands the gist of it, but much of her learning is on the job. She thinks she’s found a mentor, but that relationship becomes complicated. Eddie Little Bear joins the cast and shares information about Native American culture while helping Wendy navigate the Cave in the Rock. Aaron’s Storytelling character presents a subplot, as he’s struck by a cruel spell that is slowly killing him. Jake searches for the cure but time is running out, as Aaron’s body will succumb to the spell in a matter of days.
The potential within books is a major theme, as the Guidebooks are the powerful tools wielded by the Storytellers. The stories are used to inspire readers and listeners and help them with their problems and everyday lives. Wendy’s book contains many strange-sounding chapters, but there’s always one that fits her situation. Each book is connected to a key that acts as a homing device and opens up new possibilities. The key to Wendy’s Guidebook proves to be a game-changer.
What didn’t work as well:
References are made to events from the first book in the series, but there are still unanswered questions. The Shadow People don’t have distinct physical features, don’t talk, and don’t interact with characters unless they’re attacking. It’s clear they’re dangerous and should be stopped, but they’re vague antagonists. However, this book can still be enjoyed without reading the prior one. It’s not recommended, but it can be done.
The Final Verdict:
Books hold the key to the past and the future. The concept of Folktellers managing books as supernatural tools is novel, although the books themselves are the star of the show. The characters perform the tasks, but the Guidebooks and Transit portal seem to be in control. The overall story is very entertaining, and I’m anxious to read the sequel. I recommend you give this book a shot!

You are here: Middle-Grade Review: Cave in the Rock (Folktellers Excerpts from an Unknown Guidebook #2) by Josef Bastian