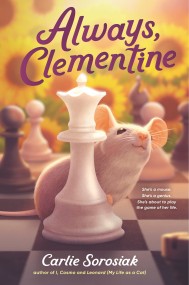 Clementine is different from other mice: she can calculate the speed of light and she dreams in Latin. The scientists say she’s a genius and put her through test after test. Clementine is proud of being a good lab mouse, but she’s lonely. Her only snatches of friendship occur during her late-night visits with a chimpanzee named Rosie. When a compassionate lab technician frees Clementine, the mouse discovers an outside world full of wonders: Brussels sprouts, games of speed chess, television fame, and a chance for a real home. But for Clementine, it’s not enough to be free when she knows that Rosie and the other mice are not. This tender, lively adventure story, narrated in letters from a mouse to a chimpanzee, shows us that goodness is something we have to define for ourselves—and that courage and wisdom aren’t proportionate to size.

Becoming the true you.

What worked:
The format of the story is unique as Clementine writes imaginary letters to her chimpanzee friend stuck in the experimental laboratory. The opening and closing of each letter (chapter) are often directed specifically to Rosie, but most of the time the narration sounds like most other first-person novels. The book’s title comes from a fruit Clementine enjoys eating and it’s phrased in the way she ends each letter. She may like clementine oranges but she loves brussels sprouts and mentions them frequently.
The story reminds me a bit of the Newbery winner Mrs. Frisby and the Rats of NIMH with an escaped lab animal displaying amazing intellect. Clementine’s DNA is altered making her a genius, even compared to most humans. The author doesn’t spend much time describing her escape from the lab and quickly moves the plot to Clementine being discovered by a kind man named Pops and his grandson Gus. The conflict is created when the laboratory comes looking for Clementine and Pops and Gus try to figure out a way to protect her. A complication is Clementine’s very noticeable raspberry scent that may lead to her doom. Clementine easily learns and masters the game of chess so Pops thinks there might be a way to use it to save her.
The story includes several other issues beyond the main conflict of Clementine versus the lab. Pops was a chess champion but readers don’t know why he’s refused to play for many years. It’s an internal conflict that’s revealed later. Gus has problems with self-confidence since his father’s always on his case for making mistakes or bad decisions. Gus constantly thinks of himself as being stupid or a troublemaker and it takes his relationships with Gus and Pops to finally change. Even Clementine realizes she has a self-image problem because of her time in the lab. She realizes everyone is more than what others think of them.
What didn’t work as well:
Using mental letters to represent chapters is unique and clever but it isn’t really necessary. I keep reminding myself that Rosie isn’t receiving the letters and the narrative mostly sounds like any other first-person novel anyhow. However, the story is engaging and the emotional letters display Clementine’s devotion and commitment to helping Rosie.
The Final Verdict:
The author weaves a tender, caring tale through a collection of letters that emphasizes the importance of friendship, empathy, and social justice. The abuse of lab animals is the impetus for the book and forms the center of the conflict. I highly recommend you give this book a shot, especially if you’re a lover of small animals.

You are here: Middle-Grade Review: Always, Clementine by Carlie Sorosiak