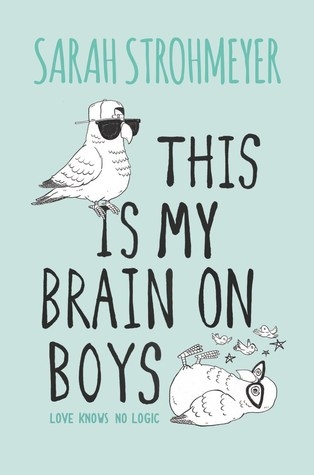 Addie Emerson doesn’t believe in love, at least for herself. A straightlaced, brilliant girl, she’s more interested in getting an A than falling in love. But Addie is determined to prove the science of love—because Addie Emerson does believe in science.

Science tells her that “love” is nothing more than the brain’s state under the influence of certain chemicals. And by artificially stimulating those chemicals, the brain can totally be tricked into falling in love. So Addie decides to apply that knowledge—and make her classmates fall in love—to win the coveted Athenian Award for Science in her elite private school. One way to speed up the process—adrenaline—she’ll put her classmates in dangerous, high-risk situations . . . and research the fallout.

But a mysterious new guy keeps messing with her plans. And she kind of can’t stop thinking about his gorgeous brown eyes. With backstabbing competitors—including her former lab partner, the preppy, wealthier-than-thou Dex—and more than one pair of star-crossed lovers—can Addie manage to salvage her experiment and win the Athenian? And what happens if she does the unthinkable—and falls in love?

YA Contemporary, THIS IS MY BRAIN ON BOYS has caught my attention from the very beginning of the story. It is told from the narrator, Addie Emerson, who is on a plane with a boy. (And yes, I think it’s an adorable meet cute that will make rom-com writers and directors proud.) (And for your information, I’m never ever, ever going to get tired of meet cutes. They are too adorable and swoonworthy to give up.)

Let’s start with the narrator. Addie Emerson is so similar to Temperance Bones, the title character of the tv show running on Fox. She has a lot of logic and intelligence gained from books and papers, but she lacks emotional intelligence gained from socializing and relationships. But despite all of her setbacks, she is endearing in her social faux pas and she is totally oblivious to anything pertaining to emotions (and more importantly, love). I enjoy reading her voice, but it’s hard to empathize with her. (Then again, there are very few people who can empathize with those who understand the complexities of neurology.)

The irony… Oh, my gosh. The irony in this book gives me life. I won’t read and tell spoilers, but I have to acknowledge the greatest irony in the book. I must give my kudos to the author, and I must point out the absolute and hilarious ignorance of one Addie Emerson and the very experiment she is conducting.

The plot moves steadily along, taking me for a ride. There is some weirdness, a couple of nerds, a shark, a crazy experiment involving gerbils and humans, a backstabbing partner (whose double-sided nature is revealed much later in the novel than I predicted), and a cute guy. But I take it all in, and I keep flipping the pages and finish this book much, much sooner than I should have. (A misfortune, because I would love to read this story much longer and stick around in this fictional world.)

The ending is absolutely perfect. Though it’s not exactly realistic (but I’ll ignore it), it’s perfect for this book. It’s the kind of closure a reader needs after a “Will they, won’t they?” romance.

Overall, THIS IS MY BRAIN ON BOYS is the kind of story that a science girl could appreciate. It’s not without irony, great levels of cuteness rivaling kittens, and a subtle humor. This is it for those who love a romance that isn’t so easy but is worth it.

You are here: Featured Review: This Is My Brain On Boys by Sarah Strohmeyer