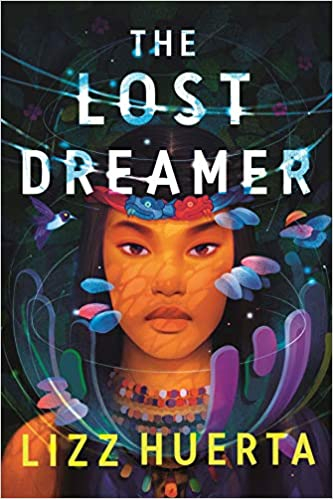 A stunning YA fantasy inspired by ancient Mesoamerica, this gripping debut introduces us to a lineage of seers defiantly resisting the shifting patriarchal state that would see them destroyed―perfect for fans of Tomi Adeyemi and Sabaa Tahir.

Indir is a Dreamer, descended from a long line of seers; able to see beyond reality, she carries the rare gift of Dreaming truth. But when the beloved king dies, his son has no respect for this time-honored tradition. King Alcan wants an opportunity to bring the Dreamers to a permanent end―an opportunity Indir will give him if he discovers the two secrets she is struggling to keep. As violent change shakes Indir’s world to its core, she is forced to make an impossible choice: fight for her home or fight to survive.

Saya is a seer, but not a Dreamer―she has never been formally trained. Her mother exploits her daughter’s gift, passing it off as her own as they travel from village to village, never staying in one place too long. Almost as if they’re running from something. Almost as if they’re being hunted. When Saya loses the necklace she’s worn since birth, she discovers that seeing isn’t her only gift―and begins to suspect that everything she knows about her life has been a carefully-constructed lie. As she comes to distrust the only family she’s ever known, Saya will do what she’s never done before, go where she’s never been, and risk it all in the search of answers.

With a detailed, supernaturally-charged setting and topical themes of patriarchal power and female strength, Lizz Huerta’s The Lost Dreamer brings an ancient world to life, mirroring the challenges of our modern one.

THE LOST DREAMER is an atmospheric and lush YA fantasy. Told from two perspectives, the story follows Indir and Saya. Indir is a Dreamer in Alcanzeh, one of a select few who have been gifted the ability to travel to the spirit world and see truths, possibilities, and/or futures. However, she is harboring a secret. Since she Dreamed a dangerous Dream for the previous king, her ability to Dream has disappeared. Alcanzeh is changing – the king’s son, Alcan, has returned from his time among the Fire Warriors to claim his spot on the throne. However, he is poisonous, changing and disrespecting their traditions and threatening the world they all know.

Saya Dreams, but she is not a Dreamer. She has lived with her mother, traveling and hiding from something unknown. Her mother has given her a necklace to protect her, which she never takes off. As she Dreams and learns about the people of the town where they currently reside, she must tell her mother everything, and her mother exploits these Dreams for her own financial gain, passing them off as her own and lying when it suits her. However, Saya is becoming an age where she may be able to determine her own future, as the spirits she speaks to begin to suggest.

As each Indir and Saya follow the paths laid before them, the world as they know it hangs in the balance.

What I loved: This was an absolutely lush and riveting fantasy read. Both Indir and Saya have intriguing stories with glimpses into the broader world that build in a really unique way. Based on ancient Mesoamerican mythology, this is an intricately woven and fascinating world. Both Indir and Saya are compelling characters, and I appreciated both of their character arcs, where they are growing and evolving, both really experiencing a coming-of-age during the story, deciding who they will be and how they will relate to the world around them. While it could be challenging to move between them, the splits were well done, reaching just the right place before changing to the other, to keep the reader engaged and involved in both stories.

An intriguing element throughout the book was around consent. For any interactions (platonic, healing, etc.), the characters ask permission before doing anything to another, even touching. I found this to be a really strong and important element of the story. Other themes around traditions, sacrifice, religion, protection and when it crosses to oppression, sisterhood, friendship, the value of honesty, community, and honor are also really thought-provoking and make this a strong read that merits some discussion and further consideration in a book group.

What left me wanting more: As a small thing, the beginning of the book moves slowly as there are a large number of characters to keep straight. The reader will flip back and forth to remember all the names/relationships, but this gets easier a little further into the story once established.

Final verdict: Intricately woven with compelling characters, THE LOST DREAMER is a riveting and lush YA fantasy that is sure to enchant readers. I will eagerly be awaiting the next installment to continue Indir and Saya’s stories. Highly recommend for fans of RAYBEARER, AN EMBER IN THE ASHES, and SKYHUNTER.

You are here: Featured Review: The Lost Dreamer (Lizz Huerta)