Time for another cover reveal! Huzzah!

Today we’re celebrating the cover for GILDED by Christina Farley, releasing March 1, 2014 from Skyscape. But before we get to the cover, we have a special message from Christina and the cover designer, as well as a video Christina made just for you!

Hey guys!
I’m so excited to celebrate the cover reveal for GILDED here at YABC! I’ve been anxiously waiting to share it with you because it’s just …. perfect (Yes, that was me sighing with delight).
There is so much to love about this cover, and I’m indebted to the Skyscape team, specifically to Katrina Damkoehler, the mastermind behind this project; to my brilliant editor, Miriam Juskowicz for all of her input; and to Cliff Nielsen, for drawing the most beautiful samjoko (mythological 3-legged crow) that captures the beauty and magic of the book.
I’ve created a video for you (below) where I talk about all the details of the cover and the meaning behind each component. I hope you love it as much as I do.
~ Christina Farley, author of GILDED
A note from the cover designer:
Hello YABCers,
The GILDED cover evolved from an almost entirely symbolic approach to a combined symbolic/scenic approach. The final samjoko illustration (mythological 3-legged crow) you see here was created by Cliff Nielsen. This book has a couple of fun angles to inspire the cover design—a no-nonsense female protagonist, modern day Korea melded with the awesome visuals of traditional Korean mythology—the cover’s gold frame is meant to get the cultural part of the story across, and the stormy background scene and beautiful samjoko get the magic and fantasy of the book across. 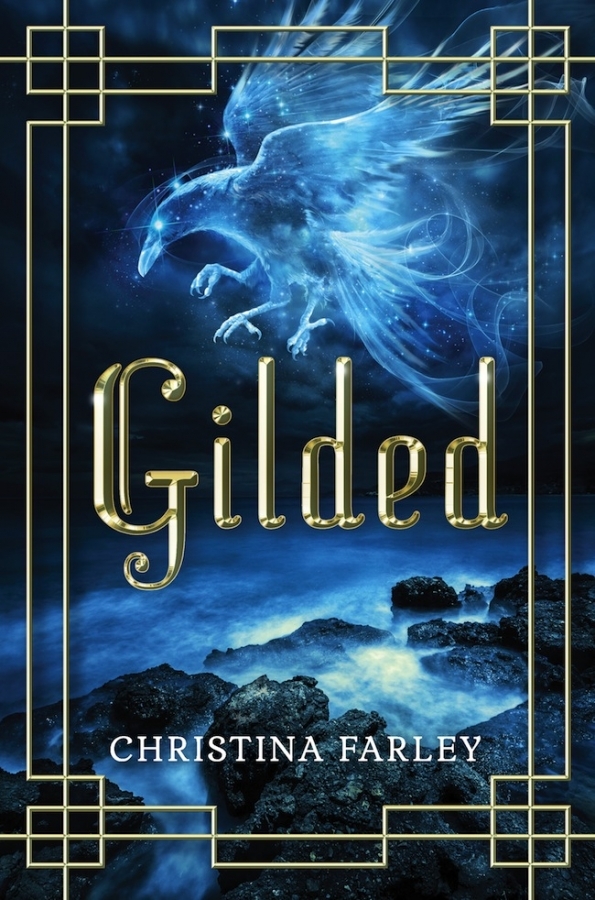 *** If you choose to share this image elsewhere, please include a courtesy link back to this page so others can enter Christina’s giveaway. Thank you! ***

A girl with a black belt and a deadly proclivity with steel-tipped arrows discovers an ancient Korean god has been kidnapping the first-born daughters of her family for generations. And she’s next.

Sixteen-year-old Jae Hwa Lee is a Korean-American girl with a black belt, a deadly proclivity with steel-tipped arrows, and a chip on her shoulder the size of Korea itself. When her widowed dad uproots her to Seoul from her home in L.A., Jae thinks her biggest challenges will be fitting in to a new school and dealing with her dismissive Korean grandfather. Then she discovers that a Korean demi-god has been stealing the soul of the oldest daughter of each generation in her family for centuries. And she’s next.

But that’s not Jae’s only problem.

There’s also Marc. Irresistible and charming, Marc threatens to break the barriers around Jae’s heart. As the two grow closer, Jae must decide if she can trust him. But Marc has a secret of his own — one that could help Jae overturn the curse on her family for good. It turns out that Jae’s been wrong about a lot of things: her grandfather is her greatest ally, even the tough girl can fall in love, and Korea might just be the home she’s always been looking for.

“This richly detailed novel kept me turning the pages well into the night. Jae Hwa starts off as a strong character and ends as a noble one, using both her brains and her brawn to win the day.”

“Farley brings South Korea’s fascinating culture and mythology into vivid detail in this shining debut, and Jae is a compelling heroine. An exotic, thrilling read, Gilded had me utterly entranced!”

The rocky shore, the stormy skies, the samjoko (!!!) — this cover is to DIE FOR. Wow. Utterly striking. I can’t stop staring!

CHRISTINA FARLEY, author of Gilded was born and raised in upstate New York. As a child, she loved to explore, which later inspired her to jump on a plane and travel the world. She taught at international schools in Asia for ten years, eight of which were in the mysterious and beautiful city of Seoul, Korea that became the setting of Gilded. Currently she lives in Clermont, FL with her husband and two sons—that is until the travel itch whisks her off to a new unknown. Gilded is her first novel.