I'm a huge fan of The Embrace Series and was really excited to have the opportunity to interview Jessica Shirvington! Here are her answers. Make sure to check out the EMBLAZE giveaway at the bottom of the post!

1.  I love the scenes where you show how Violet struggles with her feelings for both Lincoln and Phoenix.  Which character was your favorite to write?  Lincoln or Phoenix?

Oh, I love them both equally. I mean, there are different stages of EMBLAZE where they both shine. I loved writing the scene, and Lincoln's reactions to, when he and Violet go to the Lighthouse in Santorini. I also loved having the opportunity to write a chapter from Phoenix's point of view in EMBLAZE. I really thought it was time that readers saw a little more behind the facade.

2.  Interesting twist on Violet's dad.  Why did you decide to have him suddenly interested in what was going on with Violet?

It was always the plan. But everything is about timing. Violet' isn't the only one growing and developing in these books. Her father loves her dearly. He has her entire life, but he has struggled within himself to find any peace after losing the love of his life Evelyn. His actions have come from a place of survival and were never intended to hurt Violet. Now, as he sees her growing up and can tell that something has changed, well, he has to change too. Make his own choices about the kind of father he is going to be. 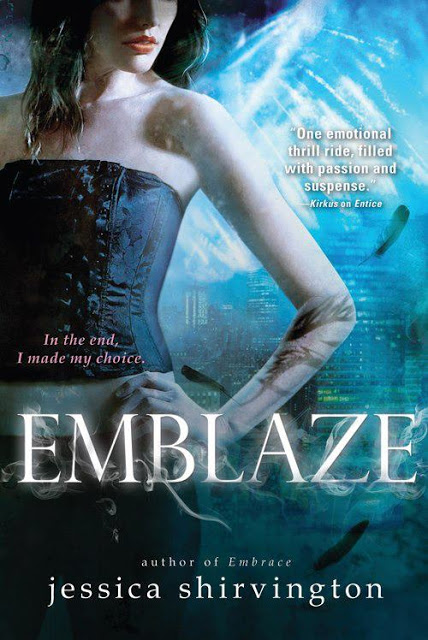 3. Did you plot out all 3 books at same time?  Were you suprised at where the story took you?  Especially the last couple of revelations that I won't give away?

I have always known what the key plot points would be (including the major revelations). There is no way I could've developed the characters in the same way in the earlier books if I hadn't. That said, the actual scenes and interactions are always new and I try to tackle each book as it comes, so I am often surprised.

4. I'm curious why Santorini ended up being the scene for the final confrontation. Is there a Biblical or mythological connection there?

Some people believe that the Island of Santorini was once the lost city of Atlantis. I thought that was pretty cool.

Once I had decided upon the concept of a volcano as a good earthly option for the Gates to Hell, I researched all the major volcanic eruptions in history. Originally I wanted to use Krakatoa – since it has been one of the most devastating eruptions in recent history and even now, the sunken volcano continues to rise out of the waters once again and has been renamed Anak Krackatoa – "The Child".

But I couldn’t deny all the evidence that suggested there was a better choice. An eruption that dated back to somewhere near 1600BC and was so powerful it changed the world map. One that - when I pieced together the timeline of Moses journey had some eerily fascinating parallels to the reported Plagues of Egypt and Days of Darkness, not to mention the speculation that this was responsible for the destruction of not only the Lost City of Atlantis but also for the eradication of the most advanced society known to man at the time – The Minoans. IF there was the possibility that a volcano could indeed hold the gates to hell – then the great and still active Volcano of THERA, what is now known as Santorini in Greece, was a fabulous option (in my opinion!).

I also preferred the idea of a research trip in the Greek islands than in Indonesia, but alas – my hopes were dashed when my husband told me to go out and buy a travel book instead. ;-)

5. Can you tell us more backstory on Josephine?

You will see more of Josephine in ENDLESS, book 4. She is an interesting character and not an easy one to deal with. I think of her as one of those people who can be very stuck in their ways - to many people's detriment. I'm enjoying developing her as the books continue so I won't go into further detail right now.

6. Which scene was the hardest to write?  Why?

Definitely the chapter in Phoenix's point of view. I was hesitant to change pov - it isn't something I have wanted to do before and I've always prioritised staying in Violet's mind space. But in the end I was really happy with it.

7. Do you have a playlist for EMBLAZE?  If not, what songs reflect key scenes?

Hardest of Hearts - Florence and the Machine. (For Violet and Lincoln)

All the Same to me - Anya Marina. (For Phoenix)

8. What's next in this series?  Do tell me there is a follow-up book!

Sure is. ENDLESS will be out in October this year in the US (yay!!). I also have my first stand alone coming out in Australia in May (US release dates coming soon!), which I am really excited about. And I am currently working on the fifth and final book in the EMBRACE SERIES.

You can find out more about Jessica Shirvington at http://www.jessicashirvington.com

You can purchase Emblaze at Barnes & Noble, Amazon, and Indie Bound.

Click here to enter our EMBLAZE giveaway for your chance to win a copy!

Everything I Never Told You: Author Interview and Giveaway

Awesome interview. I loved hearing how much Jessica had plotted out of the series when she wrote her first book. I read about her road to publication and it's pretty amazing. So excited for her new book.

0
Awesome interview. I loved hearing how much Jessica had plotted out of the series when she wrote her first book. I read about her road to publication and it's pretty amazing. So excited for her new book.
Cancel Update Comment