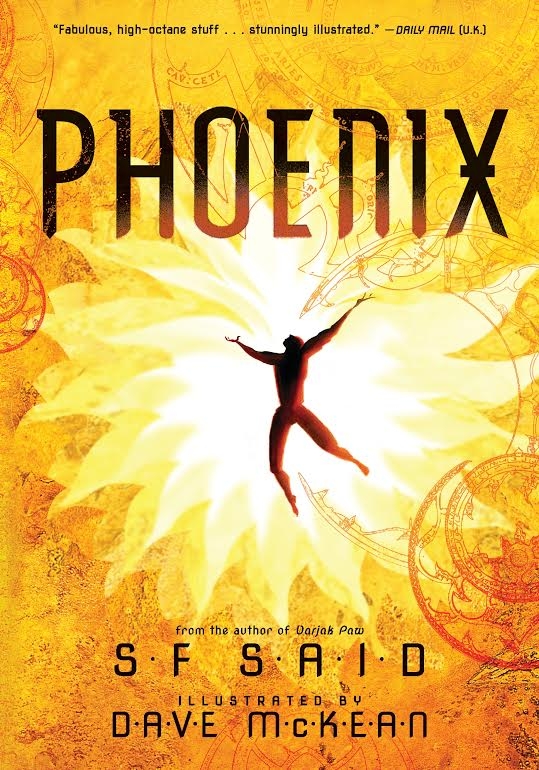 author of Phoenix!  Below you’ll find more about SF,

I want to start by sharing the best writing advice I’ve ever read.  It comes from JD Salinger’s Seymour: An Introduction:

“If only you’d remember before you sit down to write that you’ve been a reader long before you were ever a writer.  You simply fix that fact in your mind, then sit very still and ask yourself, as a reader, what piece of writing in all the world would you most want to read if you had your heart’s choice?  The next step is terrible, but so simple I can hardly believe it as I write it.  You just sit down shamelessly and write the thing yourself.”

I think that’s the truth about writing.  A writer is nothing more than a reader who took the next step, and decided to write the stories they wanted to read themselves.

That’s certainly how I wrote Phoenix.  One of its biggest inspirations is Star Wars, which I saw as a wide-eyed 10 year old when it was released in 1977.  I’ve wanted to write a great big space epic for young readers ever since.  And so Phoenix is a story about a human boy with the power of a star, and an alien girl who wants to save the galaxy from the war that’s destroying it.  If you share my love of Star Wars, I hope you’ll read Phoenix, because it was written for someone just like you.

Ancient mythology is another big inspiration.  I’m fascinated by the parallels between world mythologies, and I wanted to read a story that connected them all and imagined what might lie behind them.  So Roger Lancelyn Green’s retellings of ancient myths are deep in Phoenix’s DNA, as are books that create their own mythology, like Ursula Le Guin’s Earthsea stories.

Le Guin is a vital touchstone for me.  I love the way she uses science fiction and fantasy to communicate big ideas about the real world.  Her books have things to say about philosophy, spirituality, politics; about the interconnectedness of all existence; about the values and ideals that might help us live in dark times.  I wanted Phoenix to do all those things, as well as to entertain readers with spectacular action.

I love comics as much as books and films.  Phoenix could be seen as a superhero story about young people discovering how powerful they can be.  It also shares something with the cosmic end of Marvel, like The Silver Surfer, and Neil Gaiman’s The Sandman.  I’m very lucky that my books are illustrated by Dave McKean, who did The Sandman coversand is my all-time favourite artist.  It’s an awe-inspiring thing to work with someone whose own work influenced you!

You can’t choose your influences.  You love what you love.  But the things you love are the wellsprings of your writing, and the truer you are to them, the stronger your work will be.  I can see all these influences when I look at Phoenix.  As Salinger would say, it’s the piece of writing I most want to read in all the world, and I hope readers around the world will enjoy it too. A boy with unprecedented power must turn to the terrifying Alien enemies of humanity to discover his true nature and bring peace to a galaxy at war.

Lucky lives a relatively normal life on a remote moon of the planet Aries One, safe from the turmoil and devastation of the interstellar war between Humans and Aliens. Lucky has seen images of the horned, cloven-hooved Aliens before, but he’s never seen one up close. Then one night, he dreams that the stars are singing to him—and wakes to evidence suggesting that he is not so normal after all. When Lucky’s mother sacrifices herself to help him escape an elite Human military force called the Shadow Guards, he must rely on the Alien crew of a ramshackle starship, where he finds that humanity’s deadly enemies seem surprisingly Human up close. In fact, they may be more Human than Lucky himself, who has a dangerous power that could change the course of the war and the fate of the galaxy—if he can learn how to use it. Star Wars fans seeking another saga to love need look no further than this epic middle-grade adventure from SF Said, illustrated by Dave McKean with remarkable white-on-black spacescapes.