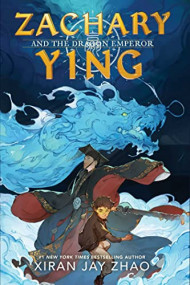 Today we are chatting with Xiran Jay Zhao, author of Zachary Ying and the Dragon Emperor

Read on for more about them, their book, and a giveaway! 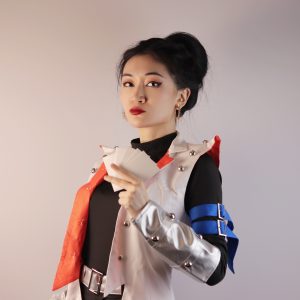 Xiran Jay Zhao (they/them) is the #1 New York Times bestselling author of the Iron Widow series. A first-gen Hui Chinese immigrant from small-town China to Vancouver, Canada, they were raised by the internet and made the inexplicable decision to leave their biochem degree in the dust to write books and make educational content instead. You can find them @XiranJayZhao on Twitter for memes, Instagram for cosplays and fancy outfits, TikTok for fun short videos, and YouTube for long videos about Chinese history and culture. Zachary Ying and the Dragon Emperor is their first middle grade novel.

About The Book: Zachary Ying and the Dragon Emperor

Zachary Ying never had many opportunities to learn about his Chinese heritage. His single mom was busy enough making sure they got by, and his schools never taught anything except Western history and myths. So Zack is woefully unprepared when he discovers he was born to host the spirit of the First Emperor of China for a vital mission: sealing the leaking portal to the Chinese underworld before the upcoming Ghost Month blows it wide open.

The mission takes an immediate wrong turn when the First Emperor botches his attempt to possess Zack’s body and binds to Zack’s AR gaming headset instead, leading to a battle where Zack’s mom’s soul gets taken by demons. Now, with one of history’s most infamous tyrants yapping in his headset, Zack must journey across China to heist magical artifacts and defeat figures from history and myth, all while learning to wield the emperor’s incredible water dragon powers.

And if Zack can’t finish the mission in time, the spirits of the underworld will flood into the mortal realm, and he could lose his mom forever.

My friend Rebecca Schaeffer, author of the Not Even Bones series, first gave me the encouragement to dip my toes into middle grade when I was going through a period of intense hyperfixation on Chinese history and myth and wouldn’t stop talking to her about it. My YA books weren’t catching the attention of agents back then, so she suggested I try a different genre. Mythology is super popular in MG, after all, and surely I could spin all those legends in my head into a fun adventure. Immediately I thought of doing a Chinese take on Yugioh, the most formative anime of my childhood, where I’d combine modern gaming tech with ancient myths and magic. The idea of Zachary Ying then budded in my head, and I wrote it as soon as I could.

Qin Shihuang, the First Emperor of China, was the most fun to write—though not necessarily a likable person at all! He has such a comically skewed moral compass that it constantly leaves you looking into the camera like you’re on the office. I like to compare his and Zack’s relationship to Rick and Morty.

The novel! The title is pretty standard MG format, but it was changed from its original of Zachary Ying and the First Emperor of China when my publisher acquired it. The old one was indeed a mouthful!

There’s a moment where Zack realizes interpreting the myths and legends he comes across from a fresh perspective is not necessarily a bad thing—he figures out how to get his squad out of a conundrum by thinking of a mythical figure in a way they wouldn’t. I’m really proud of this moment because I was stuck at this segment during writing, but then I thought of what Zack’s character arc needed, and that led me to figure out how the scene should proceed.

Know the ending and overall character arc your protagonist needs to go through before writing a story. This way, your writing will always have momentum, because there’s a distinct direction it’s heading toward.

EVERYTHING. It was done by the incomparable Velinxi, based on a design by Karyn Lee, and I cannot stop staring at it every time I see it. They managed to incorporate everything I envisioned, from Zack and Qin Shihuang’s action poses to their clothes to the water dragon behind them to the underwater city on the back, then took it even further with the sci-fi vibes of the lettering combined with Zack’s family name in Seal Script (historically accurate to what was used in the First Emperor’s time!) You should’ve heard me scream when the cover first landed in my inbox in its full glory. It is absolute perfection.

What new release book are you looking most forward to in 2022?

Foul Lady Fortune by Chloe Gong! It has such Republic of China era C-drama spy thriller vibes and I cannot wait for the chance to dig into my ARC.

Nura and the Immortal Palace by M.T. Khan! It’s a middle grade debut coming out July 5 this year that captivated me from the first page with its lyrical writing and then transported me from rural Pakistan to a fantasy realm of jinn and magic.

I’m working hard on the sequel to my YA debut Iron Widow, which will hopefully release Spring 2023!

For sure Zack watching his dad’s last message to him. It was tricky to capture a level of emotion that intense.

Melissa in Zachary Ying took a few revisions to get right. Her and Simon were overshadowed by the emperors they hosted in the first few drafts, so I ended up cutting down on the times they were possessed.

Don’t squeeze yourself into a box you don’t fit in for the acceptance of other people – live your own legend!

Going viral on social media, probably. Lots of people ask me for tips on how to do it, but honestly, I think you’re either naturally in tune with the vibe of social media or you’re not. It’s not something that can be taught.

Currently, it’s hard to think about anything except Putin’s invasion of Ukraine. You can donate to Nova Ukraine https://novaukraine.org/ or Global Giving’s Ukraine Crisis Relief Fund https://www.globalgiving.org/projects/ukraine-crisis-relief-fund/ to help Ukrainian refugees.

This is going to sound unconventional, but don’t form too much of an emotional attachment to your projects. Be practical. This will allow you to take critique a lot easier and to let go if it’s clear that publishing doesn’t see it as viable. The worst thing you could do as a baby writer is to wrap yourself around a single project for years and years and years. Move on! I guarantee that your next project will be better, because the very foundations of it will be born from a more sophisticated instinct for storybuilding. Publishing is too fickle to depend on those “you just need one person to like it!” exceptions when you’ve already run a book through most agents or editors. It’s sad to give up on your babies, but you’ll feel better when your next projects take you to far higher places than you imagined. Trust me.

If you want to learn more Chinese history and myth in a non-fiction format, check out my videos on YouTube!

5 thoughts on “Author Chat With Xiran Jay Zhao (Zachary Ying and the Dragon Emperor), Plus Giveaway! ~ US ONLY”

You are here: Author Chat With Xiran Jay Zhao (Zachary Ying and the Dragon Emperor), Plus Giveaway! ~ US ONLY