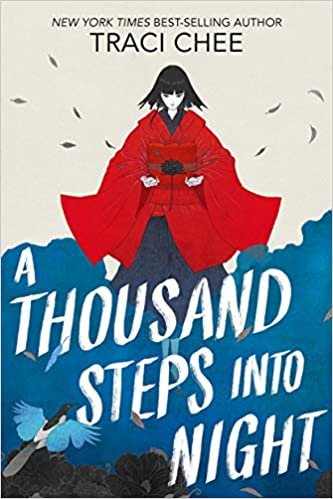 Today we are chatting with Traci Chee, author of

A Thousand Steps Into Night!

Read on for more about Traci and her book!

Traci Chee is the NEW YORK TIMES best-selling author of YA fantasy THE READER. An all-around word geek, she loves book arts and art books, poetry and paper crafts, though she also dabbles at piano playing, egg painting, and hosting potluck game nights for family and friends. She studied literature and creative writing at UC Santa Cruz and earned a master of arts degree from San Francisco State University. Traci grew up in a small town with more cows than people, and now feels most at home in the mountains, scaling switchbacks and happening upon hidden highland lakes.

Meet A Thousand Steps Into Night!

In the realm of Awara, where gods, monsters, and humans exist side by side, Miuko is an ordinary girl resigned to a safe, if uneventful, existence as an innkeeper’s daughter. But when Miuko is cursed and begins to transform into a demon with a deadly touch, she embarks on a quest to reverse the curse and return to her normal life. Aided by a thieving magpie spirit and continuously thwarted by a demon prince, Miuko must outfox tricksters, escape demon hunters, and negotiate with feral gods if she wants to make it home again. But with her transformation comes power and freedom she never even dreamed of, and she’ll have to decide if saving her soul is worth trying to cram herself back into an ordinary life that no longer fits her… and perhaps never did.

A Thousand Steps into Night is the story of Otori Miuko, an ordinary girl of the serving class, who’s never quite fit in to the meek, subservient role society has allotted to her. She’s minding her own business one day when out of the blue, she’s set upon by a demon called a shaoha, who curses her to turn into a shaoha herself. Having little desire to become a demon, Miuko sets off on a journey to remove her curse and reverse her transformation, but on the way she discovers that there’s freedom in being a monster, and she has to decide whether that freedom is worth losing her ordinary human soul.

Like most of my books, this story is an amalgam of different inspirations. On the one hand, it’s partly inspired by Japanese folklore and the children’s stories I read when I was a kid. Unlike western fairy tales, most of those stories didn’t have princes or princesses, but they featured all sorts of strange and wonderful creatures, like dancing tea kettles and tongue-cut sparrows, who visited humble protagonists like old peasants and woodcutters, which is something I wanted for A Thousand Steps—a humbler world, and a weirder one, where the realms of the mortal and the spirit are intimately connected, and where even the most ordinary girl can stumble upon great adventures.

At the same time, I wanted to fuse to this Japanese-influenced backdrop a response to the western patriarchal systems in which I grew up. Even before she’s cursed by a demon, Miuko struggles with the confines of her role as a girl of the serving class, which dictates that she look, think, and act a certain way in order to be considered acceptable or valuable. Then, when she embarks on her journey, her world opens—she discovers that the categories, hierarchies, and traditions that have hemmed her in for so long are both deep-rooted and widespread, manifesting in all sorts of heinous ways. Moreover, she discovers what happens when someone steps outside of those categories, hierarchies, and traditions—they become a threat to these unjust institutions, both more powerful and more free.

I love everything about this cover! It’s a brilliant collaboration between designer Celeste Knudsen and illustrator Kotaro Chiba, and I can’t say enough good things about it. There’s such power in Miuko’s pose here: the way her hair spreads out, almost as if by magic, and the way the petals fly from the dying flower between her hands. Of course, I also love that vivid blue tide sweeping up her legs—I think it’s such a lovely representation of the curse both transforming her and buoying her at the same time as she discovers how powerful she really is. The back cover is just as stunning, so I can’t wait for everyone to see it when the book launches in March!

I love my main character, Miuko, who’s never quite fit into the submissive role society has assigned to her, but I have to admit that I absolutely adored writing her best friend/traveling companion Geiki. A magpie spirit with a penchant for thievery, Geiki possesses powers of illusion and shapeshifting that he uses to get them into trouble as often as he gets them out of it. Being a bird, he doesn’t quite understand human customs, so he’s constantly questioning the sexist ideas and traditions that Miuko’s had to put up with her entire life, which, for a girl like Miuko, is quite the breath of fresh air! Ultimately, Geiki is clever, funny, and supremely loyal, and you couldn’t ask for a better bird to accompany you on a journey across the realm to remove a curse that’s transforming you into a demon.

The Ivory Key by Akshaya Raman. This Indian-inspired YA fantasy is about four estranged siblings who must come together to find a lost relic and save their kingdom from ruin, and it has so much to love: archaeological adventures! puzzles! lost cities! lush descriptions! a vividly drawn world! But it’s the characters’ complex sibling relationships that really make this debut stand out—their interactions with one another are so complicated, so shaded by the hurts of their childhood and the obligations of their rank, but they’re family, and the way they learn to love each other again is just so beautiful.

I’m looking forward to reading so many 2022 releases, and one of them is A Scatter of Light by Malinda Lo. Malinda won the National Book Award for Young People’s Literature last year for her 1950s historical Last Night at the Telegraph Club, and I’ve heard her mention that A Scatter of Light, a contemporary novel set after the first of the Supreme Court decisions that brought marriage equality to the United States, features a loose tie-in with Lily and Kath from Last Night! I’m so looking forward to revisiting those characters when I dive back into her work this fall.

A Thousand Steps Into Night

You are here: Author Chat with Traci Chee (A Thousand Steps Into Night)!