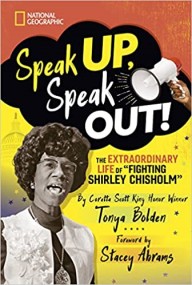 Today we are chatting with Tonya Bolden, author of

Speak Up, Speak Out!

Read on for more about Tonya, her book and giveaway!

Meet Speak Up, Speak Out!

Before there was Barack Obama, before there was Kamala Harris, there was Fighting Shirley Chisholm. A daughter of Barbadian immigrants, Chisholm developed her political chops in Brooklyn in the 1950s and went on to become the first Black woman elected to the U.S. House of Representatives and the first Black woman from a major political party to run for president. This “pepper pot,” as she was known, was not afraid to speak up for what she thought was right.

While fighting for a better life for her constituents in New York’s 12th Congressional District, Chisholm routinely fought against sexism and racism in her own life and defied the norms of the time.  Shirley Chisholm laid the groundwork for a host of women and people of color who later entered politics.

Extensively researched and reviewed by experts, this inspiring biography traces Chisholm’s journey from her childhood in a small flat in Brooklyn where she read books with her sisters, to Brooklyn College where she got her first taste of politics. Readers will cheer Chisholm on to victory from the campaign trail to the hallowed halls of the U.S. Capitol, where she fought for fair wages, equal rights, and an end to the Vietnam War. And while the presidential campaign trail in 1972 did not end in victory, Shirley Chisholm shows us how you can make change happen when you speak up and speak out.

YABC Interview with Tonya Bolden about Speak Up, Speak Out! (Feb. 2022)

YABC:  What gave you the inspiration to write Speak Up, Speak Out!?

Actually, it wasn’t my idea. My agent, Jennifer Lyons, suggested it to me. After a skinny minute, I thought, Of course! Shirley was a native New Yorker. I’m a native New Yorker and when I was a tot my family lived for a time in Bed-Stuy, Brooklyn, where Shirley lived for much of her life.

As a kid and as a teen I didn’t know a lot about Shirley but I was definitely aware of her presence in politics, very aware of her rapid-fire speech and her feistiness. Her run to be the Democratic Party’s presidential nominee was a real Wow! moment for me. I was in secondary school at the time. For a Black girl to see a Black woman be so daring was truly inspiring. It filled me with much pride. After my agent pitched the idea and all of this flashed through my mind I was definitely all in.

YABC: While doing research for Speak Up, Speak Out! you must have read about many individuals who were directly or indirectly a part of Shirley Chisholm’s story.  Was there one individual in particular that sparked your curiosity as someone that you’d like to go back and delve into further?

In researching Shirley’s life I came across several Black women I’d never heard of, women who paved the way for Shirley. I just may delve into the life of Maude Richardson, a Brooklynite who twice ran unsuccessfully for a seat in the New York State Assembly. This was in the 1940s. Like Shirley, Richardson had guts. She was a tireless community activist. Definitely an unsung hero.

YABC: What chapter in the book are you most proud of, and why?

I don’t think that there’s one chapter that I am most proud of. But I will say that the passages most dear to me are those that cover Shirley’s life in the 1960s and 1970s. Those were my growing-up years. I was reliving my youth as I wrote about the Civil Rights Movement, the Black Power movement, second-wave feminism, protests against US involvement in the Vietnam War, the War on Poverty, the assassinations of JFK, Dr. King, and Bobby Kennedy, along with the riots, and Watergate. I reflected a lot on the impact the times had on me.

YABC:  Thinking back to the beginning of your career as an author, what’s the most important thing you’ve learned as a writer from then to now?

One of the most important things I’ve learned is that it’s good to diversify. When I started out I took whatever work I could find. I didn’t enter the business saying, “Oh, I only want to write nonfiction,” or “Oh, I only want to write fiction.” I was open to everything. So I’ve written nonfiction and fiction. I’ve done picture books. I’ve edited anthologies and I’ve done YA adaptations. Working on different kinds of books, working different types of skills, is fun and invigorating.

YABC:  Speak Up, Speak Out! spans the entirety of Shirley’s life — and beyond. Which part of Shirley’s story did you find the most difficult or emotional to research and write?

I teared up a bit when I worked on Shirley’s downtime in Albany when the New York State Legislature was in session. She headed to Albany Sunday night or early Monday morning and returned to Brooklyn on Thursday or Friday. There were 208 members of the New York State Legislature when she entered it in January 1965, 150 in the Assembly and 58 in the Senate. Shirley was the only woman among the six Black members of the Assembly and the only Black person among the four women in the Assembly. There was only one Black person in the Senate, Constance Baker Motley, but she resigned in early 1965 when tapped to fill a vacancy for Manhattan Borough president.

Shirley never mentioned socializing with the three white women in the Assembly. She said that some of her male colleagues sometimes invited her to join them in a little nightlife, but she didn’t take them up on the offer. She spent her evenings in her room at the DeWitt Clinton Hotel. Watching TV. Reading. Thinking, Working on legislation. I’m sure there must have been telephone calls with her husband, Conrad, but I imagine that at times she must have felt quite lonely.

I also became emotional when working on the Epilogue, telling readers that after Shirley died, with the passage of time, a lot of people forgot about her—or never even learned about her. Then I segue to 2019, the fiftieth anniversary of her becoming the first “black woman congressman” as she liked to be called. She got a lot of love that year—tributes galore, including a statute in Brooklyn’s Prospect Park and the opening of the Shirley Chisholm State Park in Brooklyn. I so love the New York Times headline to a July 6, 2019, piece: “2019 Belongs to Shirley Chisholm.”

YABC:  What is the main message or lesson you would like your reader to remember from  Speak Up, Speak Out! ?

I hope that readers will keep in mind that so much is possible. Shirley came from humble beginnings and through hard work and determination—and in the face of racism and sexism—she achieved so much. And she was truly of service to the nation fighting for affordable child care, health care, and housing; fighting for better K-12 public schools, the ERA, the environment, and so much more. So I hope that readers will think deeply about different ways that they can make positive contributions to society—how they can wage the good fight. May they remember the following words of Shirley Chisholm: “You don’t make progress by standing on the sidelines, whimpering and complaining. You make progress by implementing ideas.”

My gratitude to YABC for this opportunity.

Speak Up, Speak Out!

One winner will receive a copy of Speak Up, Speak Out! The Extraordinary Life of “Fighting Shirley Chisholm” (Tonya Bolden) ~ (US Only)

3 thoughts on “Author Chat with Tonya Bolden (Speak Up, Speak Out! The Extraordinary Life of “Fighting Shirley Chisholm”), Plus Giveaway! ~ (US Only)”

You are here: Author Chat with Tonya Bolden (Speak Up, Speak Out! The Extraordinary Life of “Fighting Shirley Chisholm”), Plus Giveaway! ~ (US Only)