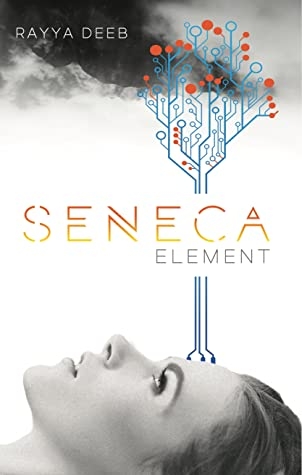 Today we are chatting with Rayya Deeb, author of

Read on for more about Rayya and her book!

Rayya Deeb cut her teeth in television production and film development, working for the likes of HBO, Comedy Central, PBS & Fred Roos Productions. In 2016 Rayya’s debut fiction novel, Seneca Rebel, was published. Seneca Element, the second book in The Seneca Society series, was released in 2019, and the third is now in the works. She collaborated with Emmy-winning experience designers to create a dynamic, expanded-fiction world as a companion piece for the series. Rayya currently has several scripted television and film projects in development.

If you knew that creating singularity between your mind and machine would open Pandora’s Box would you do it?

Not even teen math-genius, Doro Campbell, could have known what she was getting herself into when she made the choice to get an implant connecting her brain to her computer. But when she finds her own existence at the center of a fight for power that runs deep inside the near-future, secret society that is Seneca, Doro realizes her mind may no longer be under her own jurisdiction.

In this breakneck race to find her dad and save the planet, Doro must choose between trusting her inner self or technology. Amidst the perils of a brutal technological warfare, and navigating the ups and downs of her first love, can Doro find the way to save herself… and the fate of the world?

YABC :What gave you the inspiration to write this book?

The inspiration for this book has been quite an evolution from the first. While they are a part of the same process, what first started as a curiosity for Ray Kurzweil’s futurist predictions of singularity, has developed into a deep-rooted passion for exploring the heart of who we are and the choices we make in this evolving, high-tech, hectic and uncertain world. My inspiration comes from many places and hopefully it will all shine through in this story and inspire others.

I do enjoy writing all of the characters and playing with the relationships between them, but my favorite is Doro. She’s a rebel with a sense of curiosity and a huge heart, but of course she’s got flaws and internal struggles, too, like we all do. I think that is a huge part of the heroine’s journey, and one that I am compelled to examine.

5.       Thinking way back to the beginning, what’s the most important thing you’ve learned as a writer from then to now?

6.       What do you like most about the cover of the book? Chris Thompson at Lucky Ember Design has been involved with Seneca since the beginning. His understanding of this near-future world, the characters and story is perfectly echoed in the cover of Seneca Element. On top of that, there is some pretty unique stuff going on with the cover design that I can’t say I have ever seen happen before… it requires deciphering.

I devoured The Light Between Us by Laura Lynne Jackson. It was so fascinating. I’ve also been making my way through A Brief History of Everything by Ken Wilber. It’s so dense and everytime I pick it up I feel my mind stretching in so many directions. I like to keep a mix of books to fly through and those that take months to absorb.

I have a few scripted projects in the works and I am writing book three in the Seneca Society Series. Seneca Element was quite challenging as I found my own spiritual journey paralleling the heart of the story and I did a lot of personal growth work, but with this third one I am in a whole new place. I am very excited about where the story of Seneca is going. It’s a lot of fun and always incredible to explore what life will be like in the future.

You are here: Author Chat with Rayya Deeb (Seneca Element)!