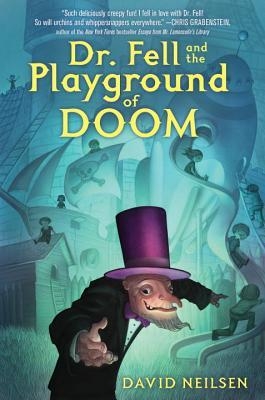 author of Dr. Fell and the Playground of Doom!

Below you’ll find our interview,

more about david, and his book, plus a giveaway!

The idea for the book came from an illustration that had been hanging on the wall of my in-laws’ for years. Drawn by the late children’s illustrator Trina Schart Hyman, it shows a man in a suit and top hat leering down at a little girl, who looks back at him suspiciously. The man has a large basket strapped to his back out of which are sticking various arms, legs, and heads of little children. It’s labelled “Dr. Fell” and Hyman drew it when asked to create an image from her favorite fable or fairy tale. I looked up Dr. Fell online and discovered the four-line poem written in 1680 and I’ve included at the beginning of my book.

Right away all sorts of questions jumped into my head. Who is this guy? What is he doing? What happens when he comes to town? Answers to those questions started to form the story in my head.

In a way, they each came first and sort of leap-frogged over one another. The story came out of the illustration which was called “Dr. Fell.” And from the very beginning, the book title was “Dr. Fell”  in my heads and nothing else.

Then Random House got the book, and decided that “Dr. Fell” needed some spicing up. My editor came back to me with, “We want to call it Dr. Fell and the Playground of Doom. What do you think?”  So looking at it from that angle, the story came first.

Not to give anything away, but there’s a scene near the end of which I am especially proud. Characters are in a dark, spooky place and they spot something in the dark. It is an afterthought and not central to the plot, but I had a very specific idea in my head as to what it was they saw. The thing is, unlike the rest of the book, this idea in my head wasn’t visual. It was more conceptual. I spent a long time trying to write the passage in a way that would creep the reader out, but everything I wrote just came out sounding silly. Finally, I chose to not even bother trying to describe it. I just state what it is and let the reader’s own imagination fill in how that would look.

Different people are going to see different things in their head, because no one can really scare us better than ourselves. My editor noted the section and suggested I change it, but I convinced her to allow me to keep it the way it was. Then the next level of editing also pointed it out, and my editor went to bat for me and again the passage was allowed to remain. It’s in the final book, and I couldn’t be happier.

When I first saw Illustrator Will Terry’s black-and-white sketch of what would be the cover, I was thrilled. This was the first time I’d had a third party interpret my work in this way, and I’d been nervous that the end result just wouldn’t fit with my vision. But Mr. Terry hit the nail on the head. I saw right away in his sketch that he’d taken the time to really read my book. There are elements on the cover that are straight off the pages, details he didn’t need to include, but did. I really feel that the cover beautifully captures the essence of the book.

It would have to be Jonathan Stroud’s The Creeping Shadow. It’s the fourth book in his Lockwood & Co. series which is a series I absolutely love. The series follow teenaged ghost hunters in a future London that has been overrun by ghosts. Only kids can see them, so all the ghost hunters are kids. It’s a wonderfully-rich world filled with great characters and plenty of ghoulish scares and creepy vibes.

My follow up to Dr. Fell is set to come out a year later in August, 2017. Tentatively titled “Doors,” it has no connection to Dr. Fell, but is an equally dark tale that explores a world I’m very excited to share with readers.

I had a lot of trouble at first getting Nancy straightened out. I knew I wanted her to be more daring and active rather than reactive, but she was a little too mean in my initial pass. She’s one of the three main characters, and it was important for me to make her likable. I went back and softened her up, but then she’d lost her bite. It took a few tries at a couple of different scenes until I found the right balance.

I would have to say drafting. For me, writing that first draft is a lot like reading the book for the first time. I get excited to see where the story goes. I have a general idea, of course, and am heading for specific points, but I love it when things pop up unexpectedly. For example, there’s a character in Dr. Fell that wasn’t initially intended to be part of the story. Suddenly they had to be there and I was shocked but thrilled.

Meet Dr. Fell and the Playground of Doom!! When the mysterious Dr. Fell moves into the abandoned house that had once been the neighborhood kids’ hangout, he immediately builds a playground to win them over. But as the ever-changing play space becomes bigger and more elaborate, the children and their parents fall deeper under the doctor’s spell.

Only Jerry, Nancy, and Gail are immune to the lure of his extravagant wonderland. And they alone notice that when the injuries begin to pile up on the jungle gym, somehow Dr. Fell is able to heal each one with miraculous speed. Now the three children must find a way to uncover the doctor’s secret power without being captivated by his trickery.

David Neilsen is the author of Dr. Fell and the Playground of Doom, and several other odd, weird, supernatural, and occasionally slightly disturbing books and stories. David is also a professionally trained actor who works as a professional storyteller up and down the Hudson River Valley and in New York City. His one-man performances based on the work of H.P. Lovecraft have sent many screaming into the hills in search of their sanity.

Dr. Fell and the Playground of Doom

One winner will receive a copy of Dr. Fell and the Playground of Doom (US only).

4 thoughts on “Author Chat with David Neilsen (Dr. Fell and the Playground of Doom), Plus Giveaway!”

You are here: Author Chat with David Neilsen (Dr. Fell and the Playground of Doom), Plus Giveaway!