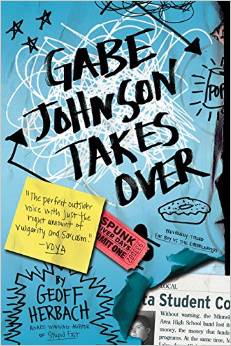 
From “one of the most real, honest, and still funny male voices to come around in a while” (YALSA) comes a brand-new cast of quirky characters.

Gabe Johnson is having a rough week. In spite of the popular kids and some teachers calling him names because of his weight, and even his own friends calling him “Chunk,” Gabe is normally the funny kid at school. But he’s on edge from trying to kick his soda addiction. So when news breaks that his beloved marching band camp has been canceled due to lack of funding, he’s furious. What makes him even madder? The school’s vending machine money, which had previously been collected by the band, is now sponsoring the new cheer squad.

The war is ON. And Gabe is the high school underdogs’ champion. No one will be safe from the Geeker’s odd brand of wrath—not the principal, the band teacher, the local newspaper, and certainly not the cheerleaders and their jock boyfriends.

GABE JOHNSON TAKES OVER is the story of Gabe’s fight against injustice, but also his fight to reclaim himself. For years he has played along while the popular kids bully him, but no more. With the help of friends and unexpected allies, Gable learns about power, politics, and himself. A funny, touching, and insightful story, GABE JOHNSON TAKES OVER will appeal to any kids who feel like they just don’t fit in.

Praise for Gabe Johnson Takes Over


“Told in the first-person voice that Geoff Herbach does so well, Gabe Johnson’s account of his development of the ‘leadership bone’ is grand, touching, and hilarious.” —Star Tribune

“[A] funny, honest, and an utterly likable narrator; his character growth and the decisions he makes are believable and his refusal to be a victim is refreshing. Give to anyone who has felt like an outsider or just wants a fun, fast-paced book with depth.” —School Library Journal

“The funny, profane text embraces the idea that nobody is perfect…Gabe’s character growth will satisfy any appetite…a funny popcorn read.” —Kirkus Reviews

“Herbach’s funny/insightful new novel…there’s poignancy in this story…Gabe stands up for the dignity of all the kids who feel like outsiders.” —Pioneer Press, Pick of the Week

“Herbach deftly walks the tightrope between stereotypes and real people painted in broad strokes, and manages to work in a few surprises…[he]delivers another funny, poignant novel about an unlikely hero determined to save his high school’s marching band.” —Shelf Awareness

Geoff Herbach’s books have been listed in the year’s best by YALSA, the American Booksellers Association, and many state library associations. They’ve won the Cybil and the Minnesota Book Award. Geoff grew up a very nerdy jock in southern Wisconsin and now teaches creative writing at Minnesota State University, Mankato.

2 winners will each receive a copy of Gabe Johnson Takes Over.

You are here: Giveaway: Gabe Johnson Takes Over by Geoff Herbach (US only)