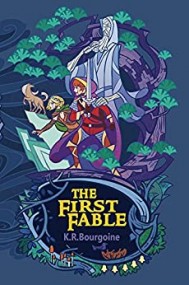 Macal knew three things: – His father was helping the enemy win the war – Nothing could stop the invasion – He was to scared to do anything about it Young and terrified, Macal is forced on an adventure that takes him across the kingdom. Assassins, spies, riddles, traps, mysteries, wizards, creatures from the dark, invading troll legions and more, stand in his way as he attempts to find his father and prove his innocence. And worst of all, he learns that in some wars there are no survivors.

What I liked:
The First Fable is a fun, fast-paced fantasy adventure that fans of the genre will enjoy. Told from the viewpoint of young, wide-eyed Macal, the book also teaches you about the world and its residents, factions, and magic as he learns about them. Their a great cast of quirky characters, one of which is a snarky cloak with an attitude. The story moves along as an epic adventure with a quest or two that must be achieved. Macal is a young man who suffers from guilt as the adventure plays out, making him doubt his place and worth.
Final Verdict:
A story both young people and adults can relate to will have more adventures. Macal is just a simple farm boy who must navigate a more threatening and magical world than he realized. It is a big wide world, and you never know who will be your friend or what.
Will Macal be able to prove his Farther is the honorable man he believes him to be? Will he save the world from the angry trolls invading Eloronia, and will he and the cloak ever stop being enemies? Find out when you pick up First Fable.