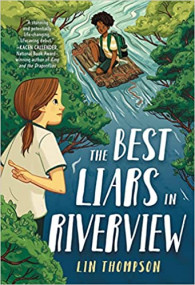 Today we are chatting with Lin Thompson, author of

The Best Liars In Riverview!

Read on for more about Lin, their book and giveaway! 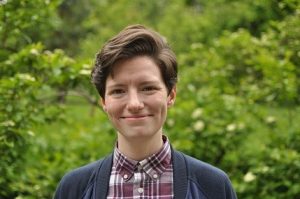 Lin Thompson (they/them) is a Lambda Literary Fellow of 2018. An earlier version of this novel was workshopped in Pitch Wars and it also received the Travis Parker Rushing Memorial Writing Award at Emerson College. Lin grew up in Kentucky but now lives in Iowa with their wife and cat. Visit them online at linthompson.com.

Meet The Best Liars In Riverview!

In the woods of a small Kentucky town, Aubrey sets off on a journey about growing up, self-discovery, and acceptance while searching for their missing best friend—perfect for fans of King and the Dragonflies and Three Times Lucky.

Aubrey and Joel are like two tomato vines that grew along the same crooked fence—weird, yet the same kind of weird. But lately, even their shared weirdness seems weird. Then Joel disappears. Vanishes. Poof. The whole town is looking for him, and Aubrey was the last person to see Joel. Aubrey can’t say much, but since lies of omission are still lies, here’s what they know for sure:

Aubrey doesn’t know where Joel is, but they might know how to find him. As Aubrey, their friend Mari, and sister Teagan search along the river, Aubrey has to fess up to who they really are, all the things they never said, and the word that bully Rudy Thomas used that set all this into motion.

I spent most of my teenage and young adult years writing about characters who wanted to run away from home and start over someplace new, where no one knew them—just like Aubrey and Joel want to do in THE BEST LIARS IN RIVERVIEW. I didn’t really put together until later, when I was figuring out my own queer identity, that my fascination with this idea of running away was very tied up in my own queer experience, and with me wanting to explore who I was when I was away from the expectations of the people who’d known me forever. I wrote a short story in college about two kids building a raft, and as I was exploring my queer identity and gender over the years after, that was the story I kept coming back to and using to work through some of these ideas.

Definitely the novel! I spent about seven years just calling this book “raft story”—I still catch myself calling it that sometimes—and all my documents for it were just labeled “dRaft” with a capital R (a pun I was very proud of, haha). My amazing agent Beth Phelan was the one who came up with THE BEST LIARS IN RIVERVIEW—she’d come up with a whole list of options and that was the one we settled on. Adding the title was one of the last things we did before she sent the book out to editors.

There’s a chapter midway through when Aubrey, who has been sort of questioning their gender in small pieces and small moments, starts putting those pieces together. They’re bringing up these memories of when they’ve heard about or learned about other trans and nonbinary people, and then Aubrey is finally letting themself acknowledge how they felt in those moments—the relief of realizing that they aren’t the only one who feels this disconnect from the gender people have assumed them to be. When I was getting stuck during revisions or feeling burned out, that was the scene I would go back to reread, because it helped me remember why I was writing this book.

I absolutely love the cover art by Celia Krampien, especially those lush, green woods in her illustrations! When my publisher first started talking about cover design, my editor sent me some preliminary questions to get my thoughts, and it turned out that my biggest sticking point was that, if there were woods on the cover, the woods really felt like the ones in central Kentucky. And then I was very extra and attached a bunch of photos I’d taken from around Mammoth Cave and kept emphasizing that it was very important that any illustrations showed mostly deciduous trees and not evergreen, haha. Celia’s art delivered 100%!

I’m so excited for MOONFLOWER by Kacen Callender, which is coming out in May! Kacen’s middle-grade books are gorgeous and emotional and so, so poignant, and I love the ways they blend magical and spiritual elements into stories that are so vivid and real.

I just turned in my second middle-grade book, which is about a trans kid and his siblings hunting for ghosts in their grandmother’s haunted house. Even where this book and BEST LIARS share some similarities, Simon was a really different main character to write than Aubrey, and it’s been a lot of fun to explore Simon’s world and journey from his perspective! It’s also very much a sibling book and very focused around Simon’s family and the changes that they’re going through.

There’s a scene that happens the night before Joel runs away on the raft, when Aubrey and Joel have a fight—we don’t get the full story of it until fairly late in the book, but it’s a pretty pivotal moment for both of them, as they’re both going through related but separate struggles and Aubrey isn’t able yet to fully hear or understand what Joel needs. It hurts my heart a little every time I reread it, but I think it’s important to show how these friends, who clearly care so much about each other, sometimes need different (and conflicting) things and don’t yet know how to communicate that with each other.

Don’t be afraid to experiment and figure out a writing process and routine that works for you! There’s no one strategy or writing method that will work for everyone—for me, the process has even varied wildly from book to book. In my opinion, the best writing approach is just the one that helps you get your specific book written. That might mean writing every day, or it might mean letting yourself mull over the story for a while before you write in a big burst, or it might just mean jotting down pieces when you can and sticking with it for the time that it takes—which is how I wrote most of BEST LIARS. Once you find the story that you just absolutely have to tell, it can make it easier to push through the ups and downs of the writing journey, too.

The Best Liars In Riverview

2 thoughts on “Author Chat with Lin Thompson (The Best Liars In Riverview), Plus Giveaway! ~ US Only”

You are here: Author Chat with Lin Thompson (The Best Liars In Riverview), Plus Giveaway! ~ US Only