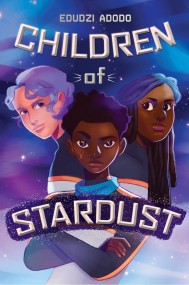 Zero has spent years scraping by as an aid to stranded travelers whose spacecrafts have crashed on his home planet, while all he has ever wanted is to join one of the legendary Saba guilds―groups of intergalactic travelers who explore space, retrieve lost treasures, and hunt down criminals.
One day, Zero stumbles upon some wreckage and meets a strange creature with an even stranger object: a golden pyramid. When the pyramid imbues Zero with a legendary power, he is recruited by a top Saba guild and launched into a dangerous intergalactic quest to track down the infamous Mask of the Shaman King before the Space Mafia uses it to unleash chaos on the galaxy.

Be true to yourself

What worked:
The author creates a world somewhere in the galaxy by blending familiar terms along with new vocabulary. Zero lives in the City of Children after all the adults disappear following the Great Flash. He’s a human teen who is used to interacting with creatures coming in different shapes, sizes, and colors. Whizzers are spaceships used for flying to different planets and asteroids, and Kobastickers allow owners to wield a variety of abilities. Zero finds himself unexpectedly connected to a very rare Zodiac Kobasticker. He uses his laptop-like Goober to look up information, to watch his favorite show, “Saba Now”, and to apply for membership into different Saba guilds. Characters play video games, and references are made to an ancient planet (Earth) that used VCR tapes as weapons and pizza boxes full of unhealthy foods to poison people.
Zero is a kind character who dreams of exploring the galaxy as a Saba. He’s not supremely intelligent and he’s physically average, so it’s easy to connect with this “normal” young boy. Readers will sympathize with him since he’s an orphan struggling to survive in a world with no adults. He travels to a distant asteroid where he trains to become a Saba, an explorer of the galaxy. He ultimately wants to find out what happened to his first mentor, a famous Saba who’s missing and presumed dead. Zero struggles to master his Kobasticker and later learns there may be a reason for his problems. The history of his Kobasticker comes with complications, like bounty hunters who will kill for it, that add additional drama for readers to enjoy.
The author provides many obstacles to Zero’s mission, as the characters scamper to avoid the Space Force and later clash with the Space Mafia. Zero and his two mentors are faced with cryptic clues to follow, as they try to retrieve the Mask of the Shaman King before it’s used to free a long-imprisoned terror to the galaxy. They can’t always trust apparent friends, and that’s not just because transformation Kobastickers are available. Other people are searching for the mask and they will go to any extreme to get their hands on it. Zero and his friends are forced to escape death or imprisonment throughout the entire story.
What didn’t work as well:
The main conflict isn’t introduced until the middle of the book, so the first half of the story doesn’t have a destination to focus on. It’s my preference to have some idea of the problem earlier in the plot, but it may not bother others. It’s not really a big issue but it doesn’t work as well for me.
The Final Verdict:
Stay true to yourself. The story is exciting, creative, and fast-paced, especially in the second half of the book. The plot is familiar and easy to follow, so readers are able to focus on the entertaining descriptions and details the author incorporates. I recommend you give this book a shot, especially lovers of science fiction.

You are here: Middle-Grade Review: Children of Stardust by Edudzi Adodo