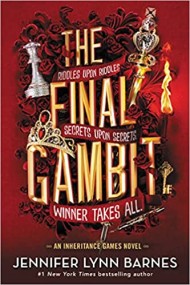 Avery’s fortune, life, and loves are on the line in the game that everyone will be talking about.

But as the clock ticks down to the moment when Avery will become the richest teenager on the planet, trouble arrives in the form of a visitor who needs her help—and whose presence in Hawthorne House could change everything. It soon becomes clear that there is one last puzzle to solve, and Avery and the Hawthorne brothers are drawn into a dangerous game against an unknown and powerful player.

Secrets upon secrets. Riddles upon riddles. In this game, there are hearts and lives at stake—and there is nothing more Hawthorne than winning.

THE FINAL GAMBIT is a thrilling conclusion to the THE INHERITANCE GAMES series. Avery is nearly to the end of the year she needs to spend at the Hawthorne House before she will inherit billions, and she is still reeling from all the things she has learned during this time. Before the time is up, the old man and one of his former adversaries has another twist coming for her, and the clock is ticking for both her inheritance and the lives of those she cares about.

What I loved: In many ways, this book solidifies the things that were happening at the end of the previous. Avery has really decided who she is and who she wants to be, and she is not compromising along the way. Her character growth has been enormous since the first book, and I loved how she was assertive in standing up for herself, believing in her own mind and abilities, and making things happen. Likewise, the romance for her becomes absolutely undeniable and clear in this book, and I loved that for her.

The brothers have also grown and changed throughout the series, in no small part due to their interactions with Avery. Their childhood was challenging in some particularly unique ways with the ways affection was given/withheld and the ways their value was tied up in these competitive games. While some of these elements are impossible to separate, each of them does seem to be reaching a point where more healing is happening and they are really coming into their own. Grayson’s arc in particular was really developing as he begins to really confront his past and emotions, though Jameson and Xander also continued to grow.

The riddles and mysteries were just as fun in this book as in the previous, with the time pressure of the lives at stake, and the addition of new characters/scenarios with Eve and the villain. Avery, the brothers, Rebecca/Thea, and Avery’s sister/friends were all included in the solving at various times, and it was great to see everyone again – so many characters to really fall in love with. The riddles themselves are just as clever as before, and they were coming from two sides, which really added something special.

The plot also brings in some more thorough answers over why Avery was chosen and some of why Tobias was the way he was. Other themes around monetary power, the treatment of women in power/by men in power, playing the long game, romantic relationships, guilt and its weight, emotional scars, coping strategies, and being true to yourself. Much of the story revolves around the power that comes with wealth and the ways this is distorted by the individual in possession of it. In a way, the Hawthornes and others like them have the ability to misuse/abuse this power so easily and have the world accept them along with their misdeeds. This is reflected in the world around us, but the series really challenges the morality of such power – a theme worth exploring.