Back in 2011 when I first started drafting Skid, it never occurred to me that my main character Gabrielle would be considered unusual. All I remember from that the time was wanting to tell a story that combined some of my favorite elements—romance and ghost stories and murder mysteries and crows that might really be servants of the underworld coming to steal your soul. Oh, and it would be set in an apple orchard, which struck me as the kind of almost mystical place where these various elements would naturally converge.

It would also star the sort of main character who I never saw in YA books, a girl that would be completely normal within the banality of my own existence. A girl living with an injured back and chronic pain.

See, my mother has been living with back problems since I was a child. My husband does too, thanks to being hit by a car (while he was on a bike) only a couple years after we met in college. And my own back pain issues began just a few years after that when I was in grad school. Pain was part of my life. A character dealing with those issues on top of falling in love and struggling with school and life and the collapse of her dreams—that was just how the world worked and the story I needed to write. I hadn’t read it before, and I just knew I couldn’t be the only one who could relate.

To paraphrase The Princess Bride, life is pain, or at least it is for many people. Studies vary, but approximately 15% of adolescents and teens report living with chronic pain of some sort. That’s part of the reason why the U.S. is facing an epidemic of addiction and overdoses caused by narcotic pain relievers. (While many people abusing these drugs may not need them, data suggests that most people who abuse painkillers started out taking the  drugs for legitimate pain issues.) Modern medicine is capable of amazing feats, but its ability to address pain is woefully inadequate. It’s not just drug dependency that goes along with chronic pain either; it’s depression and suicide and an overall reduced quality of life.

Reading has always been one of those things that’s helped me cope, whether with pain or daily life stressors, and there’s a reason why I gravitate toward reading escapist stories. But even purely escapist stories can—and do—show us possibilities for real life. So long before I figured out the details of the orchard and its mystery (or the cute farm boy who lives there), I knew one thing about Gabrielle’s story. It had to be honestly hopeful. That is, I wanted Gabrielle’s story to be true to my experiences and to not trivialize what she goes through because there are no miracle cures in real life, not even love. In fact, I tend to believe in the opposite—we must heal ourselves in order to find love. But within that context, I didn’t want Skid to be a sad story because living with pain doesn’t need to be sad.

As Gabrielle figures out in Skid, we always have choices. Or as she puts it, as a former swimmer with shattered with Olympic dreams, we can either keep swimming or we can let ourselves sink. Some days, that choice is harder to make than others, but ultimately, I hope we all find ways to cope and to work around whatever it is in our lives that’s trying to hold us back. I want everyone to choose to forge ahead, grasping the precious moments of life with both hands—the ones that remind us that life is, in fact, more than pain. It’s the fluttery feeling of first love, the sweet crispness of fresh apples, and the mysteries of the past and awe of the unknown.

And it’s there for all of us. Tracey Martin wanted to be an astronaut, a doctor, and an actor, possibly all at once. Instead, she studied psychology, and that led her to have an epiphany–imaginary people are way more fun than real ones. And so she became a writer.

She likes her coffee simple, her music epic, and her movies to contain explosions. A city girl at heart, she doesn’t understand how she and her husband ended up living in New Hampshire, but writing keeps her off the mean, small town streets.

Skid is available for purchase. 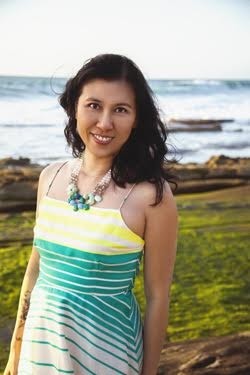 Cindy Pon is the author of Silver Phoenix (Greenwillow, 2009), which was named one of the Top Ten Fantasy and Science Fiction Books for Youth by the American Library Association’s Booklist, and one of 2009′s best Fantasy, Science Fiction and Horror by VOYA. Her most recent novel, Serpentine (Month9Books, 2015), is a Junior Library Guild Selection and received starred reviews from School Library Journal and VOYA. The sequel, Sacrifice, releases this September. WANT, a near-future thriller set in Taipei, will be published by Simon Pulse in summer 2017. She is the co-founder of Diversity in YA with Malinda Lo and on the advisory board of We Need Diverse Books. Cindy is also a Chinese brush painting student of over a decade. Learn more about her books and art http://cindypon.com.
Tweet