Author Chat with D.A. Mucci (Ignatius and the Swords of Nostaw #1) Today we are chatting with D.A. Mucci, author of

Ignatius and the Swords of Nostaw #1!

Read on for more about D.A. Mucci and his book! 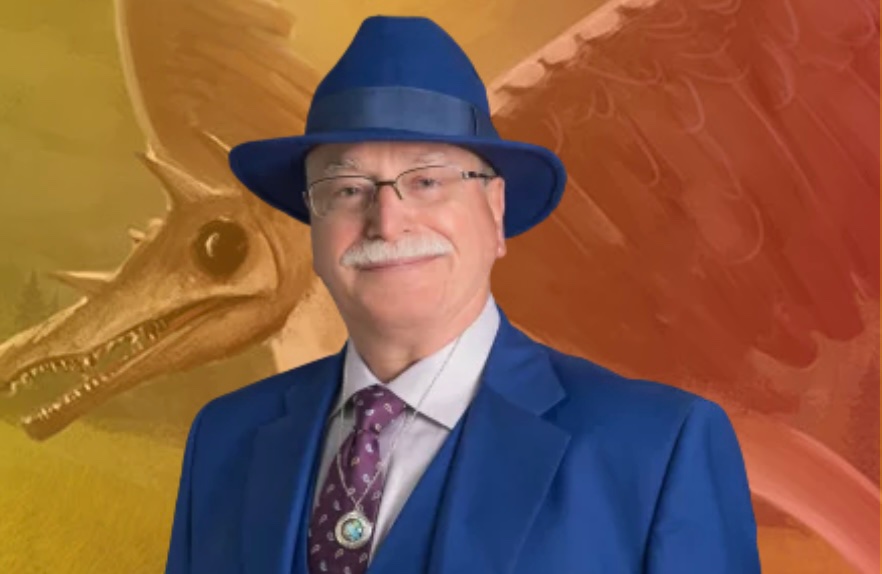 As an Emergency Room physician for nearly 40 years, D.A. Mucci found that the pandemic brought new horrors into the ER. Writing fantasy fiction became an enjoyable escape for him from what was happening in the real world. Now he invites readers to journey with him into the uncharted reaches of the Kingdom of Skye with his YA fantasy debut, Ignatius and the Swords of Nostaw.

Mucci calls both Connecticut and Florida home, and with his wife Jeanne by his side, he's constantly dreaming up new, fantastical creatures, daring escapades, and witty one-liners. He looks forward to writing more adventures for Iggy in this series, and hopes they provide readers the same delightful escape it brought him. Learn more about the author and Iggy's adventures at DAMucci.com.

About Ignatius and the Swords of Nostaw #1: 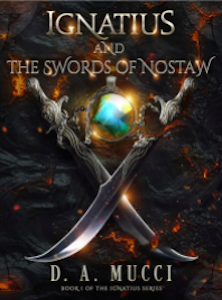 The towering stone Castle Maol, the unrivaled seat of power in the Kingdom of Skye, sat inland almost bereft of life.
Once known for its inspirational beauty, Skye’s forests and meadows were more barren than green now, enveloped by stillness instead of bustling wildlife. Lakes and waterways once teeming with marine life lay stagnant. Most of those who lived here survived under gray clouds of despair.
Several of the eldest knew of the prophecy that would return the land to its prior golden age and quietly hoped it was true.
Only a handful knew the secret that would allow the prophecy to come true. They refused to speak of it.

Fifteen-year-old Iggy is good at three things: languages, witty retorts, and running from a fight. When a guy pulls a knife on him during a high school argument, all the banter in the world isn’t enough to save him, so Iggy resorts to his backup plan—dipping. But before he can make his escape, the locket he always wears around his neck heats up, and someone tackles him from behind, pinning him to the ground.

Iggy’s never thought of himself as a fighter. He’s spent his life running from anything that can’t be solved with a quick one-liner or a snarky comeback. But as he learns more about the strange place he’s landed, one thing becomes abundantly clear: in the World on Skye, they need a hero. And Iggy just might be the one they’re looking for, even if he’s not so sure.

YABC: What was your experience working full-time in an emergency room during the height of the pandemic and writing this book?

As a physician for almost 40 years, most of them in an Emergency Room setting, you see all kinds of ailments, accidents and death.  While no two cases are exactly the same, experience and knowledge helps you decide quickly what action you’ll take to save a life or manage an urgent health condition. Then a pandemic hits that you don’t have a set of experiences to rely on to truly help you manage patients, and treating patients becomes a whole new level of stress as you make your best guess and read the latest medical news to help you treat those patients suffering significantly. All as you are praying none of your protective gear reeks so you don't bring exposure home to the family you love.

These stressful circumstances pushed me to bring this fantasy world to fruition. Most of us binge watched shows during the pandemic and I simply needed a different outlet after a while to feel like I was doing something to help others escape and relax for their stress also.

YABC: So that’s how your protagonist Iggy came to life. Can you tell us a little about him and what readers can expect of his character?

Iggy is an exceptionally bright character who is very understated in his presentation. He lacks self-confidence and self-awareness of his abilities - though he is very intuitive about people, and that is what he relies on to keep him safe as he moves through his adventures. He is kind and generous.

Iggy is a very relatable character who readers will be able to bond with and root for, because many of us likely have felt many of these same emotions and issues throughout life, especially as a teenager.

YABC: How did you go about world building for Ignatius and the Swords of Nostaw?

I was drawn to the Isle of Skye for its rich history that includes folklore and magic, in doing research for the world I wanted to build. I used photos of the Isle of Skye as my inspiration for the landscape of The Kingdom of Skye and Matreach. As my family is comprised of different ethnicities, I wanted to reflect that in my lands, with the four lands having their own uniqueness.

My wife is a stickler for detail and keeping me grounded, so she had a map drawn up for the book and had the website developer create “hot spots” on the website map to help readers visualize locations and happenings.

YABC: Though Iggy is the star, you’ve also created new languages and nearly 50 different characters. Which are some of your favorites?

I love the Madam Trinity character. She doesn’t appear to have it all together, but underneath the crazy facade you know she is an extremely capable, intelligent, and formidable person to have on your side.

I wanted a very diverse set of characters so readers of all ages had someone to relate to.  Iggy is the geeky character while rebellious Lecque fights for what he feels is right. Ansel is the strong mentor Iggy needs. Kylian is one of the strongest male characters, holding true to his principles while being imprisoned for years. Allistair is the most powerful man in Matreach and has a physical disability.

And there are strong female characters along with Madam Trinity, each strong in their own unique way: Raraesa is physically a strong sword fighter with a soft side she doesn’t often show, Trafalga has a bohemian carefree look, with a gift that will help save many and guide Iggy. Nyreada is the strong, brave personality who is typically quiet unless she sees unethical practices, and Scathatch is known for being the best warrior that oversees all, helping in a stealthy critical manner.

I wanted to include different languages to highlight Iggy’s special ability to learn them, to showcase his intelligence. While this intelligence was ridiculed in a typical middle school and high school setting, language is one of Iggy’s strengths and he will use it along the way to accomplish his quests.

YABC: Each character goes through their own life lessons and obstacles. What do you hope your readers ultimately get out of this book?

The most important lesson Iggy learns, and one I hope readers takeaway, is that no one except yourself can put limitations on who you are, what you learn and what you become. Another aspect surrounds unlikely characters. We all run into them in life. Iggy must learn to trust his instincts, which allows him to learn life’s lessons from people who others have dismissed, and to avoid those who want to do him harm.

YABC: Is there a particular scene in the book you are most proud of?

Wow, that’s a hard choice! One may think I would pick a poignant scene with Iggy. But the scene I had the most fun writing is with Madam Trinity. Yes, Iggy is in that scene, but Madam Trinity is wildly wacky. Under that exterior though is a wise woman with tremendous knowledge, if one listens to the words between the lines.

YABC: Without giving spoilers, can you give readers any sneak peek into the rest of the planned series? Will we meet new characters, visit new places, etc.?

Kylian, the Death Knight and Ansel will struggle with the true knowledge they have of Iggy and how important he is to the Kingdom of Skye and the other lands.  Lecque will have to face his own demons that will rear their ugly head, and Iggy will be the only one who can help Lecque with his personal battle. While the Kingdom of Skye and Matreach were featured in Book 1, Dinas Affaron and Cambria will be featured more heavily in future stories.

YABC: What would you say is your superpower? Dare we say it has something to do with venturing into the unknown like Iggy?

In the real world I believe experience develops “superpowers”. On a daily basis for much of the past 40 years, I have had to face the unknowns of how critical patients present differently with the same disease or trauma. This can be daunting and terrifying. I am dealing with lives, not theories. I’ve learned to trust my knowledge and listen to the opinions of the doctors and nurses I work with. I also recognize that I need to learn continually from past experience, as well others, if I want to continue to grow. Iggy will need to learn these lessons if he is to succeed on his quest.

YABC: While readers are awaiting the next installment, they can find other fun insights into the Kingdom of Skye on your website?

Yes, on my website DAMucci.com, there are illustrations of some fantastical creatures and castles introduced in the story. There is also an interactive map that will give readers more insight into the Kingdom of Skye, along with the three other kingdoms introduced: Dinas Afferaon, Cambria and Matreach. As the series moves forward, this map and other information will be updated to mirror the new and exciting adventures Iggy will be going through.

Author Chat with Chloe Gong (OUR VIOLENT ENDS), plus giveaway! ~US Only

Author Chat with Megan McDonald (Stink: The Stupendously Super-Sonic Collection), Plus Giveaway! (~US Only)

Author Chat with Claire McFall (Ferryman), Plus Giveaway! ~US only

Author Chat with Joshua M. Greene, co-author of SIGNS OF SURVIVAL: A Memoir of the Holocaust, plus Giveaway! ~US Only

Author Chat with Brett Bean (Zoo Patrol Squad #3 A New Sheriff in Town), plus Giveaway! ~US Only