Today we are chatting with Nicole MacCarron author of

Read on for more about Nicole and her book! 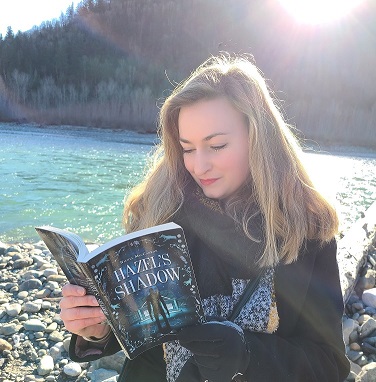 Nicole MacCarron is an accident-prone Canadian from BC’s Fraser Valley. The accidents started at 8, when she rolled off the top bunk and broke her arm. In pursuit of her Education and English degrees, she nearly broke her neck and back. Nicole currently teaches kindergarten and dreams of returning to Ireland (where she once broke her cheekbone in two places). Nicole is a firm believer that any misadventure can be turned into a great story. As such, most physical pain depicted in her novels comes from a place of experience, and helped to make it all worthwhile.

About Her Book:  Hazel's Mirror 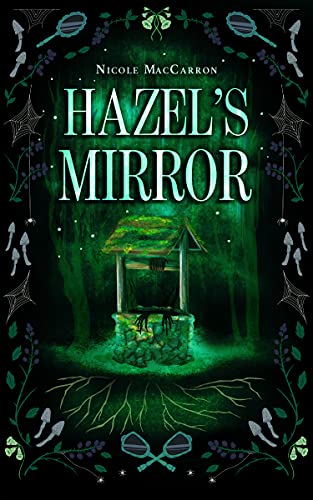 After last year's massacre, Hazel has spent a year suppressing fear and grief. So when the opportunity arises to get out of town and support her girlfriend in a basketball tournament, Hazel is quick to pack her bags. The weekend takes a dark turn when a mysterious boy begins haunting her and Hazel realizes they may have something sinister in common. As their worlds gradually intertwine, Hazel finds temptation among new supernatural abilities. Thrust into the unwanted role of mentor, she must test her new talent to discover if it will help them both, or destroy the last remaining people she loves and unleash her worst nightmare.

I initially wrote Hazel’s Shadow thinking it would be a standalone with a dark ending, but the advice I kept hearing was that writing a series helps to establish you as an author. So I kept following Hazel down other dark paths in my mind, hoping something would spark a plot. As a matter of fact, the title Hazel’s Mirror is what came to me first. I didn’t know what to do with that title, but I knew mirrors had creeped me out ever since I first heard about a certain bloody woman from urban legend. I knew there was something in that arena that I wanted to explore. I was in the shower when I finally had that aha moment and I realized I could weave mirrors together with the Shadow and the ever-popular fear of spiders. I had that awesome feeling of, “Oh, I think I’ve got something here.”

I have a great fondness for all the characters, but Kate took me by surprise. She was only supposed to be in the book for two pages, but I should have known she was going to stick around when I fell in love with the first description of her. I described Kate as “a sunburned goth-type.” Something about the image tickled my funny bone. Not only did Kate insist on sticking around, to my shock she ended up being crucial to the entire novel. Kate was a scene-stealer and an absolute delight to an author who mistakenly thought they were in control.

Something that has been absolutely pivotal for me was realizing that I am not what I create. What I mean is that when people offer criticism, they are not attacking my value as a person. It was only when I detached my self-worth from my novel that I could really take in what they were saying and improve my craft. Having the skill to detach myself from my work had long-lasting implications, specifically when it came time for reviews. Now when someone says my book isn’t their cup of tea, I can shrug it off and say, “Oh well, thanks for trying.” Just a few years ago I would have felt rejected on a personal level. Who I am and what I create might be closely linked, but they are not the same thing. I hope new writers can learn this from me and save themselves some unnecessary heartache.

I think it came out in 2020, but I read it this year. The Empire of Gold by SA Chakraborty. The entire series was amazing, starting with City of Brass. It was the best fantasy series I have read as an adult. I was absorbed like a child, yet the writing was mature. I loved the diversity from the mainstream and the unusual location (Egypt), as well as the totally accessible mythology. I think my favorite part was that a questionable relationship was dealt with in such a satisfying and realistic way at the end of the series. I was so pleased with the author at the point. I highly recommend this series!

I think it’s important for readers to know that there is body positivity and LGBTQ+ representation in both Hazel’s Shadow and Hazel’s Mirror. I wanted to present a complex character rather than having a character whose entire identity and storyline revolves around her weight and subsequent self-esteem. Those types of stories are important, but we also need to see fat characters simply being heroes, and gay characters who are exploring the other complicated parts of their lives just like everyone else. Hazel is heavy and gay, but she’s also an athlete, a good friend, a protective sister, and she can see ghosts. Representation is important to me, but people are not just one thing.  So here’s a heavy, gay character who kicks serious butt during a zombie apocalypse!

Funny enough, Hazel gave me the hardest time! I struggled through about four chapters before I received the advice to add another point of view. Riley was the obvious choice, so I wrote his chapter and BAM, the words were flowing again. Pretty soon I was weaving back and forth between their perspectives with Riley advancing the plot and Hazel wondering what on earth was going on. Better her than me!

Drafting! While this whole book was harder for me than anything else I’ve written, I have always had the toughest time with revising. During the rough draft I can get swept up by the excitement of discovering what happens next, just like a reader. With revising, I already know. I even had to go an unorthodox route with editing this time. I enlisted some beta readers who were willing to read 3 chapters a week. This way I had no choice but to get through edits of a few chapters a week because they were waiting for me. I desperately needed that motivation and I hope I can find beta readers willing to read this way again in the future. I’m relieved I found something that worked for me!

My editor, Sarah Hawkins, said the loveliest thing about Hazel’s Mirror so I’m going to quote her here. She said, “Readers are going to love ‘Hazel’s Mirror.’ It is as heartfelt as it is spooky and thrilling, a perfect combination for the current season.” It was a review I wish I could slap on the back of the book! Wrapping up heartfelt with spooky and thrilling was not an easy feat, so her words really touched me. I don’t know if it’s a superpower to pull that off, but I’m really proud of it. I feel like that combination is part of my calling card, my voice as a writer.