From Pieces to Weight: Once Upon a Time in Southside Queens 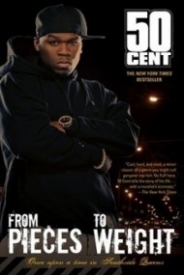 "GET RICH OR DIE TRYIN' That's what this book is about--the good times and the bad times. I wrote this book to explain the world I come from. To a lot of people, I may be too young to reflect on life. And they may be right. But I'd be wasting my blessings if I didn't use the attention I'm getting to shed light on the experiences that have caused me to say the things I say and make the kind of music I make. I want to explain my environment to those who don't come any closer to it than the records they buy or the images they see on television. People want the truth. Even if they can't handle it, they want it. I let you know that I survived nine bullets not to sell records, but because it's the truth. Every time I sit down for an interview, I'm asked, ""Well, 50, how did it feel to get shot nine times?"" But those stories don't hold the weight, the pain, or the hope of my experience. It just can't. This is my mindset and these are the things that go on. This is why I say the rhymes that I say. This is what happened when I was trying to get rich before I died in Southside Queens. So begins From Pieces to Weight: Once Upon a Time in Southside Queens, a violent and introspective memoir that reveals not only 50's story but the story of a generation of youth faced with hard choices and very little options. A tale of sacrifice, transformation and redemption, but it is also one of hope, determination and the power of self. Told in 50's own unique voice, the narrative drips with the raw insight, street wisdom, and his struggle to survive at all costs...and behold the riches of the American Dream. 50 Cent has sold over 20 million records worldwide. His record-breaking debut album Get Rich or Die Tryin' has sold over 12 million units worldwide, with the largest debut in SoundScan history. While his sophomore effort, The Massacre, sold over 1.14 million copies in its fi rst four days of release, he has since become the fi rst artist to have four songs in the top ten of Billboard's Hot 100 since The Beatles in 1964. His business empire includes: a record label (G-Unit Records, a division of Interscope Records), apparel/footwear ventures (G-Unit Clothing and footwear, joint ventures through the Ecko Clothing Company and Reebok, respectively), vitamin water (Formula 50, through Glacéau's Vitamin Water), watch line (G-Unit Watches, through Jacob & Co), and a video game (50 Cent: Bulletproof, through Vivendi Games). His future plans are to dominate the film and television worlds through two new G-Unit ventures in film and television...and his most prized project: the nonprofit organization The G-Unity Foundation, which aims to better the life of urban youth.
Tweet