Goodbye: A Story of Suicide 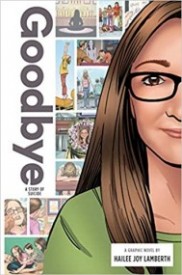 A thirteen year old should be enjoying life, planning her future, anticipating the joys to come. Instead, and sadly for all who knew her, Hailee Joy Lamberth, chose a permanent solution to a temporary problem.

Hailee was an A student, bubbling with enthusiasm and love for life. She danced, wrote poems, and attended classes for gifted students. She loved playing with her little brother, Jacob. They’d play hide and seek and she’d always hide in the same place so that Jacob would find her.

But her favorite interaction with Jacob was when they rode the Ferris wheel together and got stuck at the top. Jacob was afraid, but Hailee reassured him. “We’re practically in heaven,” she tells him. “Well if we die,” Jacob says, “At least we’ll be together.”

When she was twelve years old, the bullying began.

First it was a boy in math class who seemed to have a crush on her. When she rebuffed him, he started sending her mean notes, calling her names, and spreading rumors about her.

Then it was a girl in P.E. who would crash into her when no one was looking.

Hailee tried to avoid the bullies. She decided to drop out of the math class. She made excuses to her parents in order to escape, and her parents believed her. They didn’t know that her life was becoming unbearable.

By the end of the school year, Hailee had begun to cut herself. It was her way of coping with the constant degradation. She overachieved in school in order to keep her parents from asking too many questions. A kid who is bullied often becomes an expert liar.

In seventh grade, the bullying increased, growing like a cancer. Hailee kept up appearances to protect her parents and brother, but inside she was suffering. Two days after her thirteenth birthday, she succumbed to the pain.

Hailee’s parents have decided to not allow her death to be in vain. By working with Zuiker Press to tell Hailee’s story as if she were able to tell it herself, they hope reach out to other young people in crisis, and show them that they do have options -- and to prevent them from bringing the excruciating pain of suicide to their families.

Their hope is that by sharing Hailee’s story, they may prevent another young person from making a fatal choice.

A Story of Bullying and Loss
September 04, 2020
Overall rating
3.0
Writing Style
3.0
Illustrations/Photos (if applicable)
3.0
A (quasi-creative?) non-fiction graphic novel, aimed at a Middle Grade or lower YA audience. It addresses the topic of bullying and teen suicide from a very personal angle.

Art-wise, the cover is probably my favorite aspect. The style makes good use to contrast and a semi-muted color pallet. But faces (especially the dad) were sometimes inconsistent, making it difficult to recognize characters from panel to panel.

I'm deeply conflicted over how to rate this one. The narrative is written by grieving parents, from the imagined perspective of their post-death (ghost?) daughter, Hailee--who is looking back on her entire life and the incidents leading up to her suicide. And while it's affectingly heartbreaking to be shown how much her death has devastated her family, the word choices sometimes stray into the territory of victim-blaming. And there are a great many assertions made about Hailee's thought processes and motivations without supporting evidence (i.e. diary entries, personal emails, notes texts, witness conversations, etc.) Indeed, it is repeatedly reiterated that Hailee never told her parents anything, nor asked for help from anyone. There is only a very abbreviated indication that, in her suicide note, she requested her parents tell the school what her bullies did to her. If in that note she expressed any reasons for lying to her parents and not seeking help, it isn't mentioned.

As a parent to a new middle schooler, I can't fathom being in their position--almost completely in the dark as to their child's struggles (thanks to an apparently incompetent school system) until it's too late. But I also see it as potentially destructive to focus so much on the child's actions and their far-reaching consequences, when Hailee had clearly been pushed into a frame of mind in which she could no longer be held responsible. And the "afterlife" portrayal, while vague and devoid of any belief system influence, does seem to suggest she is being punished in some sense (i.e. she is unable to see or be with her beloved dog, which died of a "broken heart" just weeks after her suicide. And she is supposedly forced to watch the daily agony of her parents and little brother.)

There is a real effort to examine what may have been going on in the lives of her bullies that contributed to them deflecting torment onto her. And while that deserves appreciation, it didn't offer any satisfaction as to whether the kids bullying her ever faced consequences--or indeed, if they even proved capable of experiencing remorse. They do mention that Hailee's parents settled a lawsuit against the school, and Nevada passed a law in her name requiring all schools to report all bullying incidents of the victims' AND bullies' families--which offers some sense of closure.

In the end, I'm just not sure the parents narrating on behalf of their daughter was the most effective way to convey Hailee's story. But for some, this may encourage an expanded perception of how far their life truly reaches.

Bethany Wicker, Listings Manager & Staff Reviewer
"HORSE POWER is a well-illustrated book that talks about the large part horses play in our history. The delve into..."

A Shot in the Arm (Big Ideas that Changed the World)
4.3

How to Talk to a Tiger... And Other Animals: How Critters Communicate in the Wild
3.7

Olivia Farr, Staff Reviewer
"HOW TO TALK TO A TIGER... AND OTHER ANIMALS is an intriguing non-fiction picture book that teaches about the many..."