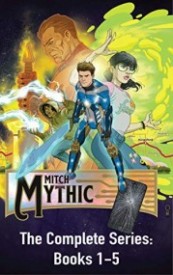 First, the video went VIRAL. Then he went INSTAFAMOUS.

But then it got worse, a lot WORSE, like WTF worse.

Mitch Mythic was a normal kid living a normal life, but after he takes a stick to the crotch during a hockey game, the video of the incident breaks the internet, and his life spins out of control. As he becomes an online laughing stock and his friends abandon him, he is certain he has hit rock bottom. Oh, how wrong he was.

A fight at school leads to a chance encounter in the principal's office with a weird kid named Drak. When Drak offers to help Mitch with his online problem, Mitch reluctantly accepts. And that was when things got weird.

Using a strange algorithm, Drak floods Mitch’s profile with new followers and “likes” at an alarming rate, so much so, that the enigmatic CEO of MindHIve, Robert Chapman, takes notice. Realizing that there is more to Drak than meets the eye, Mitch is drawn into a world of strange technology and inter-dimensional espionage that directly intertwines with MindHIve and its cunning CEO.

After receiving an invite to the annual MindHive convention from Robert Chapman, Mitch finds himself teamed up with an intrepid scientist named Moon SoHee from South Korea. But something is amiss at the convention, and Mitch is certain the CEO of MindHIve is at the bottom of it. Drawn together by circumstances beyond their control, Mitch and SoHee discover that not only is their freedom at stake but that of the entire human race.

MITCH MYTHIC is a book series like no other. Without regard for genre or convention, the series spans the multiverse and pushes the limits of reality to its breaking point. If you are a fan of books that combine action and adventure with side splitting humor and out of this world scenarios, then buckle up and enjoy the ride.
Tweet