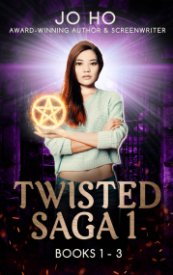 Save almost 40% off the price of the single books when you get this discounted bundle! A new urban fantasy series from the award-winning screenwriter of ground-breaking BBC TV series Spirit Warriors. "I just wanted to be normal, but the day college started a supernatural world opened up. Now I don't know who to trust... or even if I'll survive the night." When Marley moves into her dorm at Blackville University, she has classes to sign up for, parties to attend, and an over-protective father to avoid, who, as luck would have it, has just been hired at BU as its newest History professor. While trying to befriend her roommate, Marley discovers that Cassie might just be the oddest - if richest - girl she's ever known. Then there's Eve, the older girl with a mysterious past who hides her true face under layers of make-up and a bitchy attitude. Thank God for Tyler who seems nice or she would think college life was a bust already. After a disastrous night out ends with them all thrown together for the first time, something happens that no one expected. Something magical. And suddenly they discover they each have been gifted with strange new powers - but why? And who is the mysterious good-looking stranger who seems to know far more than he is willing to tell them? Written like your favorite CW or Netflix show, expect thrills, heart-thumping romance as well as epic twists and turns that will keep you guessing! WHAT READERS ARE SAYING: ★★★★★ - "OMG. THIS. BOOK... So full of twists and epic turns. - Kanyonmk, Amazon Reviewer ★★★★★ - "Spectacular. The action and adventure start from the beginning and don't let up... Ever." - Susan P, Amazon Reviewer ★★★★★ – “This series is amazing, each book just keeps getting better.” – Nicole Henderson, Amazon Reviewer ★★★★★ - “I’d give this more stars if I could. I am hooked on this series.” – Patricia Eroh, Amazon Reviewer ★★★★★ - "All I can say is WOW!!!!! I LOVE THIS STORY!!!!!" – Candy Robosky ★★★★★ - "Hang on to your seats because this series is going to blow you away!" - Holly Stover, Amazon Reviewer ★★★★★ - "One of the best series I've read. Must-read." - Derek Williams ★★★★★ - "Definitely a series to read if you're a fan of Supernatural, Charmed, Pretty Little Liars and a whole bunch of similar shows..” – Jon, Amazon This special edition contains the following books for a discounted price: 1. What Doesn't Kill You (Twisted Book 1) 2. Beware The Signs (Twisted Book 2) 3. See No Evil (Twisted Book 3) AUDIOBOOKS are also available - search for them under the original single edition titles (What Doesn't Kill You, Beware The Signs, See No Evil).

An engaging story
May 02, 2019
Overall rating
4.0
Writing Style
4.0
Plot/Story
4.0
Illustrations (if applicable)
N/A
Characters (if applicable)
N/A
Editing/Design Quality
N/A
Cassie, Marley, Tyler and Eve were great characters with well developed backstories. I enjoyed the story, it did play out like episodes of a TV show.
There was the occasional cheesy line and I didn't quite understand Christian's 'feelings' for Marley, but I liked the idea of the four girls coming together and that their powers were different from what is usually included in other supernatural stories. I would recommend it.
Good Points
Good pacing
Well developed characters
Interesting premise