The Gods of Men 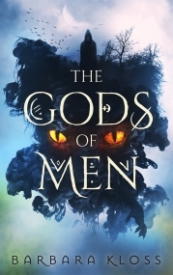 Sable hated the gods. She hated what men did in their name. Magic is forbidden throughout the Five Provinces; those born with it are hunted and killed. Sable doesn't know her music holds power over souls--not until, at age nine, she plays her flute before the desert court and accidentally stops her baby sister's heart, killing her. Horrified by what she's done and fearing for her life, she flees north, out of Provincial jurisdiction and into the frigid land of exiles and thieves, known as The Wilds. There, Sable lives in hiding, burdened by guilt, and survives as a healer. But now, ten years later, someone--or something--is hunting her. On the run again, Sable's best chance for survival is Jos, a lethal man from the Five Provinces, who claims to need her skills as a healer to save his dying father, and she needs the large sum of money he's offered. There's something about him Sable doesn't trust, but she doesn't have many options. A spirit of the dead is hunting her, summoned by a mysterious necromancer, and it's getting closer. Sable soon discovers she's just the start of the necromancer's plan to take over the Five Provinces, and she's the only one with the power to stop it. But harnessing her forbidden power means revealing it to the world, and the dangerous Provincial, Jos, she's beginning to fall for.

A childhood tragedy forces Sable to flee her home, change her identity, and eke out a meager existence in a land that doesn’t want her there. When her past catches up to her, she’s forced seek protection from Jos, a mysterious man with a past of his own. With an evil necromancer on her tail, Sable must finally face what she’s tried do desperately to escape.

I adored Barbara Kloss’s Pandoran series because of her phenomenal world-building and beautiful writing style, and Gods of Men continued that pattern. Sable and Jos are portrayed as flawed individuals, struggling to find their place in a world rampant with prejudice and cruelty. I worried they would not have much chemistry when they finally met, but I was wrong. Their story arcs, both together and separate, are compelling and wonderfully written.


What I didn’t love:

Honestly … nothing comes to mind.

Some authors’ works a good. Some are great. And some are in that upper echelon where you know you’re going to love it before you’ve even read a single word. Barbara Kloss is in that category for me, and I think she will be for you too.

Patrick Hodges, Staff Reviewer Top 100 Reviewer 59 reviews
Report this review Comments (0) | Was this review helpful to you? 0 0
Beautifully Done!
July 19, 2018
Overall rating
5.0
Writing Style
5.0
Plot/Story
5.0
Illustrations (if applicable)
N/A
Characters (if applicable)
5.0
Editing/Design Quality
5.0
There is nothing not to like in this book.

The story:
Sable hasn't had it easy. The daughter of a powerful man, she was sent away from home at a young age when a power she didn't understand showed in her. Years later, she's living as a healer in a village that doesn't want her there. When Jos shows up wanting to take her home with him to heal his father, she's skeptical, but eventually realizes there's no other choice.
Hunted by rabid beings and powerful sorcerers, she fights just to stay alive. As she grows closer to Jos, secrets are revealed and she learns just how much about him she doesn't know.

What I loved:
Is everything an acceptable answer?
Probably not. LOL. This book gripped me from beginning to end. The characters are fantastic and the way they go from distrust to hate to allies is just so well done. Sable is strong in her own right. I felt every bit of Jos' confusion and then when he started to really regret the life he'd lived, it broke me a little bit.
But the real star of this book is the writing style. Every word is crafted to perfection, flowing beautifully, and giving life to a well-developed world.

What was just okay:
Nothing fits into this category for me. It was too good.

Final Verdict:
A beautiful story of two tortured people finding themselves in a dark fantasy world. A must-read for all fans of epic fantasies!