ALEX HUNT and the Chase for Rhapta 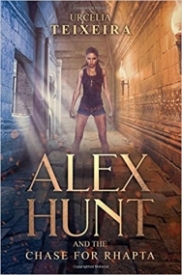 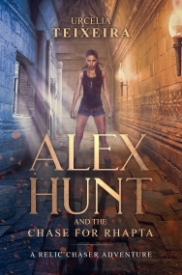 An action-packed Archaeological Adventure Mystery for Indiana Jones lovers! This is Relic Hunting at it’s best! Based on the true legend of the ancient Lost City of Rhapta which mysteriously disappeared near Mafia island off the coast of Africa. "I'm a big fan of Indiana Jones/archeology type books and this one didn't disappoint. Full of intrigue, mystery and action Urcelia Teixeira did an excellent job keeping my interest.” - Amazon reviewer "I thought I knew what to expect but I was way off!  Urcelia has proven her versatility as an author; that's for sure!  Think Tomb Raider meets Indiana Jones with a few added twists. I enjoyed the storyline, the adventure, the culture and the history.  I laughed, I cried, I cheered and feared! A 5-star read I'd recommend." - Amazon review I am Alex Hunt, daughter of the famous Archaeological Hunt Team. Head Researcher and... Relic Chaser!When Alex Hunt's mother tragically dies during her lifelong quest to find Africa's ancient Lost City of Rhapta, Alex develops Agoraphobia (an unnatural fear of specific places and situations) and vows never to chase again.  So when her father, Professor Charles Hunt, Head of Archaeology at a prestigious British University mysteriously disappears several years later, it leaves her with no choice and forces her out of hiding to find him. With nothing to lose, battling her worse fears and with the mighty University behind her, she travels to Tanzania, Africa in search of her missing father. The chivalrous and charismatic Sam Quinn, the University's illusive top Archaeology student accompanies her, and she finds herself in unfamiliar territory with a man who manages to chip away her self-built walls. Her action-packed adventure through the treacherous African Jungle brings forth an abundance of danger, fear, and heartache as she rediscovers her love for life, science and ancient relics, beyond her cocooning existence and disease. Will she find her father and the Lost City of Rhapta or will she die under the curse and native-fearing Rhaptor-bird said to guard the vanished city?  This book is an epic tale of riddle solving relic hunting, courage and fantasy that follows in the tradition of KT Tomb and Mary Deal. It will without doubt delight lovers of Indiana Jones, Lara Croft, and the likes and suits Teen and Young Adult Historical Fantasy lovers. Buckle up treasure hunters. Africa waits for no one.

Mystery and Archeaology
March 30, 2018
Overall rating
3.5
Writing Style
3.0
Plot/Story
3.0
Illustrations (if applicable)
N/A
Characters (if applicable)
4.0
Editing/Design Quality
4.0
When Alex's dad goes missing, she is the only one who can find him because she's also the only one who knows her mother's data. She lost her mother who was chasing the lost city of Rhapta, but Alex doesn't want to lose her father too. For that reason, she travels to Africa with Quinn-a student that a family friend recommends.

As the story progresses, it alternates POV between Alex, her mom, and her dad. We learn that her father has been captured early on, but Alex travels are not easy. In Africa, she's in a car accident and has a run in with vicious animals like lions, as if chasing down her father isn't hard enough.

This was a very easy, light, and entertaining read. I always like the idea of discovering new things. I wish that instead of the viewpoints of her parents, it would've been through Alex's eyes. Overall, it was a fast-paced story.


Final Verdict: I recommend this to fans of adventure and archaeology. It's also a good read to finish during a rainy day.