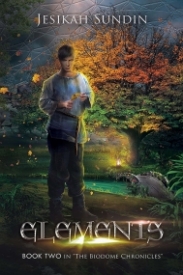 "Feelings are real. They often become one's reality. But they are not always based on truth..."

New Eden Township is more than a dungeon for Fillion Nichols. The medieval biodome community, where Fillion is serving time, is a birthright that torments his life and threatens his future. Sealed inside the experimental Mars colony, there is no escape from anyone, especially the young woman who has haunted his thoughts for nearly six years. To preserve his sanity, he focuses on one goal - decoding the mystery behind the Watson deaths.

It is a mission that shatters his distorted perceptions of reality and helps rebuild the fractured elements of his life.

Meanwhile, to prove his worth to the Daughter of Earth, a young nobleman ventures beyond the walls of the biodome and experiences the Outside world for the first time. But his quest takes an unpredictable turn when he meets Lynden Nichols and Mack Ferguson, who draw him into their world - a community also confined and isolated by society. The Anime Tech Movement's computer underground is far from the rustic, honorable life the young nobleman knows. Yet, he discovers familiar elements within the high tech subculture that may sustain the home he left behind.

As worlds converge, each young man faces a choice that will affect the survival of an entire community. And to save the generation they fight for, both men must defy the boundaries of everything they know.

Cultures collide as The Biodome Chronicles continues in a compelling quest for truth, forging an unforgettable story rich in mystery, betrayal and love.

Are you ready to discover what is real?

*****
For fans of Under The Never Sky by Veronica Rossi, the old world meets new world story backdrop of "The Biodome Chronicles" is sure to keep you on the edge of your seat!

****
"...Elements was a beautiful, original, and well-written second addition to this series..."
-- Kookie Krysp Reviews

The crispness and confidence with which the narrative is revealed, and how the characters are brought to life, is brilliant. The textures and visuals are vividly woven into the plot layers, all threaded together with Jesikah's masterful use of language and dialogue."
-- Artic Fricbergs, author of The Muskokans
Tweet

I can't wait for Gamemaster! :D

Liz Top 500 Reviewer 4 reviews
Report this review Comments (0) | Was this review helpful to you? 0 0
Need more!!!
January 14, 2018
Overall rating
5.0
Writing Style
5.0
Plot/Story
5.0
Illustrations (if applicable)
5.0
Characters (if applicable)
5.0
Editing/Design Quality
5.0
Where do I begin?! I love Legacy. I was immediately sucked into the world and characters and was more than ready for the next upon completion.

But Elements? Elements blew any and all expectations I had from Legacy out of the water. I can't get enough of the delightful, versatile cast of characters. The story is constantly changing, an incredible blend of mystery, sci-fi, fantasy, and romance. Jesikah's writing style is smooth and enjoyable to read. And even with all the setup from the first book, I couldn't for the life of me predict how this book would end or where the next one will go. I can not wait for more!!!

Good Points
Jesikah has a beautiful writing style and her characters are gems!

Tyffany Hackett Top 1000 Reviewer 2 reviews
Report this review Comments (0) | Was this review helpful to you? 0 0
Powered by JReviews
How to resolve AdBlock issue?
X