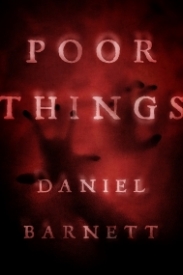 Summer crashes to an end on a winding road. Just like that, football superstar Joel Harper finds himself rolling his wheelchair into a new school in a strange town. Soon he’s making friends of misfits, taking lessons in Iron Maiden, and trying to keep away from a ruthless bully with a penchant for switchblades. Little is he aware, something ancient and wounded has awoken deep beneath the tiny mountain community, and when it surfaces, all of Honaw will know its pain.

Classic Horror and True Romance
August 10, 2016
Overall rating
5.0
Writing Style
5.0
Plot/Story
5.0
Illustrations (if applicable)
N/A
Characters (if applicable)
5.0
Editing/Design Quality
5.0
Anyone who has read my reviews for a while knows that I’m a huge Daniel Barnett fan. I was thrilled to hear that his latest book, Poor Things, might fall into the YA spectrum. Barnett’s writing is pure poetry, and this one is his goriest, grittiest yet. I’d say it rests rather precariously on the young adult line, and it would certainly appeal to adult horrorphiles, because this author never pulls any punches and his hits can be brutal. Poor Things is bloody and frightening, with language not meant for virgin ears. Parents, if you think your little miracle isn’t ready for something along the lines of Steven King’s scariest tales, this isn’t their book.

For more mature teens: dive in. Poor Things is also beautiful and touching, a poignant coming of age story.

Main character Joel has it coming from the first pages, as the bullying, arrogantly jocular older brother to a wimpy, pimply, book-reading nerd. You’ll know immediately if you can’t handle Poor Things, because Joel loses everything (including that little brother) in a violent car crash before you can even blink. The change in him is swift and soul deep, and we experience this story through his new life as a crippled nobody in a tiny mining town.

This life changing event, this one tragic moment, serves to destroy and create. It’s a common theme with Barnett—tear it all down, build it all back up—and something worth pondering for any young reader, especially in those days before the brain has developed enough to understand consequences. Physically incapacitated by his broken body, Joel’s mind speeds ahead: “Adolescence is an earthquake, one that feels like it will never end while you’re living it, and eventually there comes a choice. You can crawl under your desk and hide, or you can stand up on top of that shaking desk and dance.”

He isn’t the only character I fell in love with, not by far. The heavy metal loving tomboy with a white-blonde buzzcut, Ash, is one of the strongest female supporting characters I’ve met in a long time. She’s cool, she’s smart, she’s tough, and she’s best friends with the biggest dork outcast in school. Ash is all soft underneath, and yes, though Joel is paralyzed from the waist down, there is the possibility of romance. It’s hard to say who is the hero of Poor Things, because throughout most of the book, Ash saves Joel’s derriere again and again. Without her, he could never have…sniff…well, you’ll cry at the end, too.

The town of Honaw itself has enough personality to be thought of as another character--an odd and mildly disturbing one from the beginning. Or, rather, the thing which lies beneath Honaw engineers that creep factor. Okay, that’s it! I can’t say any more or I’ll give it away. Yet, bells and whistles aside, this is a classic monster tale. No monster I’ve ever imagined, however. Only Daniel Barnett could imagine such a strange, sad, dangerous beast from the depths of time, and only this guy could make me love that thing by the end.

Sarah Wathen Top 500 Reviewer 8 reviews
Report this review Comments (0) | Was this review helpful to you? 0 0