Crossing the Barrier - The Gray Eyes Series Book One 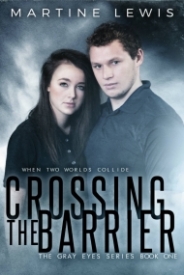 High school student Malakai Thomas, star wide receiver of the varsity team, collides with band member Lily Morgan on his way to football practice. As days go by, Malakai cannot get the petite clarinetist out of his head. Lily Morgan can feel everyone's emotions. She loses her ability to shield herself against them the day Malakai runs into her. Now she must try to maintain her sanity in the emotional jungle that is high school, as well as deal with her growing feelings for Malakai. Can Malakai get over the social stigma and his own internal struggle to be with Lily? Is Lily's secret too big to accept, even for him?

If Only We All Had Shields in High School!
June 28, 2016 (Updated: June 28, 2016)
Overall rating
4.0
Writing Style
4.0
Plot/Story
3.0
Illustrations (if applicable)
N/A
Characters (if applicable)
4.0
Editing/Design Quality
5.0
Lily Morgan is an empath, born with a supernatural ability to feel the emotions of others around her. A surrogate child, she has no idea why or how she has this ability, but she is extremely grateful for her developed skill of “shielding” all those emotions at will. Except…her shields begin to fail within the first few pages of Crossing the Barrier.

Oh, another thing? Lily is in high school. So, imagine the multitude of hormone laced angst she’s slammed with when, say, walking into the school cafeteria. Or, traversing a crowded hallway. Or, basically being anywhere there are a bunch of other teenagers. A reader does have to imagine some of that rich soup of drama, because author Martine Lewis skims over the gritty details of many possibly awesome exchanges—not that engaging a reader’s imagination is a crime, but Lewis misses an opportunity to show us her chops there. However, I like the metaphor of the empath without shields, in the midst of the chaos of high school. I think that’s how a lot of us feel at that age, all raw nerves and raging passions. Lily’s love interest is nearly as bad at dealing with emotions as she is, and he’s no empath.

He’s more sensitive than most young men, though, and readers won’t have a tough time falling for Malakai, just as does Lily. He’s a gorgeous, popular football player, but he longs for a girl he can really talk to, someone unique and genuine. He finds that in “band geek” Lily in spades, but she’s struggling with her lost shields. Accordingly, she comes across as a bit too much the helpless maiden at times, relying on her boyfriend’s strength. Who doesn’t swoon for Prince Charming, but that’s a dangerous message for young girls. In fact, Lily’s dependence on Malakai does backfire. He’s got his own problems. All in all, though, this is a sweet love story, and their faults make for more believable characters. I did find myself rooting for an alternate love interest by the end of the book, but don’t worry: the ending is a happy one.

The ending comes quickly in the last quarter or so of the book, and after a bit of a slow start, I was excited for the accelerated pace and clues to a deeper story. Initially, I believed the book title had to do with some sort of supernatural force or science fiction spin on what is mostly a romance. It doesn’t take long to realize that the “barrier” refers to a social divide between nerds and cool kids. I was taken aback by the hard line drawn there, and it’s difficult to believe my own high school days were quite so superficial and prejudiced. I guess maybe they were, though, and I’m just lucky to have survived without any lasting scars or lurking memories. By the end, Lewis does tie that barrier into something beyond the natural realm after all. There is something behind this empath thing!

Crossing the Barrier is a good start to a fun series for younger teens and middle graders. It’s a clean read, in clear, straightforward language without profanity. Though ideas about sex are explored and there is obvious passion between Lily and Malakai, one must imagine what finally happens behind closed doors. There is some mild violence, and Lily receives her mother’s disgust for her as if the woman has a megaphone. She unleashes some powerful venom, and Lily weathers it all. The way she deals with her mother’s rejection hints at a deeper well of emotional maturity, and I hope Lily becomes a stronger heroine in book two. The underlying mystery of her empath abilities, with a hint of her harnessing greater power in the future, has promise. Martine Lewis has laid solid groundwork for a moving story of a young woman on an incredible journey, and I’m interested to see where she leads us next.

Sarah Wathen Top 500 Reviewer 8 reviews
Report this review Comments (0) | Was this review helpful to you? 2 0