The Hawk In Winter (Rise of the Hawk Book 1) 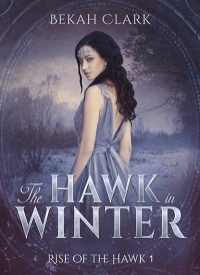 Maevan, Korla, and Renna, three devoted sisters, have been trained all their lives how to defend themselves, hunt, and strengthen their minds by their mother, Queen Xenya. What they didn't prepare for was separation.

Many years ago, Queen Xenya of the First House was forced to flee her throne to the icy land of Cardea. Now the rogue queen, Shaezen, has demanded Xenya's eldest daughter, Maevan, return to the ruling city of Traven. Alone.

Mae loves her home and family but understands the necessity of her placement within the palace of their enemies. Her mother has been preparing Mae and her sisters for the return of the First House to power their entire lives. Something no one could prepare Mae for is the sheer evil of Queen Shaezen and her many devious plans. Mae must find a way to survive her time in the palace while dealing with an evil queen, romance, betrayals, religious fanatics, and court life.

Excerpt:
Maevan crept slowly along the winding stairs to the window she knew faced the gathering. In her hand, she carried her longbow and a single black feathered arrow, of which she took extra care not to touch the poisoned tip. The poison covering the tip, Maklahnan was known for being extraordinarily deadly, bringing death within an hour. There was no known antidote. Mae briefly wondered where Linna managed to get her hand on it. Maklahnan was outlawed and it wasn’t known to be actually used within the Houses. Now it would be.
The guards which normally stood watch at the base of the tower were celebrating with everyone else, which once again reminded Mae that they were truly only there to keep a watch on her. The fact that they had left to celebrate, thinking Mae was gone, was a boon she had not counted on. Now it would help her case that she was unaware of the assassination. After the arrow was let loose, Mae would quickly make her way back to her room, drink the kell flower tea which would sicken her and when they arrived to question her, she would be vomiting and her alibi of being sick would continue to be believed.
From this level, Mae could see and hear what was going on in the large side courtyard where the gathering was falling silent. Shaezen was now standing in the center of the dais and the newly appointed priests were around her. Mae slowly notched her arrow and then drew back the bowstring, aiming carefully as one of the priests spoke.
“Behold! The comet that blesses our Queen! Here, on this night, it lights the sky, showing our people who should continue to be our true ruler… Shaezen!”
The crowd, either because of people planted within the crowd to hype them up or genuine excitement, yelled out, “Shaezen!”
Maevan felt sick as she watched Shaezen take on a beatific smile and clutched her hands to her heart as she benevolently shouted, “My people!”
The priest waved his hands to quiet the people. However, the people fell silent too quickly to be natural. There was a long dramatic pause and then he raised his hand to the comet. For a long moment, he said nothing, but Mae steadied her aim. As she did, she found it hard to concentrate on what she had to do. She had to do this; she had to finish pulling back the arrow, finish her aim and let it fly. Sickness filled her stomach and the image of Greygon’s face as she stabbed his throat floated into her mind. The sickness she felt when she had killed him. Killed him in self-defense, she reminded herself. Once she let this arrow fly, Maevan would become a murderer.
Tweet

Lady Ronin Top 500 Reviewer 5 reviews
Report this review Comments (0) | Was this review helpful to you? 0 0
Powered by JReviews
How to resolve AdBlock issue?
X

Beth Rodgers, Staff Reviewer
"'TBH, This is SO Awkward: A Novel in Text' by Lisa Greenwald is quite interesting in that it is written..."

Jazmen Greene, Newsletter Manager
"I often hear it said that writers are bred, and sure you can breed some decent writers with whatever amount..."

On These Magic Shores
5.0

Karen Yingling, Staff Reviewer
"Juliette's father is a baker in Belgium in 1944, and has been threatened by the occupying Nazis into giving them..."

Karen Yingling, Staff Reviewer
"In The Unlikely Story of a Pig in the City, Josie and her large family adopted Hamlet, a pig. When..."

Karen Yingling, Staff Reviewer
"Change is coming to Kidahara, a magical forest in the Joson, a kingdom in a diverse realm where there is..."

Karen Yingling, Staff Reviewer
"Mac lives with her parents, Hank and Coral, in a small house in Portland. Small, as in she sleeps in..."

Daring Darleen, Queen of the Screen
4.0

Karen Yingling, Staff Reviewer
"Darleen comes from a long line of entertainers; her father and his siblings are all part of Matchless Studios, a..."

Karen Yingling, Staff Reviewer
"Michael Prasad and his family live on a colony on Mars, under a dome that controls the environment. His father,..."