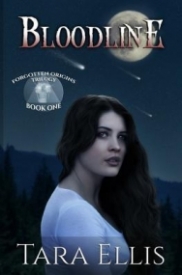 Sixteen-year-old Alex has always suspected her father’s death wasn’t random, but she never guessed how deep the mystery runs or what it involves. When a rare meteor shower is followed by a highly contagious infection, the people she once knew so well start acting like they have a similar purpose that doesn’t include her. Alex can now only rely on her friend Chris and loyal dog Baxter as she plunges into a strange, new world predestined since ancient times. Wandering the mountains of the Pacific Northwest, deciphering cryptic messages left by her father, desperately searching for a cure-will Alex have the courage and faith to even survive? Bloodline is the first book of the Forgotten Origins Trilogy.
Tweet

The Egyptian tie-in to the virus is fantastic. Loved the mystery and clue hunt behind the death of Alex’s father as well as the origins of the virus and anti-virus. “The Shiners”, as the infected are called, are delightfully creepy without being over-the-top about it. The writing is clean and crisp and wonderfully told through the eyes of a sixteen-year-old girl, Alex. And the story is haunting. There were moments I swear my blood chilled, it was that delightfully creepy. Delightfully creepy in all the best story ways, of course.

Recommended to those who enjoy YA scifi and mystery.

Jesikah Sundin Top 500 Reviewer 16 reviews
Report this review Comments (0) | Was this review helpful to you? 0 0
Infected is NOT your typical YA Scifi
July 16, 2014 (Updated: January 16, 2018)
Overall rating
4.6
Writing Style
4.0
Plot/Story
5.0
Illustrations (if applicable)
5.0
Characters (if applicable)
4.0
Editing/Design Quality
5.0
-Review from Lorna on Goodreads, a Rabidreader reviewer:

"While on Goodreads yesterday, a writer in one of the groups I frequent, mentioned her book was free on Amazon, and because I am bound and determined to fill up my TBR pile until my Kindle explodes(sarcasm), I went to look for it. I found it, and also saw some good reviews, so I had to download it. I really had no intentions of reading it now, but after finishing another book, started this one in the middle of the night last night, and I literally could not put it down!

Alex is sixteen, and lives in a small town in Washington state with her widowed mother, and ten year old brother, Jake. They go to watch a meteor shower, a once in a five thousand year event. Things get scary, when debris starts hitting earth. The next morning, her mother is deathly sick-like your worse cold multiplied by a hundred, or so. Alex goes out to the store to get cold supplies, and realizes that there’s a run on all the cold supplies, and everyone she sees, seems sick. While out, she runs into Chris, a boy from school, that she kinda knows a little. He’s not sick, but the two compare notes on how many people obviously are. When people start getting better, and obviously are not the same as they used to be, things get pretty scary, and fast.

I really liked the characters of Alex and Chris. They are faced with horrible situations, people in their life dying, or acting strange, and still manage to persevere. Alex is a typical teen when this starts, and while she does break down at times, she becomes a much stronger person by the end. Chris is her rock, the only person she can lean on when the going gets tough, and boy does it get tough! I also really liked Jake, the little brother. He ends up being way smarter then his years at times, but still remains a good young character. Everything might be going to hell in a hand basket,but he still trudges on. And last but certainly not least, I loved the dog. Yep, there’s a wonderful, intelligent, golden retriever, named Baxter, that actually had a big part in the book. And no I can’t help that I totally pictured Lassie at times, and yes I know it’s two completely different kinds of dogs!

In the beginning, I wasn’t sure where this book was going. Was it going to be dystopian? Were there going to be aliens? Was there a government conspiracy? Why did her Egyptian father leave her a book on ancient Egyptian history, and why did he leave her clues? Was her father’s death simply a mugging, or was he murdered? Lots of questions to be answered here for sure!

It ended up being a really fast read, well written, and I have already bought and started the second book in the trilogy. I enjoyed the mystery, the conflicts, the intricate, and well thought out plot, and the friendship between Alex and Chris. It’s young adult, and I would classify it as science fiction, with a hint of a horror vibe. Actually, the more I think about it, it would make for an excellent movie!4.5 rounded up" (RabidReads.com)

Tara Ellis Top 1000 Reviewer 2 reviews
Report this review Comments (0) | Was this review helpful to you? 1 0
Powered by JReviews
How to resolve AdBlock issue?
X