Out for Blood (Transylvanica High Series #2) 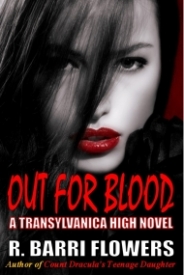 From R. Barri Flowers, the bestselling author of the young adult vampire novel, COUNT DRACULA'S TEENAGE DAUGHTER, comes the exciting book two in the Transylvanica High series, OUT FOR BLOOD. Sixteen-year-old honor student Kula Lockhart is in her second year at Transylvanica High School in Harbor Heights, Michigan. It is one of several integrated pilot schools across the country where human and vampire students peacefully coexist. Kula recently learned that she is the half human, half vampire daughter of Count Dracula. This has made her a target for those who hate her powerful Dad and vamps in general. As she comes to terms with her heritage and newfound abilities, things begin to heat up between Kula and her mortal boyfriend, Eriq Pratt. She also has her vamp guardians Ivan and Amelia, as well as several human and vampire friends, to balance her evolving life and times. When Kula suddenly finds herself being pursued by a new handsome half vamp at school, Sebastian LeBlanc, she is strangely drawn to him, even if her heart belongs to Eriq. Yet Kula can’t help but wonder if it is more than coincidence that Sebastian just happened to arrive in town at around the same time that a vampire or vampires began killing humans. Could Sebastian be behind these vicious attacks? Another new vampire, Gabryela Roswell, befriends Kula, but has a hidden agenda. In the meantime, Kula has competition from an attractive human girl, Yvonne Elwood, who has her eye on Eriq. She also has to deal with the gorgeous and mean-spirited cheerleader vamp, Jacquelyn Brossard, a member of the rival Doerzic clan. As Kula grapples with these issues and the changes in her life, she tries to learn more about her mother, who died in childbirth, from the only person who can give her answers--her dad, Count Dracula. Fans of popular teen vampire and paranormal fiction series such as Twilight, True Blood, Vampire Diaries, and Vampire Academy will love OUT FOR BLOOD in this captivating series. Now in eBook, and soon in print and audio. Buy it today! Also, look for other bestselling young adult novels by R. Barri Flowers, including TEEN GHOST AT DEAD LAKE, GHOST GIRL IN SHADOW BAY, DANGER IN TIME, and CHRISTMAS WISHES: Laura’s Story. http://www.amazon.com/Out-Blood-Transylvanica-High-ebook/dp/B00GF64HUW/ref=sr_1_1?s=digital-text&ie=UTF8&qid=1383581764&sr=1-1&keywords=out+for+blood+r.+barri+flowers http://www.amazon.co.uk/Out-Blood-Transylvanica-High-Series-ebook/dp/B00GF64HUW/ref=sr_1_1?s=digital-text&ie=UTF8&qid=1383587754&sr=1-1&keywords=out+for+blood+flowers http://www.barnesandnoble.com/w/out-for-blood-rbarri-flowers/1117314111?ean=2940149009664 http://www.smashwords.com/books/view/374287 See book trailer: http://youtu.be/ndNTaFzpu28
Tweet