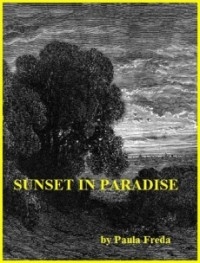 An Inspirational Tale (a story of the First Saint Canonized by Christ Himself) based on Biblical references and historical legends associated with Dismas, the Third Thief (patron of prisoners) who was crucified alongside Christ. Paula Freda presents a fictional-historical spiritual tale of an ordinary man on a path to hell, but saved by Christ. Many cultures and legends place Dismas at several crucial moments in the life of Christ. A romanticized, spiritual tale of a man and his Savior. Excerpt: ....The child's gaze rested on the three wise men, for that was what they must be, Dismas surmised, astrologists perhaps, or emissaries from kingly courts. The mother of the baby thanked them with a smile so beautiful, so filled with peace and benevolence, that Dismas held his breath. The father thanked them as well for himself, and his wife, Mary. So that was her name, Mary. Yes, it fit her. Of all three gifts, he appreciated the gold the most. It would buy the family food, and shelter, and wool and cotton for clothing. But it was a dangerous gift to give a family on the move. He thought of Gestas and the other thieves. For sure, word of what was transpiring would reach their ears. He felt afraid for this beautiful child, and the sweet lady and kindly man. His gaze moved to the child, and as if it felt his fear, the baby's gaze met his. Dismas blamed the long hours he had spent on foot the past hours for the sudden haziness he felt, and the thought that entered his mind unbidden. Kind spirit, protect us on our journeys. My time has not come yet." Dismas shook his head to clear it. He needed to rest before he began his journey back to the cave where his companions hid. He determined to say nothing of what he had witnessed. Hopefully, by the time word of mouth reached his companions, this holy family would be well out of their thieving region. Haim also had entered the stable and was on his knees, his eyes fixed adoringly upon the child. Dismas withdrew so that others could pay homage. He waited outside and when Haim finally rejoined him, his face was radiant with joy. "I must return to my sheep, but tonight I know is the beginning of new era. I may not live to see its outcome, but my heart is filled with hope." He clasped Dismas' shoulder warmly. "Will you return with me?" Dismas shook his head. "I'm tired and hungry. The hunger I can stave off for another few hours, but the tiredness in my bones, even at my young age, that I need to deal with now. Perhaps the family won't mind if curl up in the corner of the stable out of view of the visitors and the landlord." He did not dwell on the other reason, at least not in his conscious mind, that he wished to remain near this precious family for a little while longer, because the child had asked him. Dismas slept and dreamt he stood at the bottom of a hill, looking up. At the top were three crosses. Three tortured forms hung upon them. He wished to know who they were and began to climb the hill. Just as he reached the top, a noise behind him intruded upon the dream and he woke, startled. He began to rise and realized a wool-spun blanket covered him. He stood up and moved quietly toward where the family of three slept. He smiled warmly as he saw that the blankets that covered them matched the one that had covered him. It was clear to him that this precious family were very kind and caring. Again his hearing, well trained over the years he had spent running and hiding from slavers and Roman Centurions, alerted him to someone else's presence in the stable. A donkey stabled near the sleeping family, shifted nervously. Dismas sprang into action. With lightening speed, he drew a small dagger that he kept tied to his leg just below his hip under his tunic. Dagger in hand, he jumped over the stall fence....
Tweet