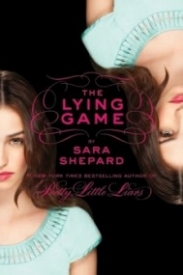 "I had a life anyone would kill for. "

The worst part of being dead is that there's nothing left to live for. No more kisses. No more secrets. No more gossip. It's enough to kill a girl all over again. But I'm about to get something no one else does--an encore performance, thanks to Emma, the long-lost twin sister I never even got to meet.

Now Emma's desperate to know what happened to me. And the only way to figure it out is to be me--to slip into my old life and piece it all together. But can she laugh at inside jokes with my best friends? Convince my boyfriend she's the girl he fell in love with? Pretend to be a happy, carefree daughter when she hugs my parents good night? And can she keep up the charade, even after she realizes my murderer is watching her every move?

Overall rating
4.4
Plot
4.3  (4)
Characters
5.0  (1)
Writing Style
4.0  (1)
Already have an account? Log in now or Create an account
The fun of miss popularity goes on!
April 29, 2013
Overall rating
4.3
Plot
4.0
Characters
5.0
Writing Style
4.0
The lost soul part is what made me read it! :)
Good Points
To lie and be lied (and bullied) is never fun so in short, this whole lying game Sutton, Charlotte and Madeline is what makes them popular but hated and backstabbed-in-gossips all along wherever they go. Almost all the too weird, too beautiful, too handsome, too confident, too geeky, too sexy, too naughty, too quiet, too shy people have been pranked already and these girls won’t get tired of it because according to their L rules, each of them gains a point whenever they call a prank better than the other and that is of course, a prank should always be fun and fabulous. But then we meet Emma, Sutton’s long-lost identical twin who suddenly play Sutton’s role to break the mystery going on while Sutton’s gone.

“Sutton’s dead,” says the note and Emma has to play her role or else she’ll be dead too but you know what, I love Emma more than Sutton because she’s wiser and she knows how to play the right way. It’s been tough for her to be passed from one foster home to another after being left behind by her biological mother Becky but she’s got both soft and tough heart to let her fight back despite always watching over her Mom Star, Dad Star, Emma Star and Boyfriend Star to come and meet her. :’( It’s an advantage on the other hand to Emma because she’s stronger to face this challenge to try and find her twin and the murderer.

I picked up The Lying Game from the store, not really expecting much. I wanted to choose a second book to read and the store was about to close, so I just grabbed it and checked out. I'm glad I did.
The Lying Game is about two long lost twins. Before you wrinkle your nose, thinking it's a huge cliche, you know you're in for a new twist on the cliche when Sara Shepard makes fun of it through the characters. I found this a nice little detail in an already great story.
The Lying Game follows the story of Emma and Sutton, as they try to piece together what happened before Sutton was killed and whodunnit. Only Emma can't hear or see Sutton, which I found actually kind of relieving. That would have been a whole other cliche. Instead, you feel Sutton's desperation as she realizes no one can see or hear her. This plays out rather badly as Sutton can only watch Emma, following her like a lost puppy wherever she goes, seeing only when Emma can see. I felt anxious for Sutton and Emma because at first, Emma doesn't know Sutton is dead. Emma thinks her twin is inviting her out to Arizona to reunite.
Emma then gets trapped in pretending to be Sutton, threatened by an unknown enemy that if she doesn't, there'll be severe consequences. The rest of the story slowly unfolds new memories for an amnesiac Sutton and new revelations for a terrified Emma. Emma finds out her twin wasn't what she hoped she'd be. She was actually kind of a witch.
Sutton was part of The Lying Game, a clique of four girls that got giggles from pranking people. Only they weren't your harmless jump-out-from-behind-something-and-go-boo! kind. They were far more harmful than that. But of course they had the code phrase 'Cross my heart, hope to die,' meant to be said if someone ever took the joke too far. So no one would ever take the joke too far.. right?
Overall, I found most of the characters felt quite real most of the time. Of course some parts of the book felt like filler, but I have yet to come across a book that doesn't have one single filler moment. The only characters that could have had a little more depth were the Twitter Twins and Garrett, although Garrett did grow a little throughout the story. There were also times that I wanted to reach in the book and smack Emma for not doing something I would have done. There were also some parts that didn't feel like they would play out quite like Sara Shepard wrote them.
All in all, though, I thoroughly enjoyed this first installment of what seems like a great book series. I am eagerly awaiting the release of Never Have I Ever and will definitely buy it when it comes out. If you enjoyed Pretty Little Liars or like books with catty girls, secrets, and lies, then I'd highly recommend this book as an addition to your collection.
I give The Lying Game a 5 out of 5.

The Lying Game is a book by Sara Shepard, the well-known author of Pretty Little Liars.  The book begins when Emma, a teenager who is in foster care, watches a video of a girl who looks exactly like her online. She discovers that the girl is her long-lost twin sister, Sutton. After sending Sutton a message on Facebook to which she replied, Emma sets out to meet Sutton by her home. After she arrives, Sutton's friends and family mistake Emma for her twin. Emma gets hurled into the mystery that surrounds her twin.
Overall, this is an excellent book that has many twists, turns, and parts that had me laughing or gripping my seat. You feel like you are in Emma's world as you read this book. This is an amazing book and i recommend it to everyone. The ending was the icing on the cake, and I can't wait to read the sequel, Never Have I Ever.

Sutton Mercer wakes up dead, at her long-lost twin sister, Emma's foster home. Sutton unable to communicate with her twin, is left to follow her, trying to uncover her murder. Emma sees a video of Sutton on YouTube and sets out to find her twin. Once Emma arrives at Sutton's town, she is mistaken as Sutton. When Emma tries to tell about her identity, she recieves a threatening message that tells her to keep pretending to be Sutton, or she'll die also. Now Emma has to find the killer of her sister before she's next.

This thriller was a promising start to a series. The mystery is laid out in a way where everyone is a suspect in murdering Sutton, everyone had a motive to get rid of the popular girl. I can't wait to read the sequel.