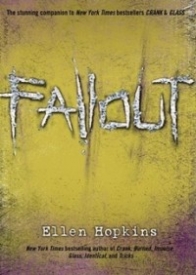 Hunter, Autumn, and Summer—three of Kristina Snow’s five children—live in different homes, with different guardians and different last names. They share only a predisposition for addiction and a host of troubled feelings toward the mother who barely knows them, a mother who has been riding with the monster, crank, for twenty years.
Hunter is nineteen, angry, getting by in college with a job at a radio station, a girlfriend he loves in the only way he knows how, and the occasional party. He's struggling to understand why his mother left him, when he unexpectedly meets his rapist father, and things get even more complicated. Autumn lives with her single aunt and alcoholic grandfather. When her aunt gets married, and the only family she’s ever known crumbles, Autumn’s compulsive habits lead her to drink. And the consequences of her decisions suggest that there’s more of Kristina in her than she’d like to believe. Summer doesn’t know about Hunter, Autumn, or their two youngest brothers, Donald and David. To her, family is only abuse at the hands of her father’s girlfriends and a slew of foster parents. Doubt and loneliness overwhelm her, and she, too, teeters on the edge of her mother’s notorious legacy. As each searches for real love and true family, they find themselves pulled toward the one person who links them together—Kristina, Bree, mother, addict. But it is in each other, and in themselves, that they find the trust, the courage, the hope to break the cycle.

Told in three voices and punctuated by news articles chronicling the family’s story, FALLOUT is the stunning conclusion to the trilogy begun by CRANK and GLASS, and a testament to the harsh reality that addiction is never just one person’s problem.
Tweet

Hunter longs to know why his mother deserted him. He's a DJ at a radio studio and in love with a beautiful girl. But he finds himself falling into Kristina's footsteps even through he fights it.

Autumn lives with her grandfather and aunt. When her aunt marries, she finds comfort in alcohol and the arms of a possessive guy.

Summer is in and out of foster care homes. Angry at not being the 'lucky' one, like Hunter.

All three feel some effects of Kristina's meth use. All three come together in the most unlikely way.

Wow. I mean just wow. I love Ellen Hopkins' writing and this conclusion to her book CRANK is just as strong and powerful. I love the lyrical voice that has one strong punch. The feelings are raw, gritty, and real.

The one scene where Hunter meets his biological father is intense. He starts out hating this man then realizes it's not all black and white.

Some very strong verses throughout. Some of my favorite have to be Summer's voice on the abuse she felt from one of her father's ongoing girlfriends:

...Cynical? Me? Yeah, maybe
I am, but then, why wouldn't
I be? Since the day I was born,
I've been passed around. Pushed
around. Drop-kicked around.

Great lines. This is the kind of writing that gives you goosebumps reading. And yes, tears too.

I highly recommend this book for fans of Hopkins. A must add collection to any library too.

Fallout happens to those left in the wake of substance abuse.  Fallout follows the lives of five children born to an addicted mother, Kristina.  Kristina's life takes a downward turn in the first book of this three part series, CRANK.  It then picks up again after her first child, Hunter, is born in GLASS.
Substance abuse affects more than just the abuser as evidenced in this thrilling third part series written in verse.  The aesthetics of the lines compels the reader to devour each word.
Kristina's five children, Hunter (now a young adult), Summer (in and out of foster care), Autumn (living with her aunt and grandfather while her father, Trey, is in prison and unaware her mother even exists), Donald and David (just young boys caught in the cross-hairs) search for who they are as well as where they came from in this moving fictional tale told by Hopkins to express how she feels her grandchildren have been affected by their mother's haunting lifestyle.
Even if you aren't involved in, or know someone who is involved in substance abuse, you will certainly want to read 'Fallout' by Ellen Hopkins to gain a deeper understanding into the wretched lives of those dealing with the fallout.

I can honestly say that Fallout is now on my list of most amazing books I have ever read. The moment I got it, I started reading and couldn't put it down. It's captivating and keeps your attention locked in the book from beginning to end.
If you're looking for a good book with drama, addiction, and suspense that could blow your mind, Fallout is the book for you.