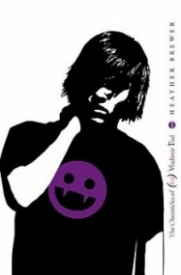 In Tenth Grade Bleeds, it’s another sucky year at Bathory High for Vladimir Tod. The evil vampire D’Ablo is hunting for the ritual that could steal Vlad’s powers. His best friend Henry doesn’t want to be his drudge anymore. And as if all that weren’t enough, it’s getting harder for Vlad to resist feeding on the people around him. When months go by with no word from Uncle Otis and D’Ablo shows up demanding Vlad’s father’s journal, Vlad realizes that having a normal high school year is the least of his concerns. Vlad needs to act fast, and even his status as the Pravus won’t save him this time . . .
Tweet

Overall rating
4.8
Plot
4.5  (2)
Characters
5.0  (1)
Writing Style
5.0  (1)
Already have an account? Log in now or Create an account
eddie the punk
June 10, 2012
Overall rating
5.0
Plot
5.0
Characters
5.0
Writing Style
5.0
vlad is dealing with eddie following him around and has to deal with his ex-friend trying to kill him in the last book. working with his uncle is the only thing that saves him. now he has people following him and can't even defend himself. their is no justice in elysia

Let's recap some of the school years, shall we? Eighth Grade: Bites. Ninth Grade: Slays. At least, it tries its best. And sure, biting and slaying are bad enough, but when one is bitten or in the process of being slayed, they tend to bleed. And Tenth Grade, my friends, Bleeds profusely.

"The council had been clear: "Bring us Vladimir Tod and your reward will be immeasurable." They never mentioned in what condition to bring him in, had barely stressed that he should be living. Little did they know, Ignatius didn't require payment. Causing the boy's suffering--and perhaps even his death, he thought with a pleasant shiver--would be reward enough."

Meet Vladimir Tod, your average, socially awkward teenager. He's always hungry, has an amazing best friend, a beautiful girlfriend, and lives with his loving aunt. The hidden downside? His hunger is for blood, his best friend is his human slave, a frightening side of him desires to eat his girlfriend (literally), and he's a half vampire. After surviving two painful attempts at murder, Vlad is facing the fact that he may always be fighting to survive. But first thing's first: surviving highschool. With Henry hiding something from him, Eddie Poe trying to expose him for what he truly is, and having to suffer through Health Class, highschool is definitely still hell. But what is a schoolyear for Vladimir Tod without a psycho stalker trying to kill him? Incomplete.

With the third volume of The Chronicles of Vladimir Tod series, Tenth Grade Bleeds, Heather Brewer once again amazes us with her ability to keep hearts racing and readers guessing. The Chronicles of Vladimir Tod is a saga that can not only be related to the lives of many teenagers, but also give them hope. Heather is a woman who knows full well how tough the lives of highschoolers can be, especially with bullying, and she captures that perfectly within Vlad, with a little extra gore. Although aimed at teens, this is a series that people of any age group can enjoy. It is terrifying, heart breaking, and witty, guaranteed to leave you thirsty for the next volume. Heather's first two novels are Eighth Grade Bites and Ninth Grade Slays.

Vladimir Tod is the ideal friend, boyfriend, and dorky highschool companion, just with a couple of fangs attatched.

a reader #1 Reviewer 20047 reviews
Report this review Comments (0) | Was this review helpful to you? 1 0
Powered by JReviews
How to resolve AdBlock issue?
X

Olivia Farr, Staff Reviewer
"THE GOOD SONG is a book about grief and finding beauty in the world around you. A little boy grows..."

Olivia Farr, Staff Reviewer
"NOW YOU SEE ME, NOW YOU DON'T is ultimately a book about kindness and camouflage. Chameleon loves his ability to..."

Olivia Farr, Staff Reviewer
"THE COWS ON THE BUS is a fantastically fun singing book that takes the tune of "The Wheels on the..."

Olivia Farr, Staff Reviewer
"PABLO is a simple but cute story about a chick that is not ready to hatch. It is time for..."

Olivia Farr, Staff Reviewer
"SHOE WARS is a silly fun middle grade read that is somewhere between a graphic novel and chapter book. The..."

Olivia Farr, Staff Reviewer
"SPIN WITH ME is a heartfelt middle grade contemporary about labels and love. Essie has been moved across the country..."