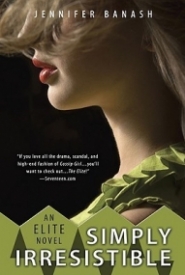 Small-town girl turned Big Apple beauty, Casey McCloy is really beginning to enjoy the high life in her high-rise. She's climbing the social ladder, to the dismay of her neighbor and rival, Madison Macallister. And Casey could end up as popular as Madison now that the two are set to star in their own reality show, "De-Luxe." But reality TV can be so unreal&

Madison loves the attention, but having every bit of her life caught on tape is often less than glamorous. Yet fame comes at a price-and she's willing to pay. Meanwhile, now that Casey and her almost-boyfriend Drew Van Allen are currently more off than on, she's beginning to wonder if everything in her life is just an illusion-and how much longer the illusion can last.

This third installment of The Elite series keeps the drama going! Simply Irresistible is just as entertaining as the first 2 books! Everyone's favorite characters are back, and you learn a thing or two about them all in turn. All the characters and their emotions are portrayed realistically. In Simply Irresistible, I felt like Drew almost was a bit over the top in parts - every girl he touches he lusts after. Those who loved the first 2 books will not be let down!

Small-town girl turned Big Apple beauty, Casey McCloy is really
beginning to enjoy the high life in her high-rise. She's climbing the
social ladder, to the dismay of her neighbor and rival, Madison
Macallister. And Casey could end up as popular as Madison now that the
two are set to star in their own reality show, "De-Luxe." But reality
TV can be so unreal . . .

Madison loves the attention, but
having every bit of her life caught on tape is often less than
glamorous. Yet fame comes at a price-and she's willing to pay.
Meanwhile, now that Casey and her almost-boyfriend Drew Van Allen are
currently more off than on, she's beginning to wonder if everything in
her life is just an illusion-and how much longer the illusion can last.


I'm
not sure what's happening with this series, but I don't like it much.
When I first started this series (a year ago tomorrow!) I really
enjoyed it. Casey was cool and normal and the other girls weren't bad.
And I didn't hate the second one either. Maybe I'm more judgmental then
I was then but I really didn't like this one.

Sophie was my favorite character. She's not as
shallow as the others and doesn't try to create drama. She's really
going through something tough in her life rather then a whole bunch of
"my parents suck and no one loves me" that we get from all the other
characters. (Except Drew, who is a man-whore too.) She was my favorite
to read about from the beginning and I think she has the most depth out
of all of them.

Along with the shallow characters and boring
"plot," the writing was enough to make me want to stop reading it. Half
the words in this book were adjectives. (No, I didn't count. I'm
guessing.)
For example, the second sentence of the book is: Her
legs, encased in dark-washed skinny jeans so tight they appeared
painted on, looked even longer and more stem-like due to the stretchy
denim that hugged every morsel of flesh from her nonexistent waist to
her delicate ankles.

What is this? Is Jennifer Banash
Charles Dickens reincarnated into a new, uber-girly form? My theory is
that the excessive use of adjectives is just to emphasize the wealth
and expensive clothing. I really hope that people, even ones like
Madison, don't seriously put that much thought into every aspect of
every outfit. Though, I do like that when we get Drew's perspective,
there are no obscure brand names mentioned, or barely any. Just Puma,
which I also love. He still describes it, but we get color names
instead of brand names.

But don't worry, there was at
least one glimpse of normal human emotion! Madison is worried about how
she didn't know what she wants to do after school. I was surprised to
get that much that I had to mark it with a sticky note.

Also, I
have heard that this book is meant to be a trilogy. And, by the way
this one ended, I think they're going to continue it. Because:
1. It's kinda a cliffhanger, but just barely.
2. The plot didn't have a climax. It was all rising action.
3. One of the character's life is going to change drastically, and they can't possibly cut it off there.
Truthfully, with this ending, I want more. Which leaves me confused. I disliked it, yet I want to read more. But it's not a just finished Hunger Games now I want Catching Fire want, so it's good.

So,
I do still stick by the "Elite is Gossip Girl with plot and
personality" thing. Sure, the plot and personalities aren't great, but
they're still there! And I know that some people really do like these
books. I don't understand it, but hey, most people don't like Swedish
Fish dipped in Peanut Butter (yum!) either. Having read the first
Gossip Girl book, I know that I don't like this kind of book (I'm not
just judging it blindly). It's just not my style. I may have disliked
it (as shown above) but that doesn't mean everyone will.

Also, I didn't hate it. Nope, I hate cheese and sour skittles. I disliked this
book. I've read worse and I might even read this book again at some
point. And I'll give it to my friends to read, because (sadly) they
love this kind of crap. But, again, I didn't hate it.

Olivia Farr, Staff Reviewer
"SALTY, BITTER, SWEET is a book about family, forgiveness, grief, and following your passion. Isabella dreams of being a world-class..."
break your glass slippers
4.0