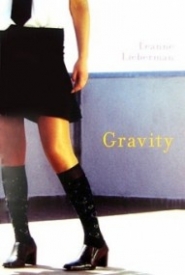 Ellie Gold is an orthodox Jewish teenager living in Toronto in the late eighties. Ellie has no doubts about her strict religious upbringing until she falls in love with another girl at her grandmother's cottage. Aware that homosexuality clashes with Jewish observance, Ellie feels forced to either alter her sexuality or leave her community. Meanwhile, Ellie's mother, Chana, becomes convinced she has a messianic role to play, and her sister, Neshama, chafes against the restrictions of her faith. Ellie is afraid there is no way to be both gay and Jewish, but her mother and sister offer alternative concepts of God that help Ellie find a place for herself as a queer Jew.
Tweet

A book about an Orthodox Jewish girl is not typically of general interest, but Gravity is an exception.   The issues that sixteen-year-old Ellie faces are faced by most teens in one form or another:  faith, sexuality and family.  And the way that Leanne Lieberman handles them in her debut novel is thoughtful, thought provoking and tender.

Ellies reborn Jewish parents are going to Israel for the month of August.  Ellie is going to her Bubbies (grandmothers) summer lake cottage.  Her older sister, Neshama, is a counselor at an all girl summer camp.  Neshama, in her own way, has rebelled against her parents beliefs and traditions for several years:  she does not wear the typical Orthodox garb of long sleeves and long dresses, she is applying to business colleges against the wishes of her parents who want her to follow in their footsteps and teach at a Hebrew school, she asks pointed questions of her teachers.  Ellie, on the other hand, embraces her religion, both out of upbringing and faith.

At the lake, Ellie meets Lindsay and is attracted to her immediately; her long hair, her skin, her shape.  As the story progresses, the reader learns that Ellie has been attracted to girls before but never acted upon it.  However, Lindsay initiates a kiss which all but causes Ellie to fall in love.  Readers will observe is that Lindsay is obviously experimenting while Ellie is for real, causing additional drama.

Ellie must first determine whether or not she is a lesbian.  If so, she must reconcile her sexuality with the Torah and the teachings of the rabbis.  Finally, she must break the news to her parents.  While Ellie is going through this, other issues confront her sister and her parents; issues that will undoubtedly affect Ellies beliefs.

Lieberman handles Ellies issues so well and while they deal directly with an Orthodox Jewish girl, they can be broadened to include any religion or any family.  Religion in general rejects homosexuality causing some to question its teachings and their individual faith.  The responses of family and friends to ones coming out varies, however, they can be very harsh.

Lieberman has populated Gravity with truly supportive characters such as Bubbie and Neshama.  It also is peopled with those know it alls who look down their noses at people who are different.  In other words, it is realistic.  The writing is simple, straight-forward and descriptive.  The action is well paced.

You as a reader will really like Ellie and Neshama and their family.  You will empathize with their feelings and beliefs.  You will feel satisfied with the storys ending.  You will enjoy Gravity.

Ed Goldberg Top 50 Reviewer 133 reviews
Report this review Comments (0) | Was this review helpful to you? 1 0