Jo-Jo and the Fiendish Lot 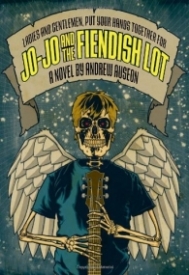 Jo-Jo Dyas thinks it's his fault when his girlfriend Violet
is killed for dating him. Without Violet, his life is meaningless. Just as
Jo-Jo was about to pull the trigger and end his sad, pathetic life forever, he
meets a dead girl named Max. Max lives in the Afterlife, where she is the
drummer for a band called the Fiendish Lot. Max convinces Jo-Jo that death is
overrated and introduces him to the other members of her band. One thing led to
another, Jo-Jo manages to land himself in the Afterlife as well. There, he must
make something of his afterlife before he is lost forever.


Jo-Jo and the Fiendish Lot is a supernatural novel
that candidly depicts grief, changes, depression, and all that jazz. The story
really is a dark one, which is fitting for a novel about death. For a book
about death, it really taught a lot about appreciating life. I did wish for a
better ending for Jo-Jo though; but for the most part, I'm pleased with it. It
wasn't too drastic, but it was in accordance to the events leading up to it. Jo-Jo
may not have had a wonderful life, but at least he learned more about himself
in the Afterlife. The plot seemed a bit slow at times, but it accelerated as
the story progressed. For the most part, I love this novel, and I'm overjoyed
that I had the chance to read it.


Throughout the story, Jo-Jo spends a great deal of his time
moping about Violet, and this trait would've irritated me after awhile if the
characters didn't reprimand him for sulking. The best thing about having the
novel told from Jo-Jo's point of view is that his character is very
well-developed. The story's told with an effortlessly natural voice, yet it is
bizarrely innovative and imaginative.


Max was an exceptional character; you rarely encounter such
a feisty and forthright character in literature. Ironically enough, she marches
to the beat of her own drum; she says what she thinks, regardless of others'
feelings. However, she is compassionate, a quality that shined through when she
saved and hand-delivered all the sentimental things of the Afterlife residents.
I found her to be a fantastic character foil to Jo-Jo.


What I love most is the descriptions about the band and
their effects on the residents of the Afterlife. Music is an amazing thing; it
cleanses the soul and helps you express yourself, as the characters came to
find out.


It was also interesting how the characters of the Afterlife
have their own lingo. For example, they sometimes add "like" to the
end of words, using terms such as "great-like". It was slightly
bothersome at first, but I quickly got used to it.


Lively, rhythmic, thrilling, and unusual, Jo-Jo and the
Fiendish is a special novel that you can
rock out too.

After Jo-Jo Dyas girlfriend Violet is killed, he doesnt think he has any reason to live anymore. On the morning he plans to commit suicide, he finds a naked dead girl floating in a river, and instead of following through with his original plans, he follows this girl Max as she rounds up the other members of the band she drums for, the Fiendish Lot. But after their impromptu concert, Jo-Jo accidentally completes the task he had wanted to do that morning, thus traveling to where Max and the Fiendish Lot are from, the Afterlife. Jo-Jo is lost in this new world until Max rescues him and shows him the ropes. The Afterlife is a time of second chances, but all Jo-Jo does is tag along the Fiendish Lots band tour and look for Violet. Jo-Jo and the Fiendish Lot is a unique and unforgettable novel about life, death, and acceptance.

I am pleased to say that my high expectations for this novel were exceeded. I immensely enjoyed Auseons unique version of death and the afterlife because it was so creative and entirely unlike any other book Ive read on the same topic. The new world of the Afterlife that Auseon creates is such a perfect setting for Jo-Jos story. From the very first page, I was drawn into Jo-Jos tale and his adventures along with the quirks of the Afterlife and the members of the Fiendish Lot held my interest for the rest of the novel. The majority of Jo-Jos story is an emotional journey as he reflects on his life, his relationships with Violet and Max, and his purpose. Jo-Jo, Max, and even Violet were wonderfully developed and I felt I got to know them rather well. I liked how this novel didnt focus on how Jo-Jo dealt with his own death per se but on how he held onto other aspects of his life; in a way, however, this was paradoxical because Jo-Jo was portrayed as rather selfish. The Fiendish Lots music and its effects on Jo-Jo werent perfectly woven into Jo-Jos tale but it was done well enough that I felt connected. Overall, I was very impressed with this novel.