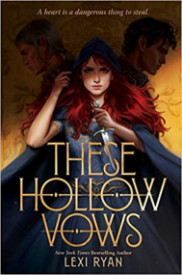 From New York Times best-selling author Lexi Ryan, Cruel Prince meets A Court of Thorns and Roses in this sexy, action-packed fantasy about a girl who is caught between two treacherous faerie courts and their dangerously seductive princes. Brie hates the Fae and refuses to have anything to do with them, even if that means starving on the street. But when her sister is sold to the sadistic king of the Unseelie court to pay a debt, she'll do whatever it takes to get her back—including making a deal with the king himself to steal three magical relics from the Seelie court. Gaining unfettered access to the Seelie court is easier said than done. Brie's only choice is to pose as a potential bride for Prince Ronan, and she soon finds herself falling for him. Unwilling to let her heart distract her, she accepts help from a band of Unseelie misfits with their own secret agenda. As Brie spends time with their mysterious leader, Finn, she struggles to resist his seductive charm. Caught between two dangerous courts, Brie must decide who to trust with her loyalty. And with her heart.

riveting and enchanting YA fantasy
July 12, 2021
Overall rating
5.0
Plot
5.0
Characters
5.0
Writing Style
5.0
THESE HOLLOW VOWS is a stunning and riveting YA fantasy with strong world-building and captivating writing. Brie lives with her sister in a tiny basement room and works for her aunt as an indentured servant. In this world, humans are often left without choice beyond creating life contracts that force them into servitude and are impossible to escape with penalties, fees, and interest. Brie entered into this contract when she was young and has now resorted to dangerous stealing to make the monthly payments.

However, when it is not enough, her younger sister's contract is sold anyway - to the worst possible person, the king of the Unseelie fae court. Brie will do anything to save her sister, and their treacherous king is counting on it. As she navigates a new bargain with him, she finds herself caught between two princes - the prince of the Seelie court, Prince Ronan, whose trust she must hold to be able to give the Unseelie king what he needs - and the rightful heir of the Unseelie court, Finn, who is trying to save his people as a banished outsider.

As she navigates the lies and untruths she is told, Brie must decide what of herself and others she is willing to sacrifice to save her sister. When all the dust settles, what would she want for herself?

What I loved: This is a masterfully plotted and perfectly paced read that quickly draws the reader in and keeps them reeling from twist after twist after twist. I absolutely did not see the end of the book coming, and it had me rethinking and rehashing many of the earlier reveals, as the crumbs were there. I love a book that can shock me, and this one delivered big time - I cannot wait to see where this series will go.

Brie was absolutely a highly compelling character, and she must redefine herself several times over during the course of the book. She has hated the fae since her mother left her and her sister to follow the fae she loved into the magical land and never looked back, leaving them to struggle in poverty. As she gets to know more about this other world, she must decide what she wants to stand for and what she wants her life to mean. Morality here is gray, with things neither fitting in good or evil, and this causes a reckoning for Brie as well. Other characters, particularly Finn and Sebastien, were also compelling, though, as we see them as Brie does, they are full of half-truths and untruths. I am curious to learn more about both, and the others around them, in future books.

The world-building was really fascinating, as the reader gets to see both the fae world and the consequences of its attachment to the human realm. The mythology that we get pieces of was really fascinating, and I loved the stories that she and her sister are able to recount from their mother. This atmospheric story really pulls the reader into this other world with the descriptions, characters, and history. We are only able to scratch the surface here on some topics, as we learn while Brie does, so I look forward to learning more in future books.

The book also touches upon some really thought-provoking themes around the morally gray, human nature, greed, power, wealth disparity, and the nature of free will when other options are just untenable. I found this last one to be a powerful thought as the reader must consider the seemingly bad choice to sign one of these contracts - but what if the alternative is death of a loved one, starving to death, or some other ghastly consequence? It could be considered free will as they still have a choice, but what is a choice when there are no good options? This was a theme that I would be interested to discuss further, and it also develops during the book, as we begin to see the consequences of these contracts. Another theme around love and trust and whether they can develop when they are also a means to an end is a theme I look forward to exploring as the books continue.

Final verdict: Enchanting, atmospheric, and shocking, THESE HOLLOW VOWS is a riveting and compelling YA fantasy read, perfect for fans of A COURT OF THORNS AND ROSES, THE SHADOWS BETWEEN US, and RED QUEEN.

Paige Cee, Staff Reviewer
"Everything I know about K-pop comes from thirsty Twitter fancams, what has made it into the American mainstream, and an..."

Paige Cee, Staff Reviewer
"WHAT I LOVED: Tavia and Effie’s world is ours with just a little myth-made-real on top. The Hart family..."

Paige Cee, Staff Reviewer
"WHAT I LOVED: Marlowe has spent much of her life living on the edge of death thanks to a..."

Paige Cee, Staff Reviewer
"Content warnings: rape, sexual harassment, sexual abuse Once upon a time, I had an ambition to become a journalist...."

The Hawthorne Legacy (The Inheritance Games, 2)
5.0

Connie Reid, Site Manager
"What I Loved: THE HAWTHORNE LEGACY, a sequel to THE INHERITANCE GAMES, is a book full of intrigue and mystery..."

Olivia Farr, Staff Reviewer
"THE COST OF KNOWING is a heartbreaking and beautiful read about family, fate, and racism. After losing his parents and..."

Laurel
"* I received an eARC of this book through Edelweiss+ for an honest review* “When..."

Between Perfect and Real
5.0

Olivia Farr, Staff Reviewer
"BETWEEN PERFECT AND REAL is a heartfelt read about finding yourself and coming out. Dean knows that he is a..."

Olivia Farr, Staff Reviewer
"YOU WERE MADE FOR ME is a comedic YA contemporary/magical read about two friends, Katie and Libby, who somewhat accidentally..."

Olivia Farr, Staff Reviewer
"WHAT I LIKE ABOUT ME is a charming and comical YA contemporary read that tackles some important themes. Maisie is..."

Beth Rodgers, Staff Reviewer
"'When You Know What I Know' by Sonja K. Solter is a beautiful story of a girl who is soul-searching..."