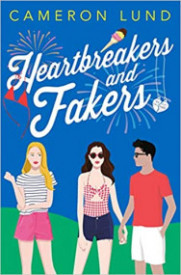 From the author of The Best Laid Plans comes another fresh voiced, hilarious rom-com perfect for fans of You Have a Match and The Rest of the Story. Penny Harris just ruined her life. As one of the most popular girls in school, she's used to being invited to every party, is dating the Jordan Parker, and can't wait to rule senior year with her best friend, Olivia. But when Penny wakes up on Jordan's lawn the morning after his first-day-of-summer bash, she knows something went terribly wrong the night before. She kissed Kai Tanaka. Kai, her long-time nemesis. Kai, Olivia's boyfriend. Penny can't figure out what could have inspired her to do it--she loves Jordan and she would never hurt Olivia--but one thing's for sure: freshly dumped, and out a best friend, the idyllic summer she pictured is over. Despite the fact that Jordan seems to be seeking comfort (and a whole lot more) in Olivia, all Penny can think about is winning him back. Kai wants to save his relationship too, so they come up with a plan: convince their friends that they really do have feelings for each other. After all, everyone forgives a good love story, and maybe seeing Penny and Kai together will make Jordan and Olivia change their minds. But as summer heats up, so does Penny and Kai's "relationship," and Penny starts to question whether she's truly faking it with Kai, if he's really as terrible as she always thought he was, and if the life she's fighting so hard to get back is the one she really wants.

riveting and compelling YA contemporary romance
June 05, 2021
Overall rating
5.0
Plot
5.0
Characters
5.0
Writing Style
5.0
HEARTBREAKERS AND FAKERS is a consuming YA contemporary romance that I absolutely devoured. Penny wakes up on the lawn after a night of heavy drinking that she was supposed to have spent with her boyfriend, Jordan. When she goes inside to find him, she is confronted by her best friend, Olivia, who is shockingly angry with her. She soon finds out that the night before, she kissed her arch-nemesis, Kai, Olivia's boyfriend, thus cheating on her best friend and the boyfriend she loves.

When it starts to seem like it could be forgivable if it was for true love, Penny and Kai decide to fake date and act like they are in love, making Olivia and Jordan jealous and hopefully winning them back. However, nothing seems to be going according to plan, and Penny must re-evaluate the relationships in her life, getting to the truth behind the facade.

What I loved: The book is told in two timelines, the present in the summer, and the past year when they were juniors, leading up to and during her relationship with Jordan. These dual perspectives were intriguing and gave better understanding to Penny, her friendships, and her relationship. Ultimately, there were some great messages about true friendship, loyalty, depth of connection, and problematic mean girl behavior.

Penny was very anxious about her popularity and having other people like her. This stems in part from her childhood, with the father who left them to stay with his wife, and the mother who is working or dating all the time, merely leaving notes and money for food for her and her brother. During this summer of turmoil, when her friendships are tenuous or broken, Penny has time to evaluate the people around her and the relationships she wants. For instance, she begins working with a girl she used to be really good friends with, Sarah, but she now makes fun of with Olivia and crowd. Seeing her perspectives and beginning to think about the people who bring value to her life, Penny does some deeper reflections and re-evaluation of her role in the past and her own priorities.

In terms of the romance, I really loved it. I love fake dating, and I love enemies-to-lovers, and this gave me both and then some. The swoon factor here was very high. Like Myriah, I ship them, OTP for sure. There was one scene in particular that just stole my heart. People who love romance will love this book, for serious.

I also really appreciated the side characters that help make this such a fantastic read. Penny's brother, Seb, is wise beyond his years and adds something special to the story. Sarah is also brilliant with her fierce confidence and cool band, who also teaches Penny so much about friendship. Myriah is another really sweet character. This book is filled with compelling characters who were fully constructed.

The beginning of the book had a bit of suspense feel, and we really get thrust into Penny's feelings as she tries to piece things together and decide how she'll move forward. Overall, I'd place it as contemporary romance. There are some really great themes about acceptance, standing up for others, the shallowness of popularity, the importance of love that stems from deeper knowing, the limited nature of high school (even though it feels life consuming), the importance of communication, privilege, and the harm of stereotyping.

Final verdict: Swoon-worthy, charming, and riveting, HEARTBREAKERS AND FAKERS is a fantastic YA contemporary that I will be recommending for everyone.

Paige Cee, Staff Reviewer
"Everything I know about K-pop comes from thirsty Twitter fancams, what has made it into the American mainstream, and an..."

Paige Cee, Staff Reviewer
"WHAT I LOVED: Tavia and Effie’s world is ours with just a little myth-made-real on top. The Hart family..."

Paige Cee, Staff Reviewer
"WHAT I LOVED: Marlowe has spent much of her life living on the edge of death thanks to a..."

Paige Cee, Staff Reviewer
"Content warnings: rape, sexual harassment, sexual abuse Once upon a time, I had an ambition to become a journalist...."

The Hawthorne Legacy (The Inheritance Games, 2)
5.0

Connie Reid, Site Manager
"What I Loved: THE HAWTHORNE LEGACY, a sequel to THE INHERITANCE GAMES, is a book full of intrigue and mystery..."

Olivia Farr, Staff Reviewer
"THE COST OF KNOWING is a heartbreaking and beautiful read about family, fate, and racism. After losing his parents and..."

Laurel
"* I received an eARC of this book through Edelweiss+ for an honest review* “When..."

Between Perfect and Real
5.0

Olivia Farr, Staff Reviewer
"BETWEEN PERFECT AND REAL is a heartfelt read about finding yourself and coming out. Dean knows that he is a..."

Olivia Farr, Staff Reviewer
"YOU WERE MADE FOR ME is a comedic YA contemporary/magical read about two friends, Katie and Libby, who somewhat accidentally..."

Olivia Farr, Staff Reviewer
"WHAT I LIKE ABOUT ME is a charming and comical YA contemporary read that tackles some important themes. Maisie is..."

Beth Rodgers, Staff Reviewer
"'When You Know What I Know' by Sonja K. Solter is a beautiful story of a girl who is soul-searching..."