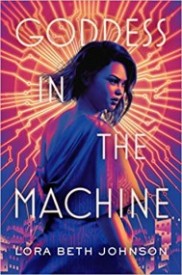 Andra wakes up from a cryogenic sleep 1,000 years later than she was supposed to, forcing her to team up with an exiled prince to navigate an unfamiliar planet in this smart, thrilling sci-fi adventure, perfect for fans of Renegades and Aurora Rising. When Andra wakes up, she's drowning. Not only that, but she's in a hot, dirty cave, it's the year 3102, and everyone keeps calling her Goddess. When Andra went into a cryonic sleep for a trip across the galaxy, she expected to wake up in a hundred years, not a thousand. Worst of all, the rest of the colonists--including her family and friends--are dead. They died centuries ago, and for some reason, their descendants think Andra's a deity. She knows she's nothing special, but she'll play along if it means she can figure out why she was left in stasis and how to get back to Earth. Zhade, the exiled bastard prince of Eerensed, has other plans. Four years ago, the sleeping Goddess's glass coffin disappeared from the palace, and Zhade devoted himself to finding it. Now he's hoping the Goddess will be the key to taking his rightful place on the throne--if he can get her to play her part, that is. Because if his people realize she doesn't actually have the power to save their dying planet, they'll kill her. With a vicious monarch on the throne and a city tearing apart at the seams, Zhade and Andra might never be able to unlock the mystery of her fate, let alone find a way to unseat the king, especially since Zhade hasn't exactly been forthcoming with Andra. And a thousand years from home, is there any way of knowing that Earth is better than the planet she's woken to?

Goddess In The Machine
July 10, 2020 (Updated: July 10, 2020)
Overall rating
5.0
Plot
5.0
Characters
5.0
Writing Style
5.0
Andra went into cryonic sleep for a hundred years for a trip across the universe to wake up as a colonist on a new planet. Only she wakes up a thousand years in the future and finds out that the people on the planet call her 'Goddess'. She's told her family and the other colonists are dead. Zhade, is the exiled bastard prince of Eerensed. Once he wakes Andra, he plans on using her for his own purposes which includes removing his brother from the throne. Andra finds out in order to survive she must play along with Zhade's plans. In the meantime, she tries to find a way to leave the planet.

What worked: Captivating Sci-Fi tale of a teen who wakes up a thousand years in the future to a world that considers her a goddess. Andra knows she's far from being that. She still struggles with insecurities of not being 'enough', even after she finds out her mother and family are long dead.

I really enjoyed this story! Zhade is that handsome, charismatic prince who just happens to be exiled. The chemistry between Andra and Zhade is real, even when she knows he's only manipulating her to get back to his rightful place as ruler of Eernesed.

There's so much more to this then just a futuristic story. The world building of Eerensed with the waste lands to the opposing factions like the Schism are vivid. Also there's remnants of what appears to be technology from Earth. This includes a Crown on Maret, Zhade's half-brother, head, which in reality control nanos. Maret uses this to keep his people in control, but also tries to use Andra to help rebuild the dome protecting his world.

There's hints of what really is going on in Eernesed. I admit, it took me a while to figure it all out, but when I did? Wow. Just wow.

ACROSS THE UNIVERSE meets The 100, readers are sure to be riveted to each page as they follow Andra's search to unlock her own fate. Twists and turns throughout this very imaginative, engaging story. I wanted to know what happens next!
Good Points
1. Futuristic suspense

Kim Baccellia, Staff Reviewer Top 10 Reviewer 679 reviews
Report this review Comments (0) | Was this review helpful to you? 0 0
compelling YA sci-fi
June 11, 2020
Overall rating
4.7
Plot
5.0
Characters
5.0
Writing Style
4.0
GODDESS IN THE MACHINE is a compelling YA sci-fi that follows Andra after she is woken up from cryo'sleep. Andra grew up in an era of technology, where people have 'implants that help them to control nano'bots around them. The nano'bots can be purposed to heal, build, or whatever is needed. However, the Earth is dying, and a million colonists have been chosen to set out for a new planet far away. They will be cryogenically frozen for a hundred years, while the ship transports them to Holymyth, the new planet.

However, when Andra wakes up, nothing seems to be as she expected. She soon learns that instead of a hundred years passing, a thousand have passed. Humanity is barely surviving, and she is worshiped as a goddess- the Third Goddess. The boy who woke her, Zhade, had been exiled from a relatively safe city, Eerensed, four years ago, and he will be using her to barter his way back in. Once she arrives, she learns that the city is failing, and she is supposed to save it. However, Andra does not know how to work with the new technology different than her own or all the politics at play.

What I loved: The premise of this is really intriguing, and the world is beautifully crafted. We get an interesting feel for the world in the future, including the evolution of language and humanity that is quite well-developed. Andra is a highly sympathetic character, and I loved the way she evolved in the impossible situation in which she found herself. There are quite a lot of mysteries in the book, such as why she was never woken from cryo'sleep until then, and we get most of the answers in this first book. There was a major reveal later in the book that completely shocked me, and I loved the surprise.

What left me wanting more: The book moves slowly in places, and like Andra, it is hard to learn this new future language that evolved from our own with its own slang and changed terms. However, I do think this adds to the experience, as we can view the difficulties she faces first-hand.

Final verdict: Overall, this is a compelling and intricately crafted YA sci-fi that takes us into the far future. Highly recommend for fans of ACROSS THE UNIVERSE, DEFY THE STARS, THESE BROKEN STARS, and UNDER THE NEVER SKY. This is a series that I would definitely love to see more from.