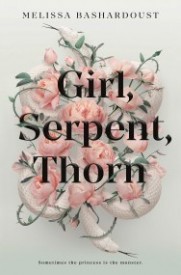 A captivating and utterly original fairy tale about a girl cursed to be poisonous to the touch, and who discovers what power might lie in such a curse... There was and there was not, as all stories begin, a princess cursed to be poisonous to the touch. But for Soraya, who has lived her life hidden away, apart from her family, safe only in her gardens, it’s not just a story. As the day of her twin brother’s wedding approaches, Soraya must decide if she’s willing to step outside of the shadows for the first time. Below in the dungeon is a demon who holds knowledge that she craves, the answer to her freedom. And above is a young man who isn’t afraid of her, whose eyes linger not with fear, but with an understanding of who she is beneath the poison. Soraya thought she knew her place in the world, but when her choices lead to consequences she never imagined, she begins to question who she is and who she is becoming...human or demon. Princess or monster.

Girl, Serpent, Thorn
March 25, 2020 (Updated: March 25, 2020)
Overall rating
4.0
Plot
5.0
Characters
3.0
Writing Style
4.0
GIRL, SERPENT, THORN is a YA fairytale retelling by Melissa Bashardoust. The story follows Soraya, a princess who is cursed to kill any breathing being, human or insect, by mere touch. To stay safe, Soraya’s family has made her hide away for most of her life, scared that the public would question her family’s reign if they knew of the princess’ evil ability. Soraya, though, is tired of hiding in the shadows, and a boy, Azad, newly brought into the castle for heroically saving the shah’s life, thinks she shouldn’t. With Azad’s help, Soraya begins to search for a way to undo her curse. However, she’s not operating with all of the facts, and the wrong choice could cost her everything.

According to Bashardoust, this novel has a variety of influences, including Sleeping Beauty and Rappaccini’s Daughter, but is primarily drawn from the legendary Persian epic, the Shahnameh, a book written in eleventh century CE that details the shahs of Iran. As such, this story feels both familiar and exotic, and I love being introduced to lore from a non-western culture. Because I was learning new words and customs, my imagination was fully invested.

This book has many fantastical elements, such as magical beings known as Divs. These beings are so interesting, particularly the Pariks, and I would love to read more stories set amongst them. With that being said, for as much richness that the magic brings to the book, Soraya’s magic in particular took me out of the story. For the longest time, I didn’t know that someone would only die from touching Soraya’s bare skin. Instead, I thought they just needed to touch her anywhere, so Soraya going out into a crowd on Nog Roz seemed much more dangerous than I originally thought. Also, if Soraya could do that, risky or not, I don’t understand why Soraya’s mother never found ways to lovingly touch her own daughter, or why Soraya couldn’t keep company beyond Laleh and her brother. If Soraya’s curse parameters had been clearer, and more dangerous—she only ever accidentally kills one person as an infant—then, I would have been able to get into the story much faster. Instead, this fostered a disconnect that continued for the rest of the book.

After establishing the setting, Bashardoust successfully breaks expectations in a very fast and inventive way. The major twist is amazing and sets the story on a very different path that I enjoyed. Soraya is put in the most difficult circumstances and it is fun to see how she finds her way out of them. The plot is smart and lush with detailed world-building that makes it easy to picture. However, the relationships feel weak, which seems to be a consequence of Soraya’s curse not being fully fleshed out.

With that being said, GIRL, SERPENT, THORN is an inventive tale that will appeal to anyone who likes stories about royalty, characters who are all good and bad, and magical creatures.

Olivia Farr, Staff Reviewer
"THIS IS YOUR WORLD is a lovely picture book that introduces the world and the importance of taking care of..."

Olivia Farr, Staff Reviewer
"YAWN is a cute book about the contagious nature of yawns. A little boy begins a yawn that carries through..."

Olivia Farr, Staff Reviewer
"THE BEAR IN THE BOAT is a sweet story of kindness and helping your neighbors. A storm is arriving, and..."

Olivia Farr, Staff Reviewer
"IT'S BATH TIME! is an adorable installment in the Indestructibles series. The book features baby animals and baby who have..."

Olivia Farr, Staff Reviewer
"I REALLY, REALLY NEED TO PEE! is a silly picture book about a bush baby that is out and about..."