Jack Kerouac is Dead to Me 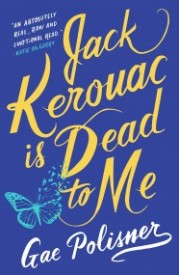 Fifteen-year-old JL Markham's life used to be filled with carnival nights and hot summer days spent giggling with her forever best friend Aubrey about their families and boys. Together, they were unstoppable. But they aren't the friends they once were. With JL's father gone on long term business, and her mother suffering from dissociative disorder, JL takes solace in the in the tropical butterflies she raises, and in her new, older boyfriend, Max Gordon. Max may be rough on the outside, but he has the soul of a poet (something Aubrey will never understand). Only, Max is about to graduate, and he's going to hit the road - with or without JL. JL can't bear being left behind again. But what if devoting herself to Max not only means betraying her parents, but permanently losing the love of her best friend? What becomes of loyalty, when no one is loyal to you?

Jack Kerouac is Dead to Me
January 17, 2020 (Updated: January 17, 2020)
Overall rating
4.3
Plot
4.0
Characters
4.0
Writing Style
5.0
JACK KEROUAC IS DEAD TO ME is Gae Polisner’s most recent YA Contemporary novel. Like in her other books, she tackles difficult subjects, such as mental illness, absentee parents, alcoholism, and growing up. Also, like her other books, it’s fantastic. The story follows JL Markham, a soon-to-be sixteen year old girl, who has her first serious boyfriend, but no one to help her navigate the relationship. JL and her former best friend, Aubrey, have grown apart, JL’s mother is unwell and doesn’t seem to be getting any better, JL’s father has moved to the other side of the country, and JL’s grandmother has taken to pretending everything is fine when it’s clearly not. Without anyone to turn to, JL’s supposedly derelict boyfriend has the perfect opportunity to corrupt her for good, which is exactly what Aubrey expects him to do.

My favorite part about this novel, and Polisner’s novels in general, is how she’s able to warp the timeline in a way that is both artistic and dramatic. This story swings between the past with flashbacks, present day with the main storyline, and the future with JL’s letter to Aubrey. As a result, there is a general sense of foreboding that I feel right in the beginning and a strong urge to find out what will happen. I also love how this book makes me think about my female relationships growing up and how difficult they were. Girls aren’t always kind to one another and Polisner paints JL’s and Aubrey’s friendship in such a realistic, tangible way.

The ending, however, left me with a lot of questions. Even though there are breadcrumbs early on to hint at what’s to come, I’m still surprised by JL’s hotel revelation. She doesn’t allow for an explanation as to how or why it happens, which makes it even harder to accept. I also want to see JL confront her father about why he has not come home, so I can understand his character more. Sometimes, he seems like a caring father, which makes it confusing as to how he could leave his daughter alone with his wife. Furthermore, because of what happens with the letter, I want to know the fate of JL’s and Aubrey’s friendship. On one hand, I appreciate that the ending mimics real life. Like JL, we don’t know what’s going to happen next. On the other hand, I need a bit more resolution and I’m hoping there will be a second book.

With that being said, anything written by Gae Polisner is a true treat. She commands her craft in a way very few do, and I consider her to be the best voice in the YA Contemporary space. JACK KEROUAC IS DEAD TO ME is my favorite book of Polisner’s to date, and besides that, the title is absolutely brilliant. To understand the meaning, you’ll have to read the book, which I highly recommend.

Olivia Farr, Staff Reviewer
"ZOE ROSENTHAL IS NOT LAWFUL GOOD is a fun YA contemporary about embracing what you love and finding your people...."

Samantha Randolph, Promotions Manager
"While being forced to clean an old room in her Catholic school, Maeve finds an old tarot deck that instantly..."

Olivia Farr, Staff Reviewer
"JUST OUR LUCK is a charming YA contemporary about loss, anxiety, and friendship. Leo is a bit of a loner,..."